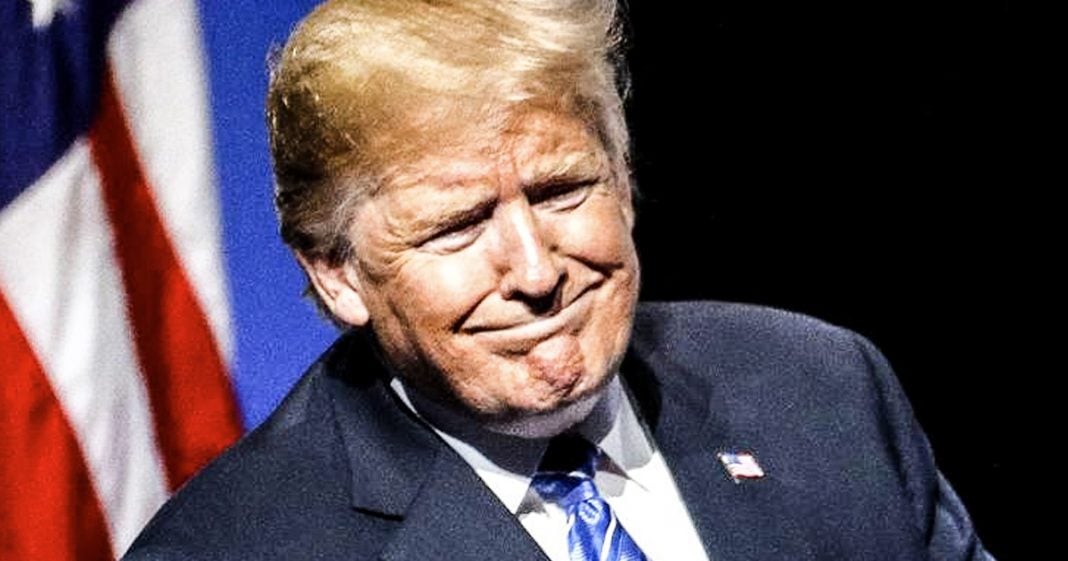 On Tuesday morning Donald Trump told the world on Twitter that he absolutely LOVES tariffs and that we should, too. A few hours later, his administration was crafting a $12 billion bailout package for American farmers that have had their lives ruined by Trump’s tariffs. So not only are we losing the trade war, but now we’re technically losing TWICE because taxpayers have to fix the mess that Trump created. Ring of Fire’s Farron Cousins discusses this.

On Tuesday morning, Donald Trump was on Twitter telling us that tariffs were great. He loves tariffs and we should too. His trade wars are doing remarkable things for the United States. Yeah, people are hurting and losing their jobs, but according to him, we just have to trust him, we just have to stick with him, because things are totally going to get better very soon, and to be honest, things aren’t even that bad right now, Trump tells us. A few hours after he was tweeting those things, his own administration announced, “We’re going to be giving a 12 billion dollar bailout to American farmers because of how bad things have gotten for them because of Donald Trump’s trade wars.” So after telling us that tariffs were great, trades wars were fun, and that everything was hunky-dory, we find out that we, the taxpayers, are now on the hook for 12 billion dollars that’s going to be given to farmers.

I have no problem helping other people that need it, and obviously, these farmers need it, but we have to understand that first and foremost, we already give billions of dollars in farm aid every single year. Anything beyond that starts to get a little excessive, not to mention an additional 12 billion because of the policies of Donald Trump. He is the sole person who has enacted these tariffs, did not have to get Congressional approval, he did it, and now his own administration, again without going through Congress, tells us, “We’re going to spend 12 billion dollars to fix the lives of these people that Trump destroyed.” The only reason he cares about this right now is because it is a re-election issue. Those are red states that are being hit the hardest with Donald Trump’s trade wars, in case you didn’t realize that, and he wants to make those people better, at least temporarily, or at least until we get through mid-November and the midterms are behind us. That’s what this is about.

And here’s what the U.S. Department of Agriculture is going to do here. First and foremost, if you’re a farmer and you’ve lost a certain amount of money due to the trade wars, you can apply for this 12 billion dollar bailout. Second, what the Department of Agriculture’s going to do, is they’re going to swoop in with some of this 12 billion dollars and just start buying up all of the excess crops, and cattle, and hogs that these farmers cannot sell overseas anymore so they’re going to buy them up. So, now the government is going to have this stock of food that they don’t know what to do with it. They say they’re going to give some of it to homeless shelters maybe, to the needy, work it out that way, I guess. But at the end of the day, we’re going to still end up with a ton of wasted food product here in the United States, farmers are going to get a temporary band-aid, and U.S. taxpayers are the ones who foot the bill.

I mean, here’s the thing though. Yes, we have farmers suffering and yes, we already give them billions of dollars in aid, but if we’re going to hand them over another 12 billion because things are bad for them, how about we hand our 12 billion dollars to people suffering from student loan debt. How about we hand out 12 billion dollars so that people who are drowning in medical debt can get out from under that. We can’t just pick and choose which suffering groups we’re going to help. If we want to help people, and we have the money to do it, we need to help everyone, because farmers are not the only people here suffering. They just happen to be suffering at the moment from the horrid policies of this administration.