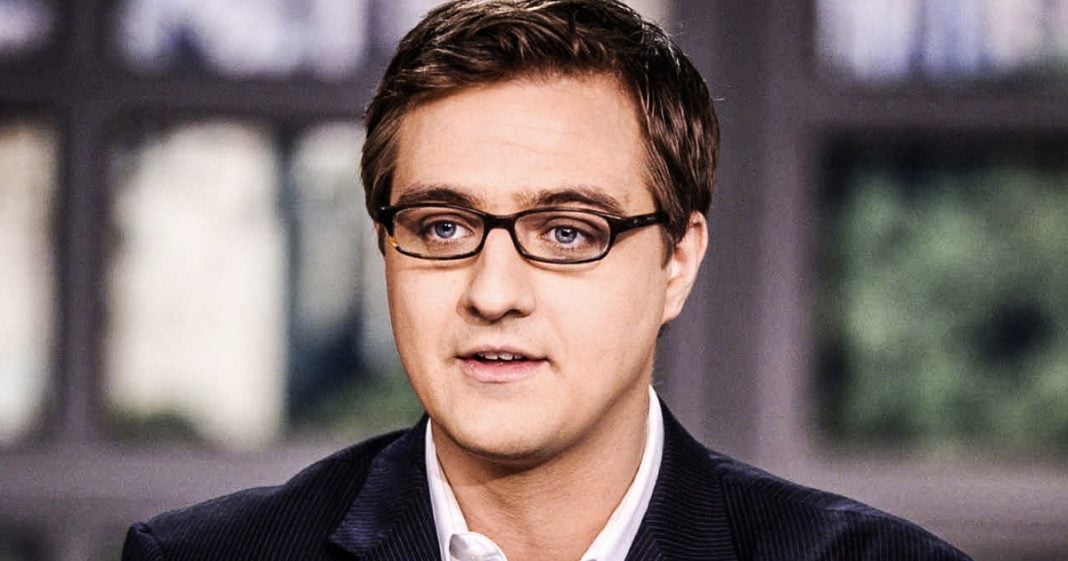 During an exchange on Twitter on Tuesday evening, MSNBC’s Chris Hayes tweeted candidly about why his network – and all of the other corporate media outlets – refuse to cover important issues like climate change. Hayes admitted that he had tried it in the past, but that these issues were “ratings killers” so he couldn’t do them anymore. This thread on Twitter by Hayes tells you everything you need to know about corporate media, as Ring of Fire’s Farron Cousins explains.

MSNBC host Chris Hayes admitted something on Tuesday night that I’m sure his corporate media masters are not going to be too happy about. Chris Hayes posted something about climate change and how devastating the effects were of climate change in Greece. He got a response from it on Twitter that said, “Sure would be nice if our news networks, the only outlets that can force change in this country, would cover it with commiserate urgency. Acting as if there’s nothing to be done is just excusable.” It’s just not excusable, excuse me. So that was the tweet that responded to Chris Hayes who was talking about climate change on Twitter, and this is what Chris Hayes responded with. “Almost without exception, every single time we’ve covered, it’s been a palpable ratings killer. So the incentives are not great.” Climate change: an issue that affects every single human being on this planet, no matter where they live, no matter how much money that have. They don’t cover it, they don’t talk about it because it’s a ratings killer. Corporate media doesn’t wanna talk about important issues, be it climate change or drug that’s gonna kill you, because those are snoozefests.

Why talk about that when Donald Trump just tweeted a tweet with a misspelled word, we gotta spend five hours talking about that. Hayes continued. That was not the only tweet where he admitted the truth. He went on to say this: “There is a vast array of stories for which this is true as well, stories for which there simply is little exgenius audience demand,” and I probably pronounced that word wrong, my apologies. But there’s little audience demand. You guys, you need to be out there demanding these stories, and I’m not gonna lie here, Chris Hayes is 100% right. Not only are these issues ratings killers, because we have seen it through our YouTube channel, we’ve seen it on other’s YouTube channels, but we still cover it. Eyeballs don’t necessarily matter. What matters is that you’re out there being honest to yourself, and reporting on the stories that actually matter to people in this country and all around the globe. Chris Hayes is not at fault here. Do not get me wrong, I am not saying that. Chris Hayes admitted the truth.

And what worries me here is that Chris Hayes is going to end up being punished for telling the truth here. How many times have you seen any member of the corporate media come out and say, “Yeah, we don’t talk about that because it doesn’t get us ratings. The people up on the top floor don’t want us to do that.” Never, except of course for Cenk Uygur after he was let go from MSNBC for wanting to talk about important issues. Same thing with Ed Schultz. I fear that Chris Hayes is about to go the same way. Because he finally admitted the truth, he wasn’t afraid to do it, and any time any reporter at MSNBC, or any of these corporate media outlets, I mean, hell, all the way back to Phil Donahue at MSNBC, any time they have the courage to go out there and admit the truth, they lose their jobs. I am confident and sad that that is probably going to happen to Chris Hayes, but his message is clear.

The corporate masters at MSNBC, as well as the other networks, they don’t let their hosts talk about issues that affect your daily life because it is a “ratings killer.” So what you can do, public, not only demand that they go out and start covering these stories, but even better than that, turn it off. Corporate media should be dead to you. They don’t care what you want to know about, they don’t care about the issues that affect everything you do throughout your daily life. So why should you care enough to give them your eyeballs, or any second of your life when they don’t care about that life, other than in terms of advertising dollars?