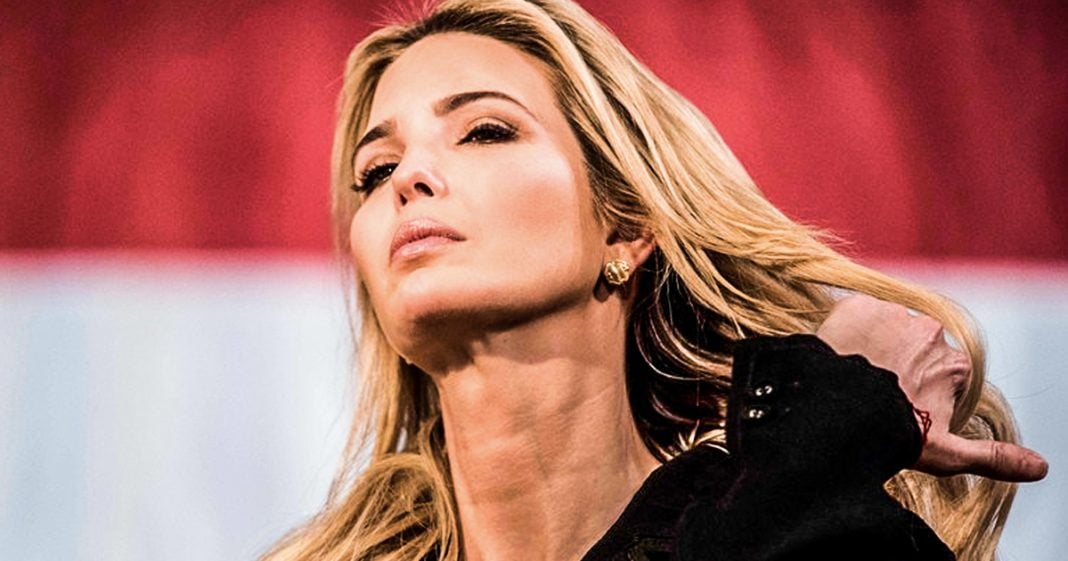 The White House is trying to get businesses across the country to sign onto their “Hire American” pledge, but there’s one business that refuses to sign the pledge – The Trump Organization. When Ivanka Trump was given the chance to say whether or not she would ask her family’s business to sign the pledge, she refused to make that call, and in fact, she refused to even say she’d ask them to do it! Ring of Fire’s Farron Cousins discusses this.

The folks serving the American public in Washington, DC, be they the President, members of the House of Representatives or the Senate, have always talked a big game on the issue of buy American or hired American. I mean, after all, it was during the Obama years that Republicans actually defeated a measure in Congress that was a buy American basically initiative. They were going to encourage companies, give them incentives to buy American goods and hire American workers. Republicans voted against that.

Well Donald Trump recently, in the White House, they came up with this hire American initiative, which was to get companies to pledge to hire American workers and create more jobs in this country. That is a great program. I don’t think there’s very many people in this country that would say that this is a bad idea. It is a very, very good idea, one of the few we’ve seen from this administration.

However, at a press conference where they were talking about this particular initiative and getting corporations to hire American, getting pledges from people like IBM, Lockheed Martin, Wal-Mart, FedEx. There was one company that actually refused to say whether or not they were even going to encourage their organization to sign onto this hire American agreement. And that organization happened to be The Trump Organization. Ivanka Trump specifically was asked if she could encourage her own company, her family’s companies, that she is a part of to sign this pledge and only hire American. And here’s what she said, “It’s a great idea, I will recuse myself from calling them but somebody in this room should do it”.

Really? You’re gonna pass the buck like that? We got a major initiative here to encourage corporations to use American labor, American goods for American people. And you don’t even have the testicular fortitude to come out and say, “Yeah, I’m gonna call them. I’m gonna say damn right you gonna assign this”. And I understand being a woman you don’t necessarily have testicular fortitude but that is just a term used to say that you don’t have the courage to do it. And that’s the problem.

All of these politicians, and I’m talking both parties here, are always willing to say the right thing, but rarely ever willing to do the right thing. Especially when it comes to corporate America. Ivanka Trump absolutely could have said, “You know what, yeah. We’re gonna stop importing all of our labor for Mar-a-Largo. We’re going to stop paying poverty wages to our employees out in Las Vegas. We’re going to do something about this because if we’re asking others to do it, we’re gonna do the same thing here”. And just like Ivanka won’t agree to do it, even these companies that have agreed to do it won’t end up doing it. Why? Because it’s gonna cost them a little bit more money. They’re not going to be able to turn as many billions of dollars in profits. In reality, we’re probably talking about a few hundred thousand dollars here and there for these multi billion dollar corporations. But even that is too much to lose by reinvesting in this country. Corporations don’t wanna do that.

At the end of the day, their goal is to make as much money as possible as fast as possible. To hell with the consequences, to hell with this country if it has to be. And this hire American pledge that they’re signing on to, again, it is a great pledge and it’s a great idea. Unfortunately, I don’t think there’s too many people in this country that have any faith or trust left in corporations to think that they’re actually going to do it.