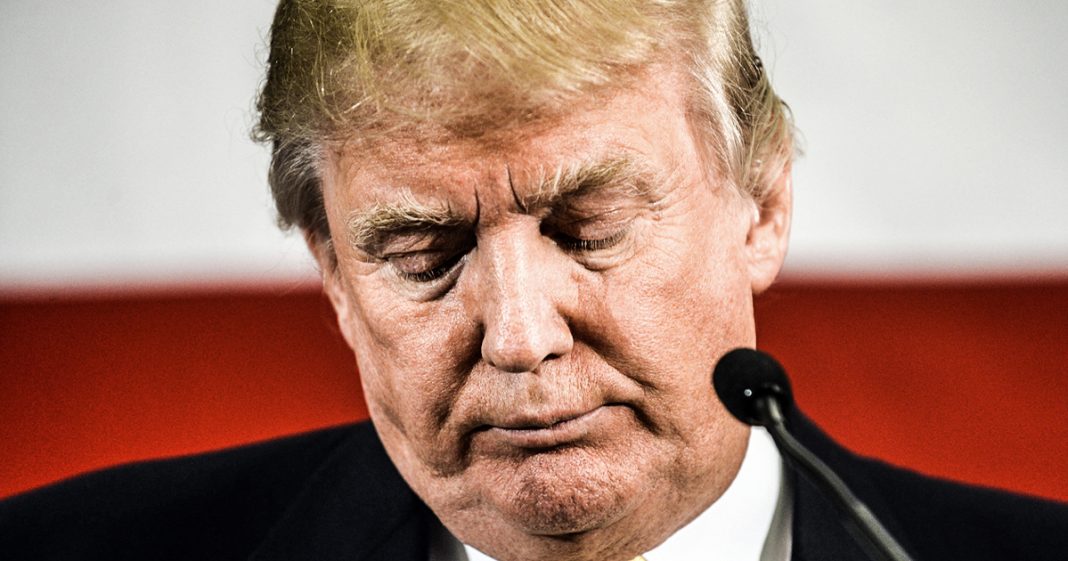 Donald Trump blasted the release of the Michael Cohen tapes where he and Trump discussed paying off a former Playboy playmate with whom Trump had an affair, saying that both the release and the recording itself could have violated the law. But what Trump didn’t mention during his Twitter tirade is that HE personally waived privilege on that piece of evidence, allowing it to become public. Was this Trump being dumb as usual, or was it intentional so that he could play the victim again? Ring of Fire’s Farron Cousins discusses this.

There’s a lot more to the Michael Cohen tapes story than Donald Trump wants Americans to know. On Saturday morning, the day after it was released that Michael Cohen had these tapes, and it was Trump and Cohen talking about the payoff to Karen McDougal for the affair she had with Donald Trump, Trump tweeted out this. “Inconceivable that the government would break into a lawyer’s office early in the morning, almost unheard of. Even more inconceivable,” this is the important part, “that a lawyer would tape a client, totally unheard of and perhaps illegal.” He goes on to say, “Good news is your favorite president did nothing wrong.” Unfortunately, he’s nobody’s favorite president.

Nonetheless, he said that it was unheard of for a lawyer to do this, and it was perhaps illegal. Well, earlier today, we already talked about the legality of it, which yeah, it’s totally, 100% legal. But to say that it’s unheard of, that is an absolute lie, not just the practice of doing it, but that you, Mr. Trump, didn’t know that these tapes existed, because here’s the thing. Your idiot lawyer, Rudy Giuliani, already confirmed that it was you, you personally, that waived the privilege protection on these particular tapes, which therefore allowed them to be given to the prosecution and revealed to the public.

Donald Trump is doing one of two things here. One, he’s either showing that he’s got full-blown dementia and doesn’t remember waiving privilege on these particular tapes, or two, he released them and agreed to waive privilege only so that he could later on when they came out play the victim and try to get a little sympathy from his base, and try to go ahead and discredit them before the public could learn what was on them. Personally, I think it’s the latter, although I do think there is a little bit of dementia in Donald Trump’s brain right now. But I think he played this exactly how he wanted to play it.

Again, Rudy Giuliani confirmed over the weekend that those tapes were originally marked privileged. The prosecution couldn’t get them. They couldn’t go to the public, nothing. The defense had them. Then Trump came along and said, “No, I don’t want privilege on these particular tapes,” which therefore allowed them to go to the prosecution and the public. It was Trump himself that did that according to Trump’s own lawyer. So no, nobody’s buying your fake outrage here except for maybe your hardcore supporters, but again, that was your plan all along, wasn’t it? You wanted people to feel sorry for you, to feel like a crime had been committed against you. You wanted to play the victim so that people would focus more on the potential illegality of it rather than the content of those tapes. That is what’s important.

Here’s what the tapes are. It has Donald Trump and Michael Cohen talking about the payoff or potential payout to Karen McDougal, a former Playboy Playmate who had an affair with Donald Trump. This happened, I think, like two months before the election. Donald Trump was on tape saying, “Oh, we should pay her by check if we pay her,” but Giuliani says, “Don’t worry. No payment ever happened.” Yeah, that’s also not true, because we learned earlier this year that Michael Cohen did make a payment to Karen McDougal. It’s just at the time we were told it was because of a payoff from Elliott Broidy. It wasn’t for Trump. No, no, no, Broidy. That big, fat idiot was the man who had an affair with this woman, not Donald Trump.

Well, this new revelation throws that entire story out the window, because if Michael Cohen made a payment to McDougal and Trump had previously talked to Cohen about making a payment to McDougal for the affair that he had with her, I don’t think Elliott Broidy is the one who slept with this woman. I don’t think that he and Donald Trump were out there sharing the same women. That just doesn’t seem right, does it? Nonetheless, the payment happened. Trump is on tape saying it happened.

Yeah, Republicans are saying, “Does it matter? It wasn’t campaign funds, and that’s what this is all about.” Oh, you poor simple fools. That’s never been what this is about. If only you people took five seconds to learn the smallest thing about campaign finance laws, it’s not that he used campaign money. It’s that any kind of payoff is seen as an in-kind contribution to the Trump campaign. Any money spent to prevent damage to a campaign or to elevate the campaign is considered an in-kind campaign contribution. The payment to McDougal of over a million dollars well exceeded the legal limit, so yeah, if Trump made the payment or Cohen made it on behalf of Trump, it’s illegal.

But Trump knew about it from day one. He knew the tape existed. He knew he talked to Cohen about it. He knew the payment had been made, and yet here he is on Twitter saying that this is unbelievable and it came as a shock to him. Would the public please feel sorry for me, because once again I’m the victim of a horrible witch hunt, that for the record seems to be catching quite a few witches?