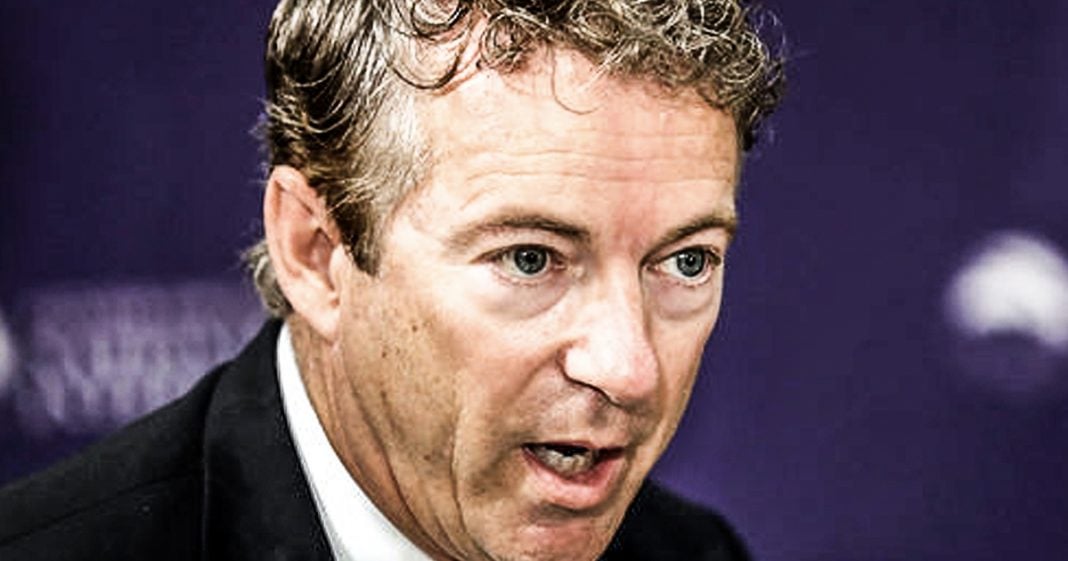 Rand Paul likes to pretend that he’s a true Libertarian – someone that will always stand up against wasteful spending. Well his campaign finance records show that Paul is just another hypocrite, and he’s been using his campaign money to fund lavish trips to Europe in luxury hotels while also parading around in limousines when time permits. Ring of Fire’s Farron Cousins talks about Rand’s phony Libertarianism.

Republican Senator Rand Paul has always been somebody who has been out there railing against what he calls wasteful government spending. Hell, even government spending that’s not wasteful, Rand Paul always seems to be against it because at heart the guy is a Libertarian. He doesn’t think the government should be spending any money on anything and that private industry can always just fix any problem that pops up in the world.

Well, apparently Rand Paul found one problem that the private industry can’t fix. And so he’s had to go out there and spend his own campaign re-election money on things like luxury vacations to Europe. Hotels in Italy. Limousines in Rome and all kinds of other things that most of people in this country will never ever get to experience. Rand Paul like so many others in Washington D.C., is an absolute hypocrite.

And yes, the new reporting from the Center for Responsive Politics lays out exactly how Rand Paul is spending that campaign money. Here’s some it. He’s using funds from his political action committee re-inventing a new direction. Paul spent $11,043 at restaurants in Italy in Malta last year. He spent $4,492 on limousine services in Rome and $1,904 on an upscale hotel in Athens. He also $1,575 at a Trump hotel restaurant. Now, do those sound like the actions of a man whose good with money or whose against wasteful spending? Because, again, this isn’t technically his money. This is money that he raised through his pack for either his own re-election or to hand out to other Republicans to help with their elections.

Instead, much like his buddy Devon Nunez who we reported on last week, he’s just spending it on himself. On these luxury vacations, which again, is against the rules. Unfortunately, nobody ever enforces these rules anymore. Citizens United has made it to where even when things like this are illegal, nobody wants to touch it because they’re going to find some kind of way to argue that no, no, no, I was over there in Italy campaigning. This was a campaign function. That’s what Devon Nunez did out in California and I guarantee you, it’s what Rand Paul would say about his vacation in Italy.

Nonetheless, this story at the very least proves what a hypocrite Rand Paul is because if he wants to talk about responsible spending, then he needs to start with himself. Once he gets his little luxury vacation problem under control, then maybe he’ll have a little-bit of credibility to argue that the government shouldn’t be wasting any money.