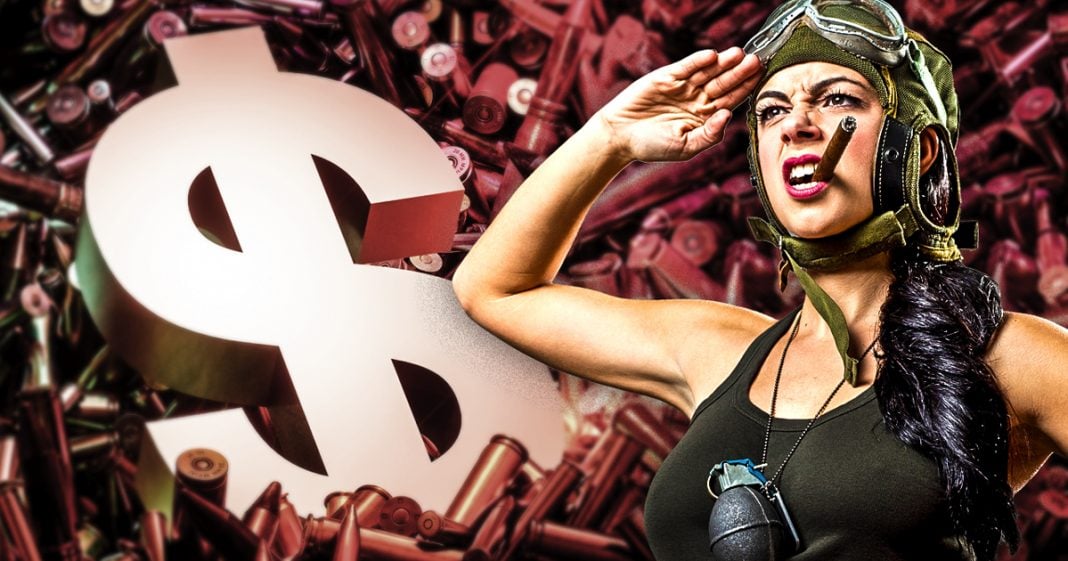 Farron Cousins takes twitter questions from the Ring of Fire audience. @HospicePlanet, asks, “If climate change is (probably) the greatest enemy of America, then what is the point of spending 60% of tax dollars on national defense against non-existent enemies? Is the military-industrial complex a behemoth out of control?” Then, a questions from Steve Levine, who asks, “Under single payer, wouldn’t insurance burdens be removed from employers? That alone should be impetuous to make it so.”

Our next question is from @HospicePlanet, who asks, “If climate change is (probably) the greatest enemy of America, then what is the point of spending 60% of tax dollars on national defense against non-existent enemies? Is the military-industrial complex a behemoth out of control?” Yes. I mean, the short answer to that is yes. The military industrial complex unfortunately is something that has been around longer than most of us in this country have been around and I don’t think there is a way to actually stop it at this point. I mean, we’re seeing military budgets increase every year regardless if there’s a democrat or a republican in the White House. That’s scary. This is a bipartisan thing. Both parties are bought and paid for at this point, with the exception of very few outliers. One, of the outliers being obviously Bernie Sanders. Now if he were president, he could probably veto any budget increase for the military, which would then immediately be overridden by the members of Congress because you can’t just have one good person surrounded by 535 pieces of crap, which is what would happen in that instance. You have to remake Congress.

It’s not just about the person in the White House, whoever he or she may be. You have to get the people out of Congress and to be honest, that’s one of the reasons I support term limits for elected members of Congress. I do. I know a lot of people on the progressive side disagree with me on that and to that, I say, why? You know, the founders of the United States were terrified of having a king, somebody or even a small group with absolute power and that’s why they made the term of a president four years. They wanted to make George Washington president for life at first until they realized how dangerous that was and it would be no different than the monarchy they were trying to get away from. But when we have these members of Congress that can serve for 30 or 40 years, you tell me how that’s not a king or queen. You tell me how that person who has absolute power in the House or Senate is not the one calling all the shots and making all the rules.

We have seen it too much in the last two years alone, what one person who’s been there for a couple decades can do. They can stall an entire legislative agenda. They can remake the Supreme Court without ever holding a hearing. We need term limits and there is nothing that anybody can say or do to convince me I am wrong because I’ve never heard a good argument against term limits. We need those. It’s time. We need fresh faces in Congress and that’s the only way to tackle the military industrial complex, people who pledge to not take corporate money, like Ocasio-Cortez. That is phenomenal what she has done. She could be one of the greatest law makers ever if she gets elected and then if she starts this fire throughout this country, if people like her, that could really change things. Now, the other half of the question you asked was actually about climate change. Yes, intelligence agencies say climate change is the greatest threat to US national security, 100% greatest threat. We’re literally doing nothing about it.

We did a little bit about it during the Obama year, but not enough to make any kind of difference at all because even with his clean power rule, he was still ramping up off shore oil drilling, pipelines throughout the United States and other environmental atrocities. We didn’t actually do anything during those years because every step forward was met with two steps backwards. But now the façade of even caring about the environment or global warming is out the window and the Trump administration is actively trying to make things worse. That is what their policies will do be that is what their donors want them to do. So again, if we don’t remake Congress, if we don’t get these old fogies out of there, who lived during a time before climate change was even a threat, then we will never see real change in this country. They have to go if we want things to get better.

Next question we have from Steve Levine, who asks, “Under single payer, wouldn’t insurance burdens be removed from employers? That alone should be impetuous to make it so.” You see, Steve, and I love your questions.

Thank you for always sending us stuff. The problem is that makes sense and if something makes sense to you and me and to everybody else, we can bet that it’s not going to make any sense at all to Congress and I hate to sound so naïve about this or cynical, I guess would be the right word. But it’s just every time somebody comes up with a really good idea that’s really easy to implement, Congress just kind of drags their feet and like, “Oh, man, I don’t think we can do that. Yeah, ugh. We gotta do all this paperwork and we don’t want to do that. So yeah.” But no, you’re absolutely right. If people could opt in to a federal insurance program, their employer, if they have employer sponsored healthcare coverage, would no longer be responsible for that. That would save corporations and businesses so much money, money that could then hopefully, although we know how corporations operate when they get more money, but it could be used to expand your business. It could be used to lower the price of your services or goods. It could be used to hire more people.

But in reality, it would probably just be used to give the guys at the top a few extra bonuses each year. But yeah, it would save corporations money. So it’s shocking that corporations aren’t getting behind this legislation or this effort, this movement for a Medicare for all style healthcare system. Typically, most employers here in the United States cover the cost of about 75% of a healthcare plan for their employee. The employee pays the remaining 25, comes out of every paycheck in equal amounts. Some of them only pay 50% so the employee has to pay 50%. But still, when you’re talking about plans that cost roughly 12 to $18,000 per year total and the employer is footing the bill for 12,000 of that or even 6,000 of that for 100 employees, you’re at $600,000 a year on the very, very low end. $600,000 a year these corporations could be saving if only they had enough good sense to tell our politicians to have enough good sense to stop opposing a single payer healthcare system.