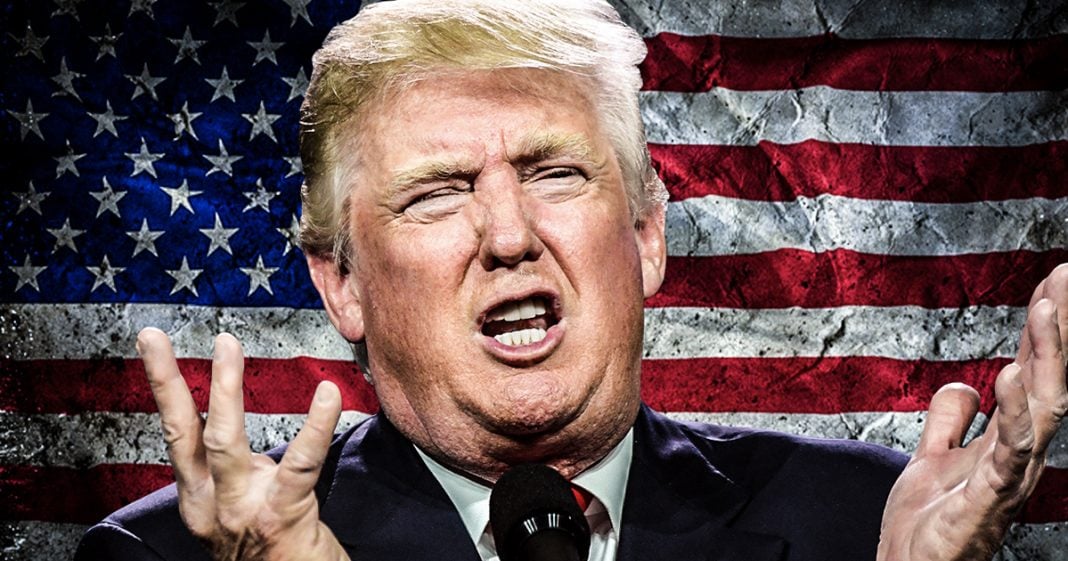 There’s no question that Donald Trump believes that Americans are stupid, the evidence supporting that theory has become overwhelming. This week alone we’ve seen several instances of Trump trying to convince us that reality is actually fake, and this has become the hallmark of his entire political career. He thinks that, because he is stupid, everyone else must be stupid, too. Ring of Fire’s Farron Cousins discusses this.

Donald Trump has a lot of problems. And I don’t just mean the investigations going on, or the treason he committed earlier this week. I mean, personally, as a human being. The guy’s got a lot of problems. The more and more I think about it, the more I realized that most of his problems as a human being stem from one simple fact, Donald Trump is a stupid person, and stupid people like Donald Trump seem to believe that everyone else is as stupid as they are.

Here’s what I mean, okay? Earlier this week, Donald Trump meets with Putin in Helsinki, where he says, “I side with you good buddy over every single person in the United States.” The next day, he back tracks on that, and suddenly some people, some Conservatives only say, “Oh, well, he just misspoke. Yeah, he was right. Okay, I’ll take his word for it.”

See, that is stupid that those people did that. But the reason Donald Trump goes out there and thinks that he can backpedal like that, when we all saw the footage is because he thinks everybody is as dumb as he is. The reason he goes out there and he tweets, witch hunt, fake news, blah, blah, blah. Things that we know aren’t true is because he believes the American public is as dumb as he is.

That’s what is at the heart of all of this. That is how con men operate. Con men cannot be successful without at least a level of ignorance on behalf of the people they are conning. And Donald Trump, a man whose conned his way through his entire life, goes around with a belief that everyone is more ignorant than he is, and that it’s only a matter of time before he’s able to take advantage of them.

Even though majority of people in this country did not vote for Donald Trump to be president, he did manage to con tens of millions of people into voting for him enough to secure the electoral college victory that he needed. But since becoming president, he’s kind of dropped the veil a bit. He’s shown just how ignorant he truly is on issues ranging from foreign policy to domestic policy, immigration policy, economics, his trade war. And at the same time that he’s destroying all of these things, he’s telling us, “No, now, they’re better than ever. Things are great. Don’t worry about the massive fire out there both figuratively and literally.” Because the state of Colorado is on fire right now, in case you didn’t know it, and some people believe him. Some people are as dumb as him or, God forbid, even dumber.

That is actually one of the reasons he’s managed to go this far in life, by treating people like they’re stupid, by repeating lies often enough that they eventually just give up and either ignore what he says or they just start believing it.

He’s conned too many people, and I think it’s time that we understand that the only way he’s able to do that is by bringing people intellectually down to his level of stupid. The only way to fight back against a person like this is intelligence, educating yourself. Going out there and reading what’s actually happening in the world.

I know that’s not something many Trump supporters are even willing to do. But if we can reach a couple every now and then, we might actually be able to take down Donald Trump without having to depend on people like Robert Mueller or the New York Attorney General or any of these investigations. We could beat him at the ballot box if people can wise up just a little bit.