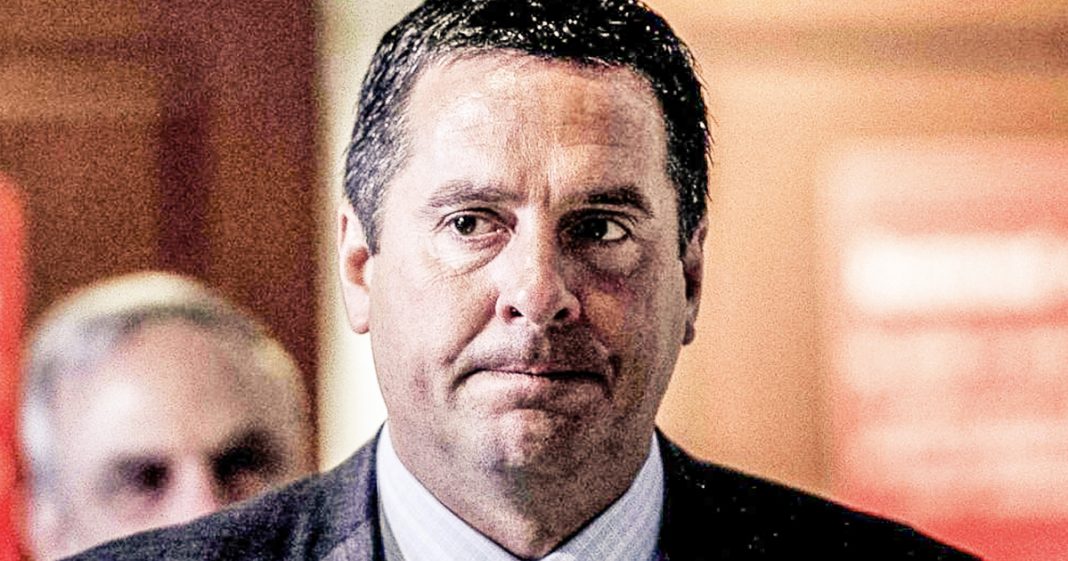 A few years ago, stories about a member of Congress using campaign funds for personal items and leisure activities would have resulted in a guaranteed one-way ticket out of DC. But not anymore. That’s why Devin Nunes isn’t sweating the fact that he spent thousands of dollars from his campaign funds on personal items – a move that is still technically illegal, but one that no one gets in trouble for anymore thanks to our backwards campaign finance laws. Ring of Fire’s Farron Cousins discusses this.

Devin Nunes, the sycophantic little water boy slash mole for Donald Trump, got busted this week using money from his campaign pack to buy personal items. Specifically, Devin Nunes was buying $15,000 worth of tickets to Boston Celtics games. He also spent some of the money on winery tours and lavish trips to Las Vegas. His pack also spent $42,000 in the last five years on catering, site rentals, hotels, and meals in Las Vegas. Ironic, considering the fact that Devin Nunes is actually a congressman from the state of California, so why he would need to spend his election money in the state of, excuse me, city of Las Vegas in the state of Nevada doesn’t make a whole hell of a lot of sense. Does it?

His pack’s expenditures included $5000 at six different wineries in California that were both outside his district, and $5000 to Gold Coast Limousine on the same day that he went to those wineries, again, that were outside his district. And I point that out so that I can continue the story here because the house ethics committee actually forbids members of congress from spending money from their reelection pack, which is where this Devin Nunes money’s coming from, on personal goods. They can use the pack to give it to other republicans. They can use the pack for their own reelection. But you can’t use it for basketball tickets and wine tours and crazy weekends in Las Vegas, which apparently is what Devin Nunes is doing.

However, that rule is often never enforced by the House Ethics Committees. Why? Because they’re all doing it and because our campaign finance laws in this country are so ass backwards that all Nunes has to write down is that it was a campaign expense, that it was for fundraising purposes, and there’s no questions asked. We have the evidence right here. The documents from his own campaign show that he did this, that he is illegally using campaign money to go out and have a little fun for himself. It’s not for fundraising. It’s not for his reelection because it’s not even happening in his own district, and nobody’s going to do a damn thing about it. That’s what’s so sickening about this.

And again, Devin Nunes isn’t alone. There was a time, in fact a time when I first started in this business, where a story like this, this would’ve been the end of Devin Nunes’ career. He would’ve been arrested. He would’ve been put in jail because 10 years ago, people were being put in jail for this, but not Nunes, not any of the other people there in Washington DC. They have manipulated and rewritten and gotten the Supreme Court to reinterpret what political fundraising money should be used for, and that is why they are able to get away with murder at this point, because there’s nobody looking over their shoulders.

There’s nobody in DC that wants to enforce these rules because most of them are probably breaking them themselves. So a jackass like Devin Nunes gets to get away with it. And he’s not going to stop. He’s already raised $7 million for his reelection this year alone, partly because he is Trump’s go to boy, feeding him information and leaking it from house committees, even when he’s not supposed to. Devin Nunes has done everything possible wrong in the last two years, and unfortunately it looks like he’ll be sailing towards and easy reelection because nobody cares anymore when members of congress break the law.