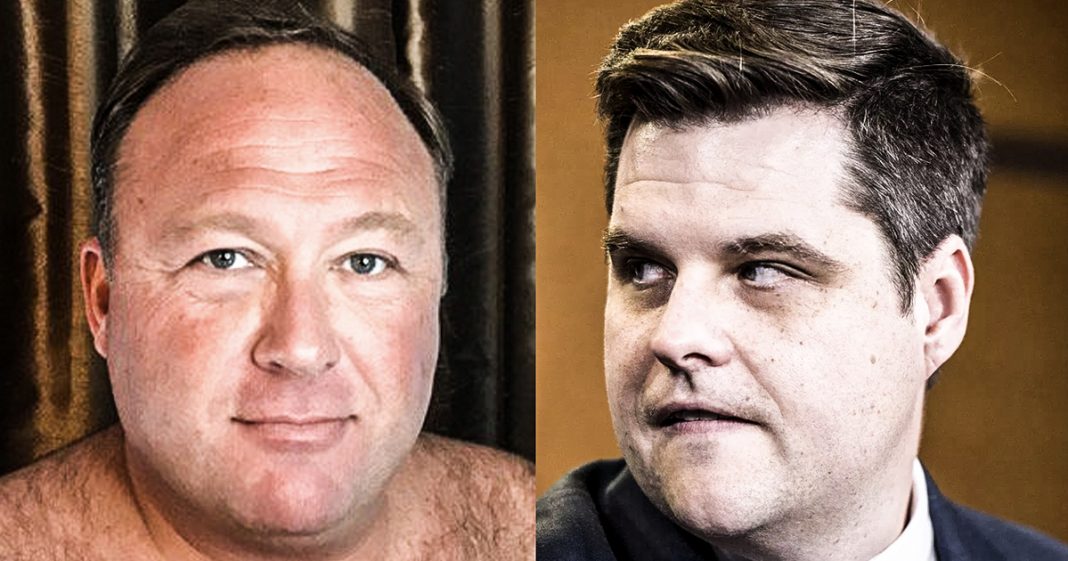 Republican Congressman and Donald Trump suck-up Matt Gaetz finally admitted that it was a mistake for him to appear on Alex Jones’ radio show. Unfortunately for Gaetz, it took him 6 months to finally come out and admit this mistake. Gaetz is facing a tough re-election campaign with a Republican primary challenger looking to unseat Gaetz, so his 6-months-later apology is likely just a ploy to convince voters that he isn’t as crazy as everyone thinks he is. Ring of Fire’s Farron Cousins discusses this.

Republican Congressman Matt Gaetz just loves the allure of video cameras, TV cameras, radio shows, anything that puts that moron’s name out there in the public, he will absolutely do it. And that’s why, back in January of this year, he decided it would be a good idea to go on Alex Jones’ radio show and he did his little interview and then this week, in an interview with The Hill for Hill TV, Matt Gaetz, my congressman, finally admitted, yeah, that was a mistake. I wish I hadn’t done that. Which, to be honest Matt, that would mean a lot if you hadn’t waited six months to come out and admit that you made a mistake.

Here’s exactly what Matt Gaetz said during that interview:

“Upon further reflection I think the things that Alex Jones has said and done are so hurtful to so many people that a member of Congress should not grace that platform and legitimize it.”

So, my question to you, Matt Gaetz, is did you not know who Alex Jones was before you went on that show? Because you had already been a conservative lawmaker for an entire year, furthermore, at least on the federal level … furthermore you’d been in Florida politics even before that. You were an outspoken person within the republican party and I know that being a republican, seeing some of the crap you share online, that you do know who these conservative talking heads are throughout the country. You have to otherwise you’re a complete moron. So you knew who Alex Jones was, you knew the things that he had said, the lies that he was spreading, the violence that he was inspiring through his conspiracy theories yet you chose to do it anyway. So why now? Why six months later are you suddenly saying, oh Alex Jones is not a good guy and I shouldn’t have done that. And nobody should do that and Alex Jones.

Here’s my best guess. As I’ve mentioned many times, unfortunately Matt Gaetz is my congressman, I live in his district and I’ve lived in this district a hell of a lot longer than he actually has and I know it a little bit better than he does too. Here’s the thing, I drive around this place every single day and yeah, there’s a few Matt Gaetz signs out there in peoples’ yards, but you know what there’s more of … Chris Dosev signs. Do you know who Chris Dosev is? You probably don’t, you probably don’t care but I’m going to tell you anyway. Chris Dosev is actually Matt Gaetz’ republican primary challenger and he seems to be picking up steam. Matt Gaetz understands that people in this area have figured out that he is just out there to make Matt Gaetz famous. And so we’ve got this other guy, Chris Dosev, that thinks he can actually push Gaetz out. He’s picking up steam, people are supporting him because they don’t like what Matt Gaetz has done since becoming congressman and there might be a seat change coming. So Matt Gaetz has to go back through the last two years and make apologies for all the stupid shit that he’s done.

But unfortunately for him it’s a little too late ’cause we got the primary right around the corner now. And that’s good. It’s bad that this area is still probably going to be represented by a conservative. This area never goes liberal no matter how hard I try. I just can’t do it. But nonetheless, getting Matt Gaetz out of congress who has been a vocal supporter of Donald Trump, has photographed with him on Air Force One, getting this guy out of Congress would be a huge step forward. What would be an even bigger step forward is for people in this area to vote for the liberal … the democrat here, Phil Ehr to take over and maybe, for once in my lifetime, have my home town, this area that I’ve lived my entire life, finally see some progress. But we can’t do that as long as we have idiots like Matt Gaetz representing us.