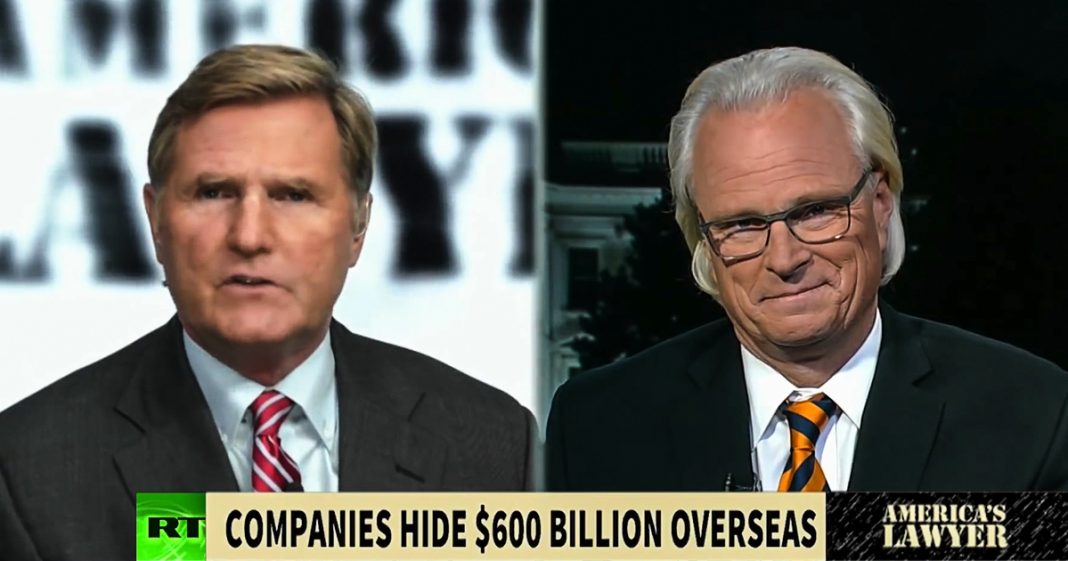 Mike Papantonio: For decades, Republican politicians have been falsely telling us that the United States has the highest corporate tax rate in the world. And it was because of this allegedly high corporate tax rates that corporations were hiding billions of dollars offshore accounts routinely, so naturally we needed to cut taxes so corporations would bring that money back home. Six months ago, the years of spreading those corporate sponsored talking points paid off and the new tax law that slashed the tax rates for a multi-billion dollar corporations went into effect. But even with their new tax breaks, corporations are still hiding hundreds of billions of dollars in offshore accounts with absolutely no intention of bringing that money back to the United States. The amount that US companies hide overseas each year is a little more than $600 billion. The reason for that is because the language of the new tax law actually gives corporations more incentives to hide money in offshore accounts because it’s taxed less than money that they make in the US.

For years, corporations have been playing a shell game in places like the Cayman Islands and Switzerland. They create corporate headquarters in these countries, which usually consist of nothing more than a post office box and they claim that this is their corporate headquarters. So even though they make all their money in the US, they ship all the prophets to phony overseas headquarters in order to further reduce the amount of taxes that they have to pay. And the worst part of all that is it’s perfectly legal because the people who write the laws are completely owned by these corporations.

Joining me to talk about this is Bart Chilton. He’s the host of Boom Bust here on RT America. Bart, start by telling us how the new tax law actually makes it more profitable for companies to keep their money offshore because that’s the new routine, isn’t it?

Bart Chilton: Absolutely, Counselor. Well, I mean, the deal is that the tax rates, as you were alluding to, dropped from 35% for US companies down to 21%. That’s the good news for companies, but when you compare where they might be taxed in an island like the Cayman, like Switzerland or like Bermuda. Bermuda is the big new one, Mike. The tax rate could be zero and so there are still provisions. And this is particularly true for the drug companies, for example, where if you place your patent in Bermuda, for example, then you don’t have to take any profits, US profits that is, so you’re not taxed upon it. So it’s still sort of a shell game. These are paper profits that are taking place all around the world but not in the US. And we really got to get tough on this stuff if we want to bring these, repatriate is the word they use, of course, bring back these profits and therefore the taxes to help ensure that we have the things that we need here as a country.

Mike Papantonio: Well, let’s back up a little bit. Okay? The same people who wrote this law were the same people who gave them the tax breaks to begin with. And you know what? Remember what they said, give these corporations tax breaks and they’re going to share it with employees. Everybody’s going to be happy because the employees are going to be happy. They’re going to make more money. And so what ended up really happening is just the opposite. The corporations, they bought back their stock, they gave their CEOs big bonus, and the third thing they did was started parking their money offshore to take it away from our infrastructure in the United States. When people like Paul Ryan were selling this tax bill, they told us that corporations would absolutely bring back the money. That never has happened, has it? Has it ever happened in history that when we give a big corporation a tax break that they share it with the employees and the trickle down takes effect because the employee then goes and buys goods in the United States. Have you ever really seen that happen?

Bart Chilton: It’s more not trickle down, Counselor. It’s more trickle on is what we’ve seen over the years. I mean, sure there are a couple of examples where some raises have been given and the Trump administration has pointed to those. But as we’ve reported on our program, Mike, I mean, there are more corporate buy backs than at anytime in history. That’s what these large corporations are using the money for. They’re giving the money back to their shareholders and sure they have a responsibility to shareholders, but that’s not the deal that we were signing off on. That’s not what Paul Ryan and Mitch McConnell and the others said. They said this is going to be reinvested, that we’re going to help fuel inject the US economy. Now the economy’s doing pretty well, but it’s not because of this increase from the tax law.

In fact, we just saw, Mike, Harley Davidson totally moving all of their motorcycle production, not just out of Kansas City, but a lot of it out of York, Pennsylvania for any bike that’s going to be sold in the European Union. Now that’s related to the trade and tariff stuff, but remember Harley Davidson was the poster child for this tax cut. You had President Trump and Mr. Pence, Vice President Pence, outside of the White House because they canceled a rally in Madison, Wisconsin because they are worried about protests. This was just after the inaugural, so they invited Harley to the White House. They brought a bunch of big hogs there and they did a photo op and they said, “This tax bill’s going to be good for US companies like Harley.” And here they are, Harley, bolting, despite the fact that they got a big tax boon and they’re in this trade trouble now. It really is a pig in a poke that I think we bought, Mike, on this stuff and we’ll have to see the ultimate dollars that we’re not getting, but right now there’s a lot of paper profits, a lot of accounting gimmicks still going on and it’s just a shame.

I remember, just as distinctly as I can, Obama, almost this tough talk, “Well, we’re not going to let you do that.” Well, he did and Bush did and Trump is going to also. So you got a corporation that’s basically paying somewhere around 5% taxes by the time it’s all over. How does this scam work beyond that? What are the intricacies of the scam beyond that?

Bart Chilton: Well, again, in the pharma sector with folks like Pfizer, a big pharmaceutical company based in the US, who hasn’t not reported a profit in a decade, Mike. What they say is, “Look, we’re domiciled in the US,” but then they go ahead and they put their patents in places like Bermuda or like the Cayman’s and so they don’t have to include profits they make on those drugs. There are some new drugs out there. There’s a drug out there right now that’s costing $60,000 for individuals to take a a year. That’s crazy sorts of money. They’re making profits on that, but they are parking the patents overseas. That’s one way.

Another way is they just say that there are spending all this R&D money here in the US, therefore they are not having profit. They’re not profitable, but the profits are coming in overseas. You’re absolutely right, Counselor, when you talk about it’s not just the Trump administration, it’s not just Bush, it’s not just Obama. A lot of these politicians, and I’ve seen them for 30 years, it’s like that old Steely Dan song, “Go back, Jack, do it again. We’ll go round and round.” They’ll figure out a way to do this. And so I’m just worried that taxpayers think that they’ve done a whole lot here when in fact, and I’m glad you’re bringing it to light, Mike, it’s not what they billed it as.

Mike Papantonio: Yeah. Well, you’re talking to somebody who has gone toe to toe, go to war, with pharmaceutical companies all around. First of all, I have no hesitation to tell you it on its face dealing with … It’s one of the most corrupt corporate entities I deal with day to day. I mean, from top to bottom. They’re always looking at a way to scam the consumer and steal from taxpayers. And so what you just described about what pharmaceutical companies do while, by the way, they’re making $60 billion a year a piece. That’s the kind of average. $100 billion is not unusual for these companies to make. They want to park money offshore and tell us that, “No, we can’t build bridges with your tax money. We can’t educate our children with your tax money. We can’t build infrastructure with your tax money. We can’t take care of American citizens,” because the pharmaceutical corporate types have worked this scam to such a science that they have no intention of bringing the money back in unless they can hold up taxpayers, you and me, literally hold us up.

We have to pay taxes at a rate, regular rate. They come in and they pay taxes 3 to 5%. And the tragedy is I’ve never seen a politician besides Bernie Sanders who was willing to stand up to that. Bart, let’s remind people of some of the promises we’ve heard over the years coming from these companies. We’re talking hundreds of billions of dollars, that would be $600 billion a year. Let’s remind some of these folks that we got a budget, Congress releasing budget with 2019, the budget calls for a $5 trillion budget cuts to things like Social Security, Medicaid, Medicare. And this is all happening while these thugs, primarily pharmaceutical thugs, are hiding all this money off shore. What’s your take on that?

Bart Chilton: A couple of things.

Mike Papantonio: Dress it up if you can.

Bart Chilton: Well, I hate to use a legal words, particularly with a lawyer and I learned from my regulatory days, don’t say something is criminal when it’s actually doesn’t meet the definition of the law. But in common parlance, it seems criminal to me, Mike. I mean, we have real needs here and I think one of the big, I think, errors in the administration is that they started not with infrastructure, not with the crumbling roads and bridges, et cetera, things that are really needed that could provide jobs. But they started with this tax cut which primarily went to the wealthy. I mean, it’s a permanent tax cut for corporations. And then the wealthiest among us get the biggest benefit also on the individual income taxes. So I just think it’s the wrong way to go. And let me just go back to your 3 to 5% real quickly.

Mike Papantonio: Bart, as we go on this year, let’s have some kind of tally. Once the number exceeds $600 billion, let’s let viewers understand that that’s money, that these corporations are stealing from them, stealing from their tax base. Thanks for joining me, Bart.