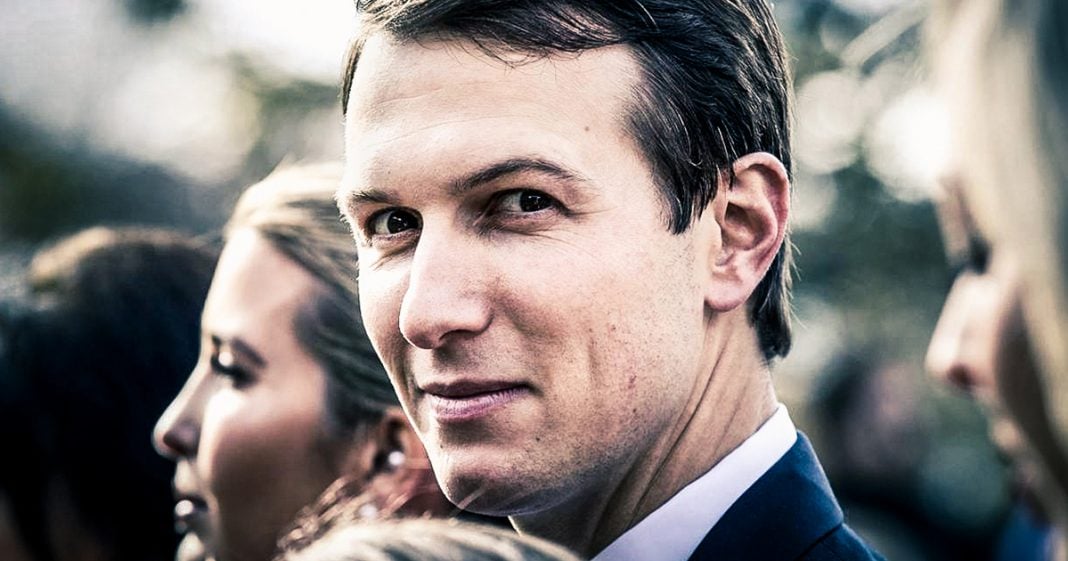 The business owned by White House adviser and Trump son-in-law Jared Kushner is now being sued by former tenants who claim they were forced out of their rent-controlled apartments so the Kushner family could build a series of high-rent luxury condos. The actions described by these tenants is very clear harassment by Kushner Companies, and this legal case should be a slam dunk for the plaintiffs, as Ring of Fire’s Farron Cousins explains.

Donald Trump’s son-in-law and current White House advisor, husband of Ivanka, Jared Kushner, found himself, this week, the target of a ten million dollar lawsuit brought by former tenants in a building that he owned. The lawsuit, specifically, is against Kushner Companies because these tenants, who were in a rent controlled apartment, say that they were, basically, harassed to the point that they had to leave so that Jared Kushner and his family could tear out their apartments and build a new set of luxury condominiums, selling well over a couple million a piece.

Jared Kushner, himself, along with a few of his business associates, is the one who bought this particular building several years ago. He bought it on behalf of Kushner Companies, but he is the man who signed his name on the documents. So yes, this does directly concern Jared Kushner.

So, here is what this lawsuit claims, according to the tenants. They said that once Kushner Companies came in and bought the building, they immediately began renovations. Nothing wrong with that, right? If they want to sell it, they need to update it. The only problem is that the renovations didn’t actually need to be done. Renovations had been completed on that building less than five years ago. Brand new stoves, appliances, countertops, tile floors, everything. Top of the line and only a few years old. Some of them had never even been used.

But, Kushner, ever the jackass that he is, wanted these rent controlled people out of his building. ‘Cause you can’t just kick them out, because that’s illegal. So, you had to find a way to make them want to leave. That’s exactly what Kushner and his companies did, according to this lawsuit.

They began demolition. They ripped out all those brand new countertops in some of the empty apartments. They ripped out those tile floors. There was hammering, and banging, and construction going on all hours of the day. It was interrupting people’s sleep cycles. More importantly, it was also releasing a toxic cloud, basically, of silica dust, which has been linked to lung cancer and other irreparable lung diseases. But, Kushner didn’t care. He wanted those people out of the building so that he could make a quick profit off of their apartments, by turning them into luxury condos.

My bet here is that this case, this lawsuit, never makes it to trial. Because, if it does, Jared Kushner, himself, is going to have to be in that courtroom for the entire thing. And, we’re going to hear all of the dirty practices that he and his company engaged in with that particular building. So, what’s going to happen is that this thing is going to settle. And, my prediction is that it’s going to settle pretty quickly so that this story disappears, so that the already embattled Jared Kushner doesn’t suffer any more negative publicity.