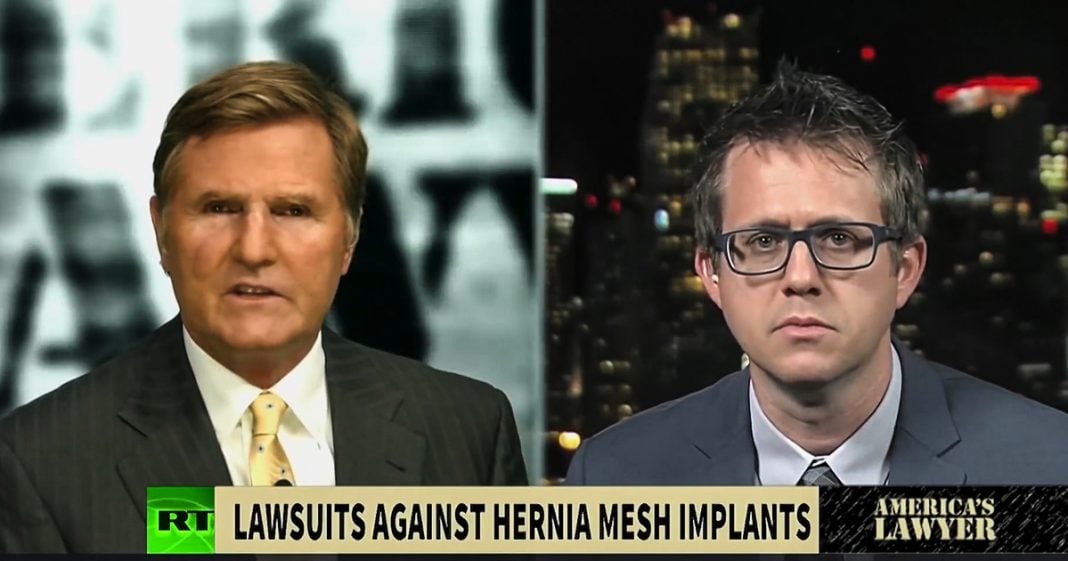 Mike Papantonio: Hernia mesh implants have become a widely popular procedure for patients suffering from any kind of hernia but with more than 54,000 lawsuits filed against the manufacturer of these implants, many now are wondering if what they were sold was really pure hype rather than a solution to their problems. Joining me to talk about this is attorney, Robert Price.

Robert, hasn’t hernia mesh been around forever? I mean, what’s going on with this?

Robert Price: Hernia mesh repair, you know, hernia, the use of mesh to repair hernias has been out there for decades, even since the 1950s. But what we’ve seen with the big manufacturers is that there’s this evolution or a de-evolution, if you will, of taking these meshes and putting them into experimental designs and experimental kits and, as you mentioned a moment ago, the idea here is that it’s a market. Get as much of this stuff out there on the market as possible. And the premise behind a lot of these kits is that they’re easy to use, they’re easy to put in and they have this special coating on them that’s going to make them easy, theoretically you can put them closer to the bowel, you can do a lot of things with them that, sort of, empowers surgeons to use them but, really, what we’re learning is that their designs are very defective.

Mike Papantonio: Well isn’t part of the problem … it used to be not everybody performed hernia surgery. You had to have some training, you had to understand what you were doing but these manufacturers, what they did is came out with this package where they tell doctors, oh, you know, this is easy to do, just mix and shake and you got a hernia mesh solution. Isn’t that kind of what happened and who are these manufacturers? Who’s responsible for this? I mean, it is really a healthcare catastrophe when you start looking at the numbers of cases where this had gone bad causing real serious injuries and even death. Who are these manufacturers?

Robert Price: It’s the same manufacturers we’ve seen in a lot of the mesh litigations. The biggest manufacturers are Johnson and Johnson, C.R. Bard, and a company called Atrium, that’s from New Hampshire. Those manufacturers are … The idea, what you started off saying is exactly correct. The idea is that there are some hernia repair clinics around the country that specialize in hernia mesh repairs and a lot of hernias out there don’t need mesh to repair them but surgeons have used mesh to … when mesh is needed but the concept of when mesh is needed has just exploded over the past decade or so as more and more surgeons are being told, hey, you can use this kit, you can use this type of mesh.

Manufacturers are saying you can take this mesh and you can place it right up against the bowel, it’s got this special coating on it, it’s got a chemical coating that’s going to help protect the bowel, which is not backed by studies. It’s not backed by adequate science so a lot of this mesh is being placed in patients that’s experimental in design and it’s the same manufacturers, many of the same manufacturers, that did the women’s pelvic mesh years ago that we’ve seen lawsuits over that. So, some of the same actors here, same meshes, same problems.

Mike Papantonio: That ended up killing a good number of women. These women were told here’s this vaginal mesh, it’s going to solve incontinence problems, no need to worry and once it was put in their body, they couldn’t get it out of their body. It had migrated to all different parts of the body. The mesh would break, it would migrate to their brain, their heart, all over their body and the manufacturers knew then … matter of fact, I took a deposition on that case and I remember that one of the descriptions of what it looked like inside the body was it looked like concrete and rebar, trying to remove it from the body was like trying to remove concrete from rebar.

So, this is really no different. What are they doing with the meshes that make the design so bad, Robert? Why is this such a big problem for people? Why should people say hell no, I’m not going to have this in my body if I have an alternative?

Robert Price: I’ll give you a couple of examples. There’s a lot of different designs out there with a lot of different problems but I’ll give you a couple of the worst designs and here’s what they are. There’s a laparoscopic technique where, essentially, if you have a ventral or a hernia in the stomach region, there’s a technique where instead of opening up through an incision, you can get a laparoscope and come through laparoscopically and some manufacturers, including Johnson and Johnson, they allow the mesh to be placed right up against the bowel on the inside of the skin, on the inside of what’s called the perineum, that layer right there, and be placed right up against the bowel. And allegedly the special coating is supposed to stop the mesh from integrating in the bowel. Well, what we found out is it actually does the reverse. The coating on the mesh actually stops the mesh from integrating into the tissue, which is what you want, and it does something called a reverse integrates and eats into the bowel. That’s one example.

Another example of this experimental coating is the Atrium Corporation, for example, coats its meshes in fish oil. Now, there’s no studies, there’s no studies out there that prove that it’s safe to coat a mesh in fish oil and put it in humans. It is unstudied design, there are a couple of studies in rats that showed it actually caused massive adhesions in rats. But literally, they’re taking fish oil from barrels, pouring it over mesh, coating it and then sticking that in a human body. You see massive infections, bowel removals, bowel recessions, some patients have to live with a colostomy bag after some of the stuff that they’ve been through.

Mike Papantonio: Too often they go in a doctor’s office, the doctor says this is how it is. The patient doesn’t do research to find out what the doctor’s just told them, it’s a huge mistake. The second problem is that we believe that the FDA actually is there to help us. The FDA has become as dysfunctional as the EPA and the FCC and every other regulatory agency in this country, maybe even worse because it’s our health that the FDA’s supposed to be looking out when it comes to things like mesh and pharmaceuticals and they have totally, totally become an extension of corporate America. They’re absolutely useless as a regulatory agency.

Thanks for joining me, Robert.