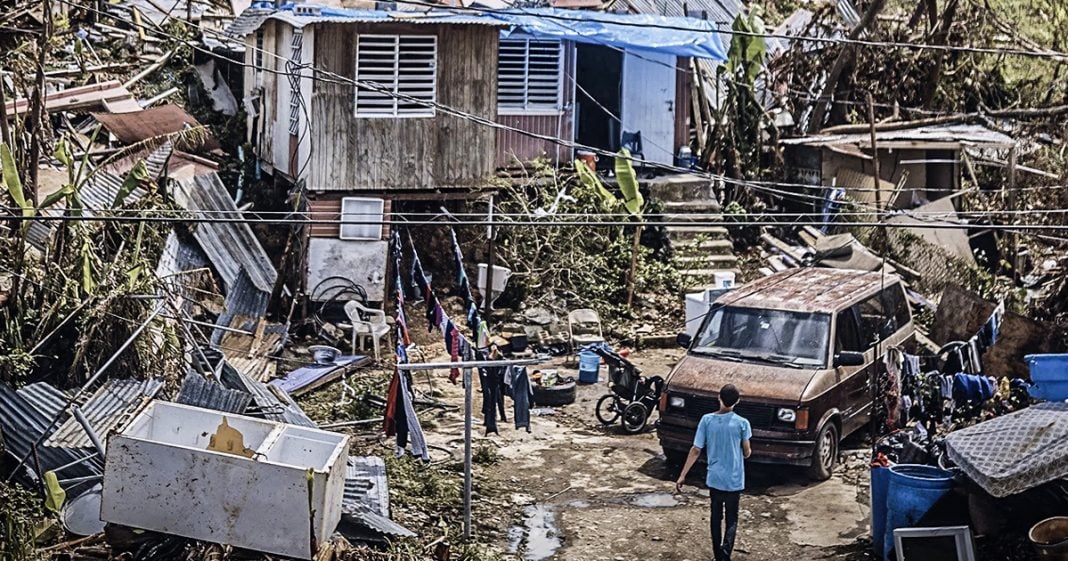 According to an internal report at FEMA, the agency actually understands that they not only screwed up the response to the devastating hurricanes that rocked Puerto Rico last year, but that they were overall unprepared for such a massive hurricane season all together. But that’s the extent of the blame that they’re taking – they also claim that their responses, considering their lack of readiness, weren’t too bad. Ring of Fire’s Farron Cousins discusses this.

In case you were wondering, the island of Puerto Rico, a United States territory has still not been put back together from the devastating hurricanes that hit it roughly one year ago. There are still several thousand people on the island who do not have electricity and again, almost haven’t had electricity for an entire year. There’s more than 60,000 people on that island whose homes still do not have roofs. They have those blue FEMA tarps that they put over that still allow some rain, all the elements and any kind of creatures out there to get inside.

That’s how bad things are in Puerto Rico. The water in many areas is still not safe to drink. Nonetheless, or I guess knowing that, FEMA finally admitted that they did a horrible job with their response to the 2017 hurricane season, specifically, how it affected the island of Puerto Rico. Of course, they didn’t admit this willingly. That actually came from an internal report at FEMA that none of us were ever supposed to see. But thanks to a group Democracy Forward, is the name of the group, they filed a Freedom of Information Act request and they got their hands on this internal report where FEMA, again only to themselves admitted, “Wow. We really screwed up. We weren’t prepared for what happened. We were,” according to them, “Roughly 5,000 staffers short of where we should have been in order to be prepared.”

They also did not coordinate with local authorities properly. They didn’t check to see if hospitals were okay or other buildings. They basically didn’t do their job and at the same time that they weren’t doing their job, by their own admission, we had members of the Trump Administration and even members of FEMA out there in the public telling us, as Puerto Rico was suffering, that they did a great job. Kind of like George W. Bush’s moment with Michael Brown after Katrina. “You’re doing a heck of a job, Brownie.” They were patting themselves on the back. Donald Trump was tossing paper towels out there like he was throwing a football to his kid.

The people were suffering. The Trump Administration wasn’t taking any blame or even admitting, “Yeah, we could have done better.” No. They said, “They did the best imaginable.” But now we found out that FEMA understands that they screwed up. The problem is, they still don’t have a plan. We’re already into the 2018 hurricane season. We’re about to hit the roughest patch of it as those of us who live on a coastline understand and they still haven’t solved any of the problems that plagued them last year. They have not increased their staffing. They’re still crazy underfunded at this point. They don’t have the resources needed. They haven’t come up with any action plans, so if and when a disaster strikes the United States or a United States territory like Puerto Rico, we’re going to be looking at the exact same situation that we were looking at last year because, as a matter of Republican Party philosophy, “Government agencies suck and we shouldn’t properly fund them so that we can just get rid of them.”