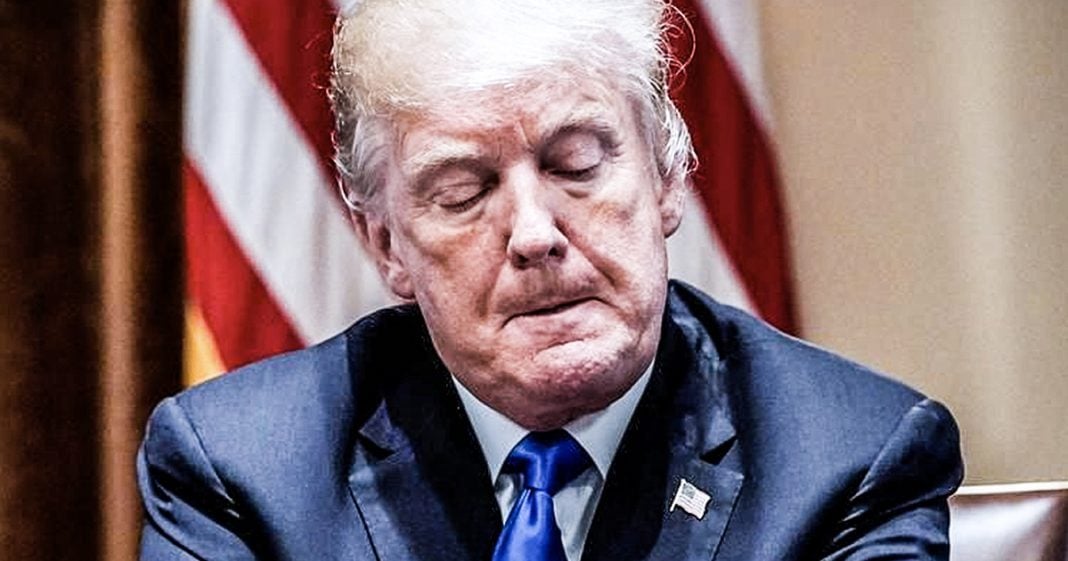 Donald Trump came into office promising to “drain the swamp.” That certainly is a catchy campaign slogan, but his actions since becoming President have done nothing to drain the swamp, and in fact, he’s actually filling it up faster than his predecessors. New analysis by Open Secrets reveals that Trump has 86 lobbyists currently on his staff, showing that not only is he not draining the swamp, but he’s also violating his own executive order. Ring of Fire’s Farron Cousins discusses this.

Donald Trump, when he was running for office, he basically had two campaign slogans. One was Make America Great Again, MAGA. The other was actually a little bit more catchy. Drain The Swamp. That was the promise he made to everybody in this country. He was gonna go into DC and drain the swamp.

Now, in case you’re not familiar with it, the alleged swamp was the cesspool that exists in Washington DC, where you have lobbyists moving into presidential administration, cabinet members becoming lobbyists, industry insiders going into agencies that regulate the industry they came from and vice versa. Everybody shuffles around. Everybody makes a ton of money and nobody acts on behalf of the American public. So Trump told us he was gonna drain the swamp.

Well, we’re a little over 18 months into his presidency so let’s take a look at how well he has actually drained the swamp. Now, we know how horrible his actual cabinet people are. You know, Scott Pruitt who recently resigned. Andrew Wheeler, Betsy DeVos, Ben Carson, horrible human beings. But, those aren’t the ones we need to talk about right now. What we need to talk about is the fact that Donald Trump currently has 86 former lobbyists working in his administration. By contrast, at the height, the most lobbyists Barack Obama ever had working for him was 65. Still, 65 is a horrible amount. It’s about 65 too high, but it’s still not quite as bad as 86. 86 former lobbyists working for the Donald Trump administration.

Here’s where some of them are. We have them, 17 former lobbyists at Health and Human Services. 11 at the EPA. Nine at the Department of Transportation and there’s seven a piece at the Energy Department, Labor Department, Commerce Department, and 16 actually inside the White House itself. Now that’s only a partial list. That’s not even everybody. Open Secrets has done a great job of putting together this analysis of Donald Trump lobbyists and you can actually go to the link in the video description here. Find the article. Go to it and click on each of the individual people, see their ties both to industry and the Trump Administration. It’s a remarkable tool. I suggest everybody use it.

But here’s the thing, Trump never had any intention of draining the swamp. And to be honest, even if he wanted to, he’s the kind of guy who wouldn’t be able to, because he knows nothing about Washington DC. He knows nothing about policy either domestic or foreign. So, he more than any other president in history would have to rely on the knowledge of others. Trump played this country so well. It is the only thing that man has ever done well in his life and the fact that he still has countless Twitter followers every day tweeting to him, “We’re so proud of you. You’re doing a great job #Drainingtheswamp.” That just shows you how brain dead and cult-like these followers are.

Donald Trump has not drained the swamp, he’s filled it up. He has filled it all the way to the point where it’s about to start overflowing. More so than any other president at least in my lifetime. Things are not going to get better. They’re not going to change. We’re not going to see decent policies, because the people running the show right now are all from industry and when industry’s in charge, average American citizens suffer.