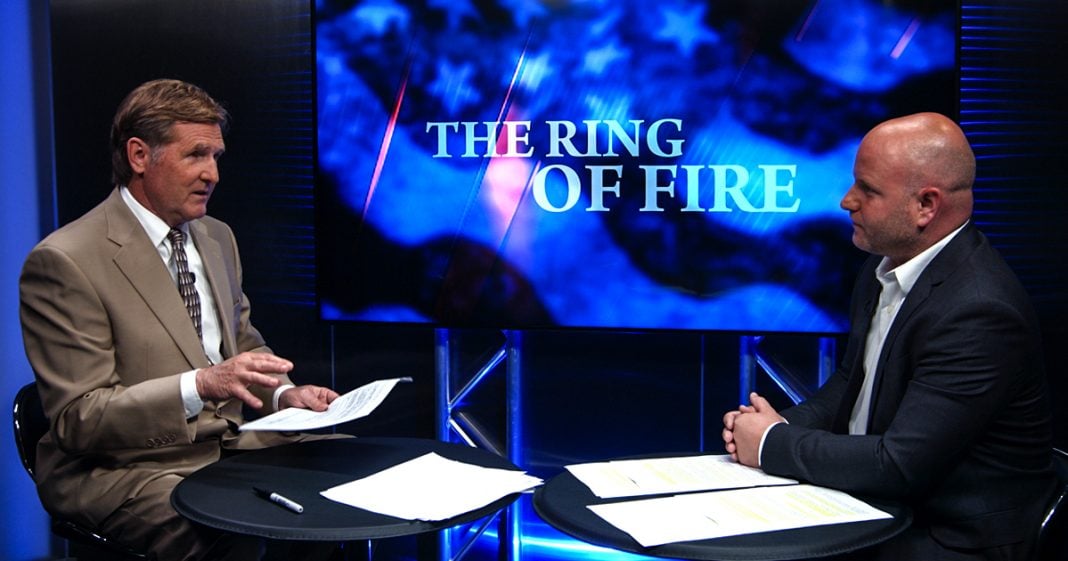 The official from the DOJ responsible for training immigration court judges said this week that migrant children – some as young as 3 years old – should be able to represent themselves in court. Ring of Fire’s Mike Papantonio and Farron Cousins discuss this.

Mike Papantonio: The official from the DOJ, responsible for training immigration court judges. I got to read this twice. But look, this is a judge said this week that migrant children, I am not making this up, do not off your television this actually happened. This judge said that migrant children, some as young as 3 years old, should be able to represent themselves in court.

Now, is that loony talk? Did I just make that up? No. It’s right here, and honest to god, I had to read about this. His name is Jake Weil, Jake W-E-I-L. Now this is a judge who is in charge of training other judges that are going to be involved with immigration cases. But he says, you know it really takes a lot of work … Wait, wait, wait, here’s what he says, “I’ve taught immigration law literally to 3 and 4 year olds.” Weil’s says, “It takes a lot of time. It takes a lot of patience, but they get it most of the time and it’s really efficient.”

Really said that. Okay. This is the guy training new immigration judges. Take it from there.

Farron Cousins: You know, I have a 3 year old. We recently just finished with the whole potty training and really nailed that. So with as difficult as potty training is, I can’t imagine trying to sit him down and say, “Hey while I’ve got you, let’s go over immigration law for the United States.” But this guy Jake Weil, apparently this miracle worker who can not only teach US immigration law to children, but to children who don’t actually speak English and this is not their culture, their law society at all.

So this guy must be the smartest human being to ever exist, but no he honestly says 3, 4 year olds they can’t represent themselves when they go to court because I can teach them.

Mike Papantonio: Well, you know what’s worse about it? He still has his job.

Mike Papantonio: Okay. He still has his job. As a matter of fact, he has been raised in his level of importance because, I almost can’t, because he is going to teach other judges how to teach 3 year olds how to represent themselves in an immigration court hearing. So, but he still has his job. And you know, at some point you got to go back.

Jake Weil here. This is the new level of stupid. He is the new mark that we all have to head towards. Jake Weil, you idiot. You still have your job. If somebody watching this program doesn’t do something to help you lose your job, I’ll be so disappointed.

Florida Governor Rick Scott has given a $600,000 tax break to a private contractor, that by the way was found guilty of fraud for about a $1,500,000 worth of fraud, but Rick Scott says, “Ah, this is exactly the kind of people I want to deal with.” Because Rick Scott, you might remember, is the guy that stole 1.7 billion dollars from Medicare and never went to prison.

The Department of Justice fined him. He stole 1.7 billion dollars, and then became Governor of Florida. And I got a prediction, he’s going to be a Senator from the state of Florida. He will beat Bill Nelson in this case.

Farron Cousins: Unfortunately, yes I agree with you 100% on that because not only did we elect this guy, our Governor here in Florida, we elected him twice knowing the full, granted he had very weak Democratic opponents who could’ve nailed him to the wall and chose not too.

Mike Papantonio: Yeah, Alex Sink. Now let’s talk about this. This was Alex Sink, a Democrat, who ran against Rick Scott. Now how did she get there? She came to my office, made a presentation to our lawyers. I almost felt like I needed to take a mirror, put it up underneath her nose, seeing if there was any condensation to see if she was alive. But how did she get there? Because the Democratic party doesn’t understand that simply paying your time, paying your money, being there long enough, that, they don’t understand that should not be the test in whether or not you’re a good candidate or not. And that is historically the Democratic problem.

So Alex stink, Alex stink I used to call her, Alex Sink gets beat by Rick Scott, who is the guy’s a felon I mean, a big felon 1.7 billion dollars in fraud that he stole from Medicare; becomes Governor twice.

Farron Cousins: And now running for Senate. But this particular story too, and we can get into the Senate thing in just a moment, but this company, where was it, Comprehensive Health Services … Oh and the healthcare industry just like he was there’s no doubt they’re good friends of his. They’re in the middle of a settlement with the Department of Justice because of all their fraud, and so Rick Scott has to wait until they reach an agreement. And then he says, “Okay, come back down to Florida. Here is $600,000 in tax breaks, and to tie it back into everything happening in the world right now, you got to reopen your little child prison for all of these immigrant children.” Because that’s what this company’s going to be doing.

So we know they’re fraudsters. They had to make this massive settlement.

Mike Papantonio: This is going on while they’re being accused of fraud. They’re negotiating the Medicare fraud, and how much did they pay 1.8, is it 1.8 million?

Mike Papantonio: 3.8 million dollars that they had to pay in the fine, and while that’s going on Rick Scott says, “Yeah, you’d be perfect. We want to put you in charge here.”

Farron Cousins: Yeah, you’re perfect given your fraud history. We think you’re going to be the greatest people possible to look after these children who we just took away from their parents.

Mike Papantonio: Let me tell you. Let me tell you what else this story tweaked to me. Okay. It tweaked the idea that this same kind of thing went on for 8 years under Obama. Okay, that’s what this did. The living conditions of some of these kids, in places like this, Comprehensive Health Services place, apparently are bad. Bad facility. But why did the media and the Democratic party ignore it then? Because, they were Democrats, so what the hell we don’t really care whether these children have to suffer. We don’t want to embarrass our party. The suffering of these kids was much worse, I don’t know if it’s much worse, it’s equivalent to what the Trump administration’s put them through. They did it for 8 years. Those pictures of kids in cages, those were actually pictures taken of the Obama administration.

Mike Papantonio: But why does it happen, Farron and you and I talk about this all the time, because Democrats, by god, won’t call out Democrats who do wrong.