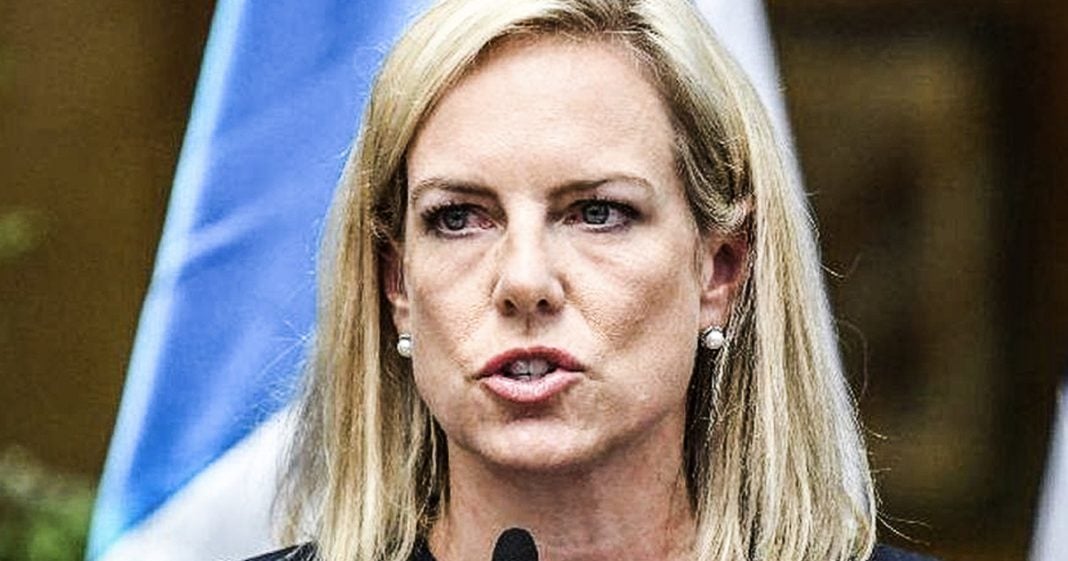 Homeland Security secretary Kirstjen Nielsen says that she hasn’t seen any evidence that Russia tried to meddle in the 2016 election, and that she doesn’t believe they’ll do anything with the upcoming midterms, either. She also admits that Russia probably tried to influence BOTH sides in 2016 in an attempt to sew discord. This woman is either very good at parroting Republican talking points or she is painfully stupid, just like Donald Trump. Ring of Fire’s Farron Cousins discusses this.

Yesterday at an Aspen security forum in Colorado, Department of Homeland Security Secretary Kirstjen Nielsen admitted that she hasn’t ever seen any evidence to suggest that Russia did anything in the 2016 election. So, take a look at what Nielsen had to say here, and then I’m going to explain why she’s absolutely either stupid, or lying.

Kirstjen Nielson: I haven’t seen any evidence that the attempts to interfere in our election infrastructure was to favor a particular political party. I think what we’ve seen on the foreign influence side is they were attempting to intervene and cause chaos on both sides, right? Whether it was in Charlottesville, where we saw them on both sides, Syria on both sides. So, no. I would not necessarily say that was the purpose. I think the overall purpose is to sew discord and get us all to fight against each other, rather than understand who the enemy is.

So here’s the thing. She already contradicts herself in that clip. “I’ve never seen any evidence to suggest that.” But, then also says in the same interview she’s giving there that, “Well, lots of people did it, and Russia was probably just trying to sew discord on both sides. The Right and the Left.” So yes, Russia did it according to her, but they did it to everybody, even though also according to her, she hasn’t heard anything about any of it. You’re either admitting that you’re lying about one of those things, or you’re so stupid that you don’t even understand what you’re talking about. Personally, I think it’s a combination of both. First and foremost, your boss, Donald J. Trump is an absolute idiot, so it doesn’t surprise us that he puts people who are dumber than him in positions of power so that he could feel like a smarter guy, and that’s obviously what he’s done with you, Secretary Nielsen.

But, the other thing is that you’re spouting what has become the new Republican talking points. It’s no longer, “Russia didn’t hack. Russia didn’t meddle.” It’s now, “Yes, Russia meddled, but Russia meddled with everybody.” And also, she mentioned this. Everybody else, every other outside country, also probably meddled, so everybody meddled, and they meddled with everybody, so let’s stop focusing on Russia. Maybe we could talk about, like Tucker Carlson wants to do, Mexico’s meddling. You know, by remaking our culture here in the United States by bringing over non-white people.

This whole thing has reached an absurd level. To be honest, it’s not just among the Republicans, who are trying to tell us that everybody meddled, and everybody was affected, so let’s move on, because they sure as hell won’t try to do it in 2018, right? Even though we already have evidence that they attempted that. But, you also had, yesterday, CNN declaring Russian meddling an act of war. So now, CNN has taken the opposition to the other extreme, and they’re trying to say that this is an act of war. You know? That we need to be gearing up troops, and ready to fight. It was only a matter of time before CNN hit that point, you know?

CNN has never encountered a war or conflict that they didn’t love, because that’s where they get their ratings. But, that also feeds the fire of some of those on the Left, who say that we’re starting a new cold war. CNN screwed up big time, and lost a lot of credibility, by coming out and saying that on Thursday. It only feeds those people who want to say that Russian meddling is not a big deal. Hillary was just a bad candidate. In reality, it’s both of those things, because believe it or not, as a rational thinking human being, it’s possible that two things happened. Not just one. Not just this one. Both of them. Bad candidate, and Russian meddling. In fact, there’s a lot of other things that also happened, that added to that. But nonetheless, Kirstjen Nielsen, Homeland Security, doesn’t want to admit that any of that was true, except also that all of it is true, because she is either as stupid as Donald Trump, or corrupt as hell, and getting her Republican talking points confused.