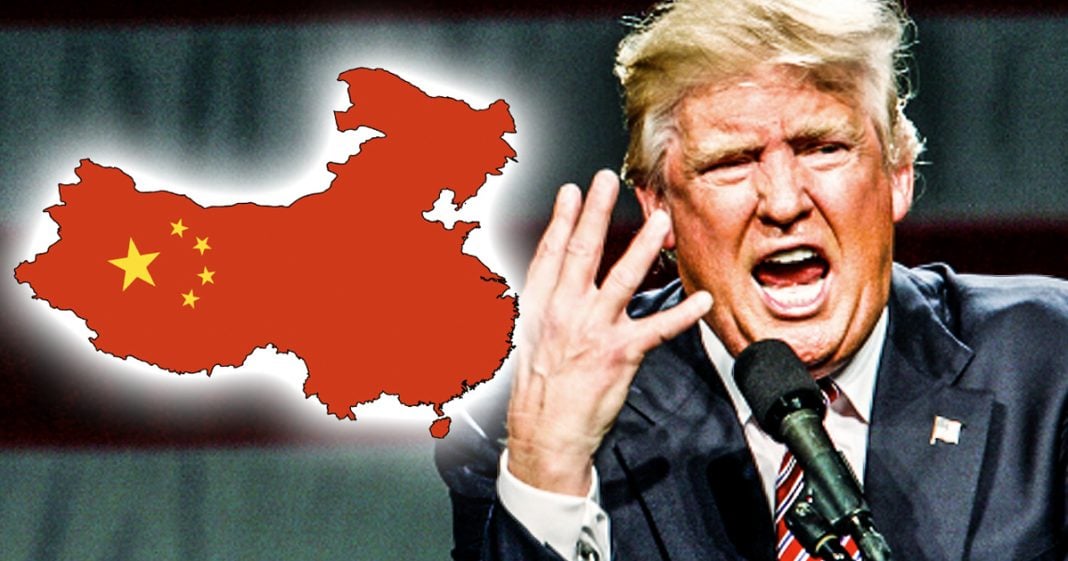 There are no winners in trade wars, which makes it an even more remarkable feat to say that Trump is somehow losing more than the countries that he’s attacking. Trump is now threatening to put a tariff on EVERY single item that comes out of China, a move that would effectively decimate the US economy. Ring of Fire’s Farron Cousins discusses this.

As I’ve said many times before, nobody wins in a trade war. There is nothing but losers. And yet somehow, even though everybody is a loser in a trade war, Donald Trump has already managed to become the biggest loser in the trade war that he started.

During an interview with CNBC this week, Donald Trump said that he is open to the idea of going nuclear on our own economy by slapping tariffs on every single good that comes out of China headed towards the United States. This would amount to roughly $505 billion worth of goods from China to the United States that Donald Trump wants to put a tariff on.

This would also, humorously enough, affect most of his daughter’s clothing line, because the majority of it is made over in China in sweat shop like conditions. It would also as we discussed earlier this week, raise the price of those MAGA hats, almost double the price of those. Donald Trump’s ties, all of his clothing goods. All of those things would also escalate in price to the point where they would be unaffordable to most people in this country.

But the bigger issue obviously is what China is going to retaliate with. Because China’s a big country that sends stuff all over the world, and yeah, not being able to sell things here in the United States, would put a dent in them. But nothing would stop them from perhaps shipping those goods to a different country, maybe, I don’t know, India. Marking them as Indian goods and then sending them over here to the United States to avoid the tariffs.

It’s pretty easy to overcome these things if you put even the most minimal of thought into it. If any kind of addition or manipulation of the product takes place in a different country, it then becomes the product of that country. So China can simply send those goods somewhere else without the tariffs, or that doesn’t have tariffs on them. They get paid in full regardless. That country can make the smallest manipulation of the product then export it to the United States, and they avoid the tariffs. Everybody wins of course except the United States, because we have a moron who wants to nuke our economy by taxing every single Chinese good.

We have already seen, and reports are coming out even this morning again, of farmers in the United States who’ve had to lay off most of their staff, who’ve had to take significant losses in income because of this trade war. Other businesses, particularly those who deal with products that are steel and aluminum, laying off people left and right. Thousands so far.

And Donald Trump has the audacity to say that he’s going to continue this trade war and escalate it to the point where every single good coming out of China has a new tariff on it? That’s not going to end well for anyone.

And I hope, I hope, hope, hope that every single voter in this country realizes that this was done by Republican President Donald Trump. And that those Republicans in Congress that you guys sent there, they’re the ones who actually blocked Democrats from passing legislation that would rein in Donald Trump’s ability to do this. Trump may be doing this all on his own, but Republicans in Congress have given him the perfect shelter to be able to do that.

And if you’re at risk of losing your job because of these tariffs. If you’ve already lost your job, or you’ve lost some of your income because of them, I hope that you remember that the Republican Party of the United States is 100% to blame for this.