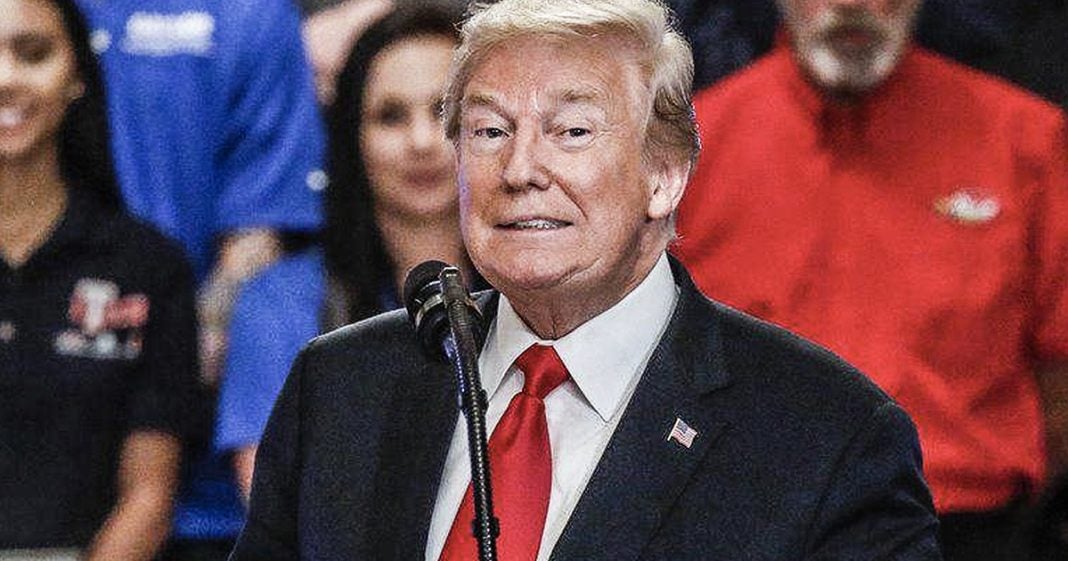 While Donald Trump was giving a speech about a new jobs program being touted by the White House, he realized that he never understood what the title of his own reality show meant. If he didn’t even know what his own show was supposed to be about, how on earth can we ever trust this man to understand what things like the US Constitution are actually saying? Ring of Fire’s Farron Cousins discusses this.

On Thursday, Donald Trump held a signing ceremony for a new job training program that the White House is touting, but during his little speech about this program, he had a moment of realization, and in that moment of realization, he let everyone in this country know that he is an absolute and complete moron.

Donald Trump: Today, 23 companies and associations are pledging to expand apprenticeships. That’s an interesting word for me to be saying, right, the apprentice. I never actually put that together until just now. That was a good experience, I will tell you that. Ain’t that strange, Ivanka, I never associate it, but here we are. Can’t get away from that word. It’s a great word.

So Trump never knew, he never knew what the title of his own reality show actually meant. He didn’t know that he was actually looking for an actual apprentice to help him with his business, and to teach them and to give them skills. He didn’t know that. Now I can go ahead and predict how all of the Trumpbots out there are gonna respond to this. “Oh, he was joking. He was joking.” No, no, no. We have seen Donald Trump joke. We know what the average human being sounds like when they’re telling a joke or trying to make a play on words. That wasn’t this. The man was genuinely shocked when he read that word, “apprentice”, on the teleprompter, and something clicked in his brain, and that’s why he immediately started going off the cuff, ’cause you could tell the difference in the way he was speaking, when he said “apprentice”, then, “Oh, hey, by the way, I didn’t even know that. Man, I did a show about this Ivanka, how about that?” The man is an absolute moron.

And it also reminds us that he is a reality show host who now happens to be the president of the United States. Now we can’t talk about this story, obviously without talking about the actual jobs, training program that Donald Trump is getting businesses to sign onto because that’s a good thing in theory. Unfortunately, these industries that Donald Trump is touting, “Oh, they’re gonna make these apprenticeships, we’re gonna try to retrain 3.8 million people here in the United States.” Yeah, that’s not the industries where we need people retrained. Where we need people retrained are the miners, the people working in the fossil fuel industry who should be retrained at the government’s expense to work in the renewable energy sector. In fact, Hillary Clinton had a phenomenal plan to do that, which was actually one of her only really great ideas when running for president. But that’s not what we’re doing.

We’re sending more people into the defense industry, which could possibly mean that we’re gearing up for another war, it could mean that we just wanna waste all that military money we just had, but none of these are jobs that are actually vital here in the United States. There are people that need to be retrained, but they’re not people that are gonna go design bombs and tanks and planes and guns. We need real American workers who are in dying industries right now to be able to move into other industries. But that’s not what Trump wants to do, but what he did manage to do during that speech was to let us all know just how stupid he truly is.