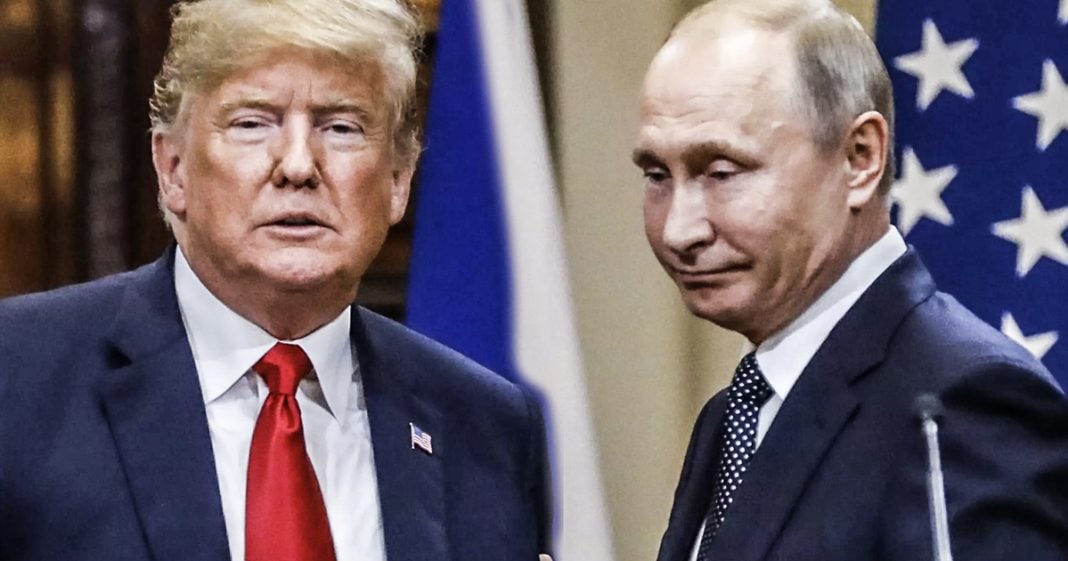 Just days after he first met Vladimir Putin in person, and following a tremendous bipartisan backlash over his behavior at that meeting, Donald Trump says that the White House is already planning to invite Putin to visit him in Washington, D.C. While there’s nothing inherently wrong with a President inviting another world leader to the White House – they’ve hosted horrible leaders in the past – this one appears to be a giant middle finger to an American public that already believes the President has been compromised by Russia. Ring of Fire’s Farron Cousins discusses this.

You know, I’ve been married for almost 10 years, so, I’ve been out of the dating game for quite some time, but I’m guessing based on Donald Trump’s behavior this week, that you’re still supposed to wait like three days before you call him back and ask for a second date, because that is exactly what Donald Trump did with Vladimir Putin. After their meeting on Monday, Donald Trump waited Tuesday, Wednesday then on Thursday announced that his White House was inviting Putin to come over for a play date sometime in the fall, you know, maybe close to around the time of the mid-term elections, who knows?

But, Donald Trump just couldn’t get enough of Putin in Helsinki, and now he says, “Come on over, come to my big White House and we’ll talk about things that we didn’t get to talk about over in Helsinki,” Now, a lot of people are angry about this and rightfully so. We’re at point in this country where we do know, I mean we have plenty of intelligence that tells us this, that Vladimir Putin was directing his Intelligence Officers to meddle with the 2016 election. We know that they’ve already attempted to meddle with the 2018 mid-term elections, and now Trump is inviting the guy who as the leader of that country, leader of those Intelligence Agencies is responsible for this to come sit on U.S. soil? Yeah, that should make people a little uneasy.

If none of that was going on, if none of that had happened there’d be no problem with this. You know the White House in the past under presidents both good, and bad has invited horrible people to the White House as their guests. We’ve seen the Saudi royal family come, and go from there more times than anyone else, and they’re about as bad as you can get, but, again, given the atmosphere in this country right now, given what Russia has done, very bad idea to bring them over here to the United States, and I’m not saying that something’s gonna happen, that Vladimir Putin is is going to do, attempt or do something, I’m actually saying that as some free advice to the Republican Party, because right now republicans are actually freaking out about what this meeting at the White House could do to them if it happens to fall before the mid-terms.

It’s gonna rehash everything from the last two years that Russia did, and it’s gonna make people less likely to vote for republicans, so, in that regard, hell yeah, I’m off for whatever, let it happen. The republicans need to face the shame of the fact that they have done absolutely nothing, and that they have blocked every single democratic attempt to get answers to what Russia did in 2016, and what they’re attempting to do in the 2018 mid-terms. Voters need to be reminded of that, and if it takes Vladimir Putin coming over here and showing his face on American TV, sitting in the White House with Donald Trump to do it, then maybe that is something that needs to happen, but either way, Trump seems oblivious to the fact that the American public is not happy about this, that his Republican Party is not happy about this, but he also understands who his handler is at this point, and that handler is not any one of his advisors. It sure as hell isn’t John Kelly his Chief of Staff, that handler is Putin himself, and that is why he is inviting him over here.

It’s almost to spite the American people. You know, he says, I quote here ” I look forward to our second meeting so that we can start implementing some of the many things discussed including stopping terrorism, security for Israel, nuclear proliferation, cyber attacks, trade, Middle East peace, North Korea and more.” Here’s the thing about Ukraine now that [inaudible 00:03:45] just mentioned, Bloomberg reported yesterday that during their private meeting in Helsinki, one of the things that [inaudible 00:03:51] leaked from that is that Vladimir Putin wants to hold a referendum vote in the Ukraine, so that people in the Ukraine can vote whether or not or [inaudible 00:04:02] I should say, can vote and whether or not they wanna go back to the Ukraine or stay with Russia.

I mean, you illegally annexed them, right? And now you’re saying, “Ah, we’ll let people vote on it.” No, yeah, that’s not how it works. What’s even more disturbing according to the Bloomberg story was the fact that Donald Trump was actually open to that idea, but he didn’t want it to leak out, because it would obviously cause some unrest, and if you wanna talk about things like stopping terrorism, nuclear proliferation, cyber attacks, trade, Middle East peace, how about you start with our allies that you’ve been alienating all over the planet. You can’t even go and talk friendly to the people who are our friends as a country, yet you wanna meet with a guy who got into our 2016 elections, meddled there, promoted you, attacked your opponent, and could very well be doing the same thing in 2018. Something about this stinks.

I think anyone who’s thinking rationally about this issue understands that. Yeah, the issue is that they wanna bring up all things that need to be addressed, but I think a good place to start with those would actually be with our allies, and not with an adversarial leader who continuously meddles in U.S. elections.