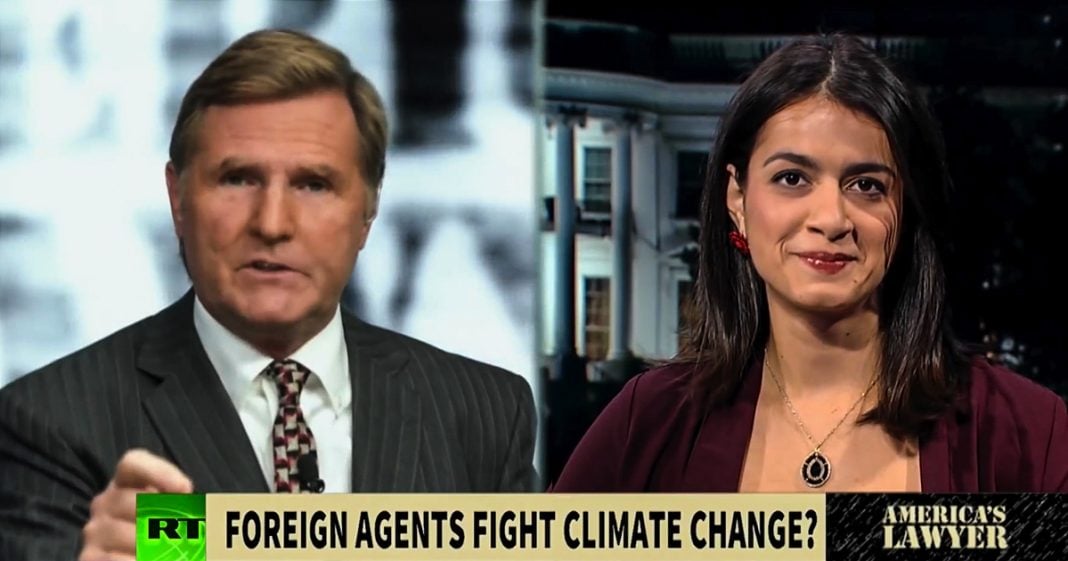 Via America’s Lawyer: Mike Papantonio and Anya Parampil talk about how the US foreign registration act is becoming weaponized to target American climate change groups.

Mike Papantonio: If you’re an American institution fighting for a cause like climate change, beware, politicians may soon be asking you to register as a foreign agent. One such group is the NRDC. Leaders of the congressional committee are labeling the US nonprofit as a potential agent of the Chinese Communist party. As a result, some journalists are beginning to ask if the country’s foreign registration act is becoming weaponized to weaken political opponents.

Joining me to talk about this is Anya Parampil. First of all, let me ask you this. Anya, of all the issues that are coming up in this story, the most obvious thing is that RT America had to register as a foreign agent, and when that was happening, people were saying to themselves, “This doesn’t look right. This is simply a news agency, why are they having to register as a foreign agent?”

Anya Parampil: Well, Mike it is a clear example of the US government using the foreign agent registration act to silence a political opponent, in this case a media organization. In researching this segment, I was reminded of the fact that in fact RT’s coverage of fracking was one of the reasons cited by the government for why we should be registered as a foreign agent. Just months before the Justice Department demanded RT register, the Office of the Director of National Intelligence, or ODNI, released part of it’s report explaining how they say Russia meddled in the 2016 presidential election.

Reading directly from that report, it says, “RT runs anti fracking programming highlighting environmental issues and the impacts on public health. This is likely reflective of the Russian government’s concern about the impact of fracking and US natural gas production on the global energy market.”

This, according to the-

Mike Papantonio: Anya, we’re starting to see a pattern is your point.

Mike Papantonio: Okay, first of all, they focus on fracking because of RT.

Mike Papantonio: Now, the next thing they focus on is the NRDC, who’s one of the biggest environmental groups in the country, has been huge in attacking fracking, has been huge on issues of climate change, and all of the sudden, you have the politicians because, we know the answer why, because the folks that are behind these politicians don’t like being criticized.

Mike Papantonio: Now we have the NRDC being called a Chinese agent for the communist party and their grounds for making these accusations are what?

Anya Parampil: It’s very interesting, Mike, because this case is being led by the House Natural Resources Committee and spearheaded by chairman, representative Rob Bishop from Utah. In making the case that NRDC should be registered as a foreign agent, he wrote a letter to the NRDC saying that it’s aiding China’s perception management with respect to pollution control, and in a letter requesting documents from NRDC, says, “The NRDC’s ability to work in China is dependent on the good will of the Chinese government. The NRDC leadership regularly meets with senior Chines and Communist party officials.”

Mike the Communist party is the ruling party in China so any organization working on policy there is going to have to work with the Communist party, just like in the United States you have to work with the Democrats or Republicans, so in that letter, Representative Bishop also complains that NRDC brags on it’s website that it sued the Trump administration multiple times, so you can see how Republicans would benefit from labeling NRDC as a foreign agent, but what’s more, Mike, viewers might not be surprised to learn that Representative Bishop is heavily backed by the oil and gas industry. In fact, according to the website Open Secrets, which tracks this information, the oil and gas industry is his second largest backer.

That might explain what’s motivating Representative Bishop to crack down on these environmental organizations.

Mike Papantonio: Yeah, you see, this is so interesting. In the sense that when RT was made to register as a foreign agent, the whole thing seemed to center around this idea of Hillary and hacking, but what was really at work was, as you pointed out, when they stated, why is it that they’re having to register as a foreign agent, they go to the same thing that we’re seeing the NRDC face, environmental, it was fracking.

Let me make a promise to you. The promise is, I know some of the folks at NRDC. Given the chance, I think there’s a trail here, and I think the we’ll find the same trail with NRDC that we found with RT, that we’re finding with other environmental organizations, that say fracking is wrong, climate change is real, and you know what, the oil industry and the energy industry is responsible for that.

This is not a coincidence, and I think it’s remarkable now that we see the same thing happening to this marvelous, I mean extraordinarily important, environmental organization, the NRDC, the same thing that happened to RT, for the same reason. RT didn’t have anything to do with Hillary or hacking or anything like that. They went after RT because of the environmental issue. I’ll make a promise to you. I will follow this trail. You heard it here tonight. I promise you I will follow this trail and if it leads where I think it leads, they’re going to have some serious problems well beyond just having some public explanations. This is one incredible lawsuit if I’m accurate about where I think it’s going.

Look, the case of WEB Dubois is being evoked, is a parallel to what’s going on right now with the NRDC. Why is that case relevant here, Anya?

Anya Parampil: Well the case of WEB Dubois really highlights the history behind the Foreign Agent Registration Act, so let’s start there. It was established in 1939 to target agents working on behalf of the Nazi government in the United States, to essentially weed out individuals lobbying on behalf of Nazi Germany in the lead up and during World War II, but the case of WEB Dubois shows how easily Farret was then politicized because while it was used during World War II to target Nazis, immediately afterwards it was then used to silence individuals in this country who were sympathetic to the country which happened to be our greatest ally in the fight against fascism, the Soviet Union.

Dubois is a black radical, most well known for his leadership of the Niagara movement, which advocated for an interracial segregation as well as his contributions to African American literature. After World War II, he led a group called the Peace and Information Center, which advocated for nuclear disarmament, and because of that political position he took, Mike, the government actually charged him in 1951 with violating the Foreign Agent Registration Act, saying that he was an undeclared agent of the Soviet government.

He was eventually acquitted, though the state department blocked him for traveling for eight more years unless he signed an affidavit denouncing communism. This is a tactic they used across the board.

Mike Papantonio: This story is deplorable. People need to understand it. Take a look at this. See Change Foundation is another group being targeted. I promise you I will leave here today and I will have our people figure out what the connections might be. Thank you Anya for joining me. Please stay on this story, because I will.

Anya Parampil: Thanks so much, Mike.