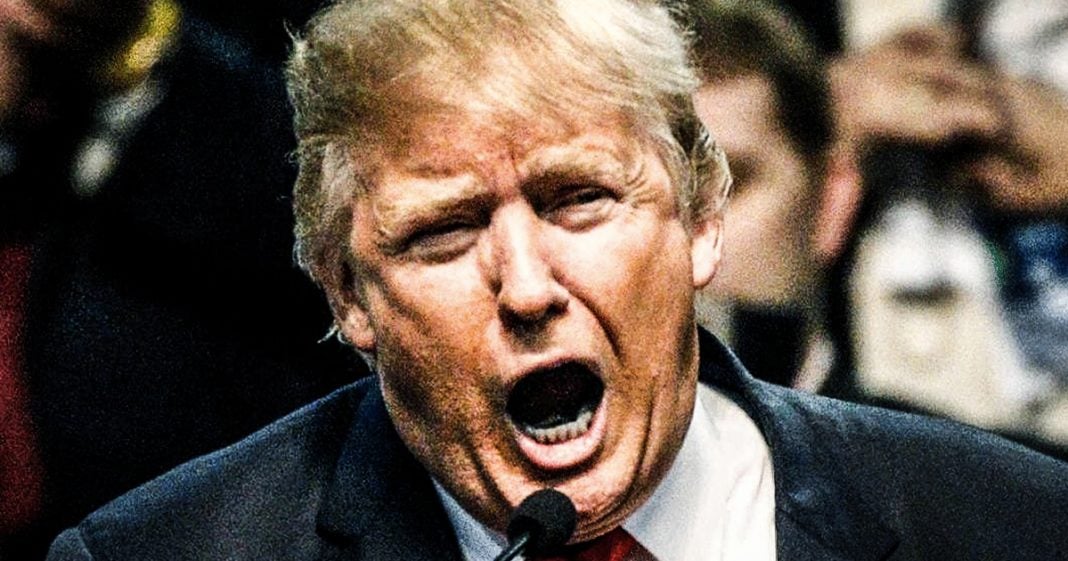 In an early morning Tweet, Donald Trump admitted that when he complains about the media it actually gives them more ammo against him, but that he’ll never stop complaining. This is what happens when you put a textbook narcissist with delusions of grandeur in the White House, as Ring of Fire’s Farron Cousins explains.

Donald Trump is freaking out right now, not only over the fact that he committed some treason on Monday with Vladimir Putin during that press conference, but also about the fact that, that Russian spy agent who was infiltrating all these powerful organizations and the Republican party was arrested, then it was revealed that she was also offering them sex, not to mention the indictments of the 12 GRU officers. So Donald Trump’s a little uneasy right now.

So he’s doing what he’s done best and he’s getting on Twitter and he’s attacking the fake news. Well, when we say fake news, when Donald Trump says fake news, he really means any news that’s not flattering to him. Here is what Donald Trump Tweeted out early this morning, “The fake news media’s going crazy. They make up stories without any backup sources or proof, many of the stories written about me and the good people surrounding me are total fiction. Problem is, when you complain, you just give them more publicity, but I’ll complain anyway.”

So right there Donald Trump admits that yeah, it’s a bad thing that I complain about them, but then he also says, I’m never going to stop whining about it. Ladies and gentlemen this is what you get when you elect a narcissist with delusions of grandeur to be the President of the United States. There have been very few articles that have come out since Donald Trump was the President that were just out right false and the ones that have been false are the ones talking about all the good things that he’s done.

You know, the ones from Bright [Bard 00:01:40] and Daily Caller and Daily Wire and Daily Moron, whatever they’re called, and Fox News of course. CNN, even the New York Times and Washington Post and MSNBC they’ve largely gotten it correct, a hell of a lot more than anyone else, but Donald Trump can’t handle that. He can’t handle the fact that even his own conservatives are starting to turn against him at least in words, not in actions, because of how horrible he truly is and due to the fact that this man obviously does not care about the United States.

Anything written about Trump or said about Trump even if true, if it’s negative, it’s fake news to him and he is never, by his own admission going to stop complaining about it. Could you imagine, I mean I hate to do the what about-isms but seriously, if Barack Obama had been this petty and spiteful during his Presidency, getting on Twitter talking about, oh the fake news is saying I wasn’t born in America again, witch hunt, I mean he had every right to do that, but he didn’t because he’s an adult that knows how to keep his emotions in check, unlike the elderly man currently sitting in the White House.

I mean seriously, Donald Trump is in his early 70’s and he has nothing better to do with his time as President of the United States than to get on social media with a bunch of bots and talk about the fake news? I would have to think that there is probably a least one thing more pressing for the President to be doing, anything. Maybe go check on the folks in Puerto Rico and up FEMA’s budget so that they could actually help down there. I don’t know, that’s just one thing. Maybe check on Flint Michigan, get them some clean water, maybe work on not being such a jackass every time you get in front of a camera.

Those are three right off the top of my head, but no. You spend your time whining and moaning like a 15 year old child about how the news media’s so mean to you and bullying you and life’s not fair and you can go lock yourself in the oval office and play some simple plan, right, because that’s essentially how you’re acting right now. This little temper tantrum that you throw on a daily basis about the fake news, I hope every Republican that sees this understands that you elected a child to be the President of the United States and all of this horrible behavior, all of the things that everybody makes fun of him for doing, that is on you at the end of the day.