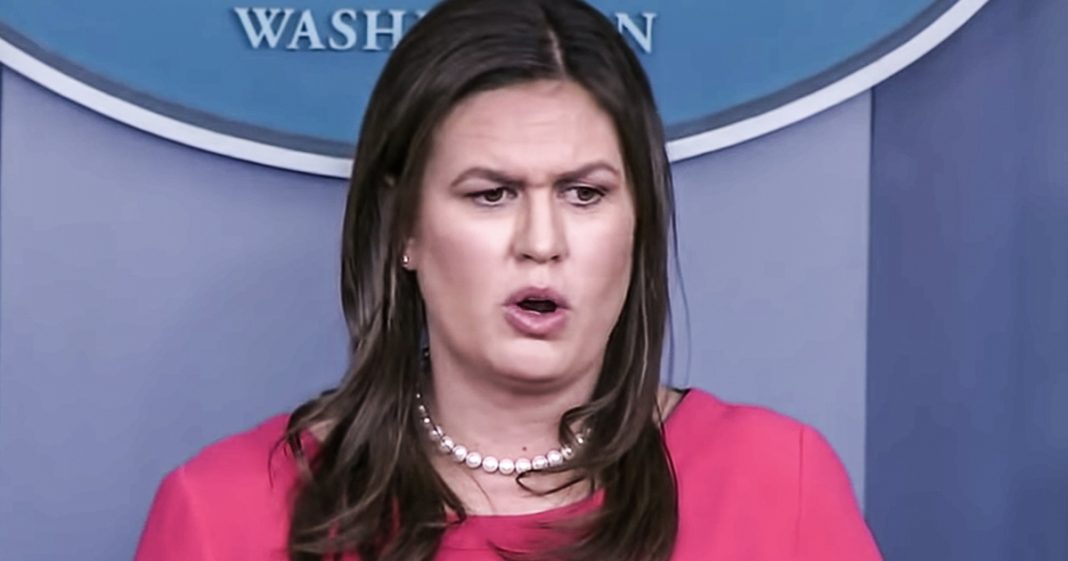 Sarah Huckabee Sanders is starting to faulter a bit, and her latest round of lies about the President’s lies were among her least convincing to date. She stammers and stutters throughout her entire defense of the President saying that Russia is no longer trying to interfere with our elections, and at one point became defensive because she couldn’t figure out what to say. Ring of Fire’s Farron Cousins discusses this.

Speaker 1:
Sarah Huckabee Sanders is in the unenviable position of having to defend all of the horrible stuff that Donald Trump has done just in the last three days. On Wednesday of this week, Donald Trump met with reporters in a pool spray where he was asked point blank, “Is Russia meddling in US elections?” Donald Trump said, “Thank you very much. No.” Sarah Huckabee Sanders was asked about that exchange during Wednesday’s press briefing. This is how she actually responded to that question to Donald Trump lying about Russian meddling. Here it is.

Reporter:
Earlier, Cecilia asked the president, “Is Russia still targeting the US?” He said, “No.” Is that what the president actually believes? Did he understand the question? Is his position that, no, Russia is not doing anything to interfere or meddle in the 2018 election?

Sarah Huckabee Sanders:
Yeah, I had a chance to speak with the president after his comments and the president said thank you very much and was saying no to answering questions. The President and his administration are working very hard to make sure that Russia is unable to meddle in our elections, as they have done in the past and as we have stated.

Reporter:
So, he does believe it’s going on?

Sarah Huckabee Sanders:
Since there’s currently not an election today not specifically, but we certainly believe that we are taking steps to make sure they can’t do it again. Unlike previous administrations, this president is actually taking bold action and reform to make sure it doesn’t happen again. But, he does believe that they would target certainly US elections again.

Reporter:
So, to just-

Okay, several points to make about Sarah Huckabee Sanders’ response there. First and foremost, the fact that she couldn’t continue a sentence without stuttering and stammering and trying to get her way through that is the hallmark of someone who is not telling the truth. They’re pausing themselves by using the “Uh” in order to find better words or to regain, or regroup their thoughts. She doesn’t know what she’s saying. She doesn’t know how to defend it. So she’s subconsciously trying to buy herself more time, so that she can properly craft a lie to explain the President’s lie. Unfortunately, the best she could come up with was, “He was just saying No, no, no. I’m not taking questions anymore.” No was no, that I’m not answering your question, no. Not, no they’re not meddling.

Well, here’s the problem with that, Huckabee Sanders. We actually can see the video of Trump, which if you wanna take a look at that, it’s in the link in the video description here. Where after Trump is asked that, somebody else asks a question that he answers. He continues answering questions. He wasn’t trying to end the Q and A, he was the one trying to extend it by continuing to answer questions. You’re absolutely lying and there’s video evidence to prove it.

Third, you said that, “Russia’s not meddling. Hell, we don’t even have an election today, you idiots.” I know you didn’t say you idiots, but I know you wanted to. You got so defensive because you were flailing so badly. But, then you also admitted, again, so that they don’t do it like they’ve done in the past. So, you say they didn’t do it. They’re not doing it. But, you’re working to make sure they don’t do it ever again. None of that makes any sense. In case you’re not clear about that. She contradicted herself at least twice in her own sentence.

This woman has to go. I mean, not just because she’s horrible and lying to the American people every day. But, because her lies are getting so weak and pathetic. If you’re gonna lie to us, at least go out there and act like you mean it. I mean, you barely even tried on Wednesday, right? You know, you used to come out there with a little bit of energy, a little bit of piss and vinegar in you. Giving people what for, you know, being a real jackass to everybody and lying with impunity. Just saying, “Yeah, that didn’t happen. Next question.” You looked defeated on Wednesday. I can only imagine that lying that much to the American public probably does take a lot out of you. But, you’ve got no energy left. So do yourself, but more importantly do this country a massive favor, and just go ahead and resign. Because, we all know that you want to.