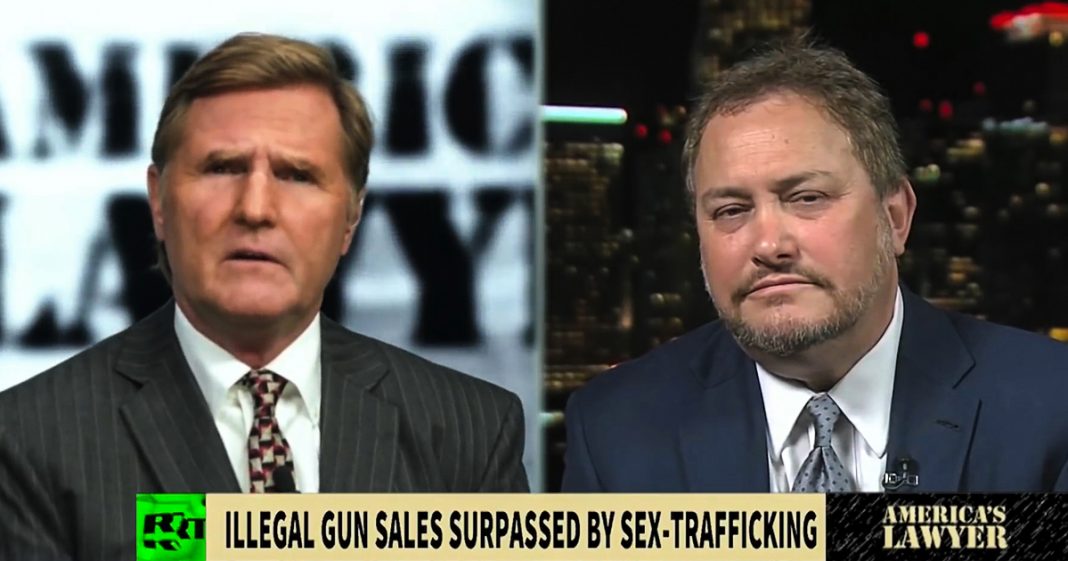 Via America’s Lawyer: Mike Papantonio and attorney Dan Soloway talk about the motels and hotels aiding the sex-trafficking business.

Mike Papantonio: In the US, cases of human trafficking have increased in all 50 states. Similar trends happening all around the globe, and while there are certain groups that are more at risk than others, the sad reality is that it can happen to anyone at any time. Reports show that illegal human trafficking has now surpassed the illegal sale or transport and firearms across the globe.

That’s turned into a 32 billion a year business. But here’s the thing most people miss about these stories. Such a booming industry with millions of humans being trafficked can’t exist without the help of hotels, airlines, and even restaurants that have been complicit in the illegal trafficking of human beings. Their silence, and sometimes even their physical aid, has destroyed countless lives.

That’s where the litigation comes in. Right now, lawsuits are developing against the industries that are providing aid and shelter to human traffickers, as well as some of the online communities where these traffickers solicit victims and customers. These lawsuits may be our last best hope to help protect innocent lives from falling into the hands of human traffickers.

Joining me to talk about this growing problem and the possible solutions is attorney Dan Soloway. Dan, start by telling exactly how bad the problem of human trafficking as gotten in the United States. What’s your take on that?

Dan Soloway: Sure, Mike. It’s bad, and it’s getting worse. You mentioned it’s a 32 billion dollar industry, which is now about 20% to 25% of the worldwide 150 billion industry that is human trafficking. It involves children, women, young girls. The victims are involved in not just slave labor, but child sex groups. The trafficking itself is becoming such a big problem, we’re talking about 1.5 million victims in the United States alone. It’s bad, it’s getting worse.

Mike Papantonio: Dan, what groups are most at risk? We don’t have very clear understanding of that. We almost think that, “Well, this only happens to people that just aren’t careful.” Those kinds of crazy rationales are so bizarre, because it really does cross all boundaries, doesn’t it?

As you’ve observed this develop, what is your take on that?

Dan Soloway: The most upsetting thing is that children make up 25% of the sex trafficking victims. 75% of all victims are women and girls. We’re talking about runaways. Runaways make up one out of every six of the victims. If you look at these younger people, so many are killed as a result of this. They die of not just malnutrition and abuse such as murder, but also suicide, also difficulty obviously living the life of a sex victim, with overdosing of drugs and things of that nature.

So I would say the children is the upsetting large group, and women and girls. They’re the most at risk, I think, at this point.

Mike Papantonio: You know, one thing we miss, first of all, we miss the fact that some of the reports are astounding. Some of the reports are the woman shows up. She thinks she’s trying out to be a model. They take her through these process. You’ve gotta come here once, you’ve gotta come twice. Then all of a sudden, they say, “Well, you know what? You got the job. But we need you to go to France,” maybe some place out of Ukraine to France, from France to the United States, “we need you to go to these places to help us build your business.” So this modeling agency then becomes a vehicle for just passing on this human trafficking.

The other thing that we’re hearing more and more about is the hotels in the big cities, especially in casino areas. At the top of the hotel, somewhere in the hotel, that some of these women are kept there. Obviously, this information is out there, but there seems to be so little that’s being done about it. So it’s my hope, and I know it’s the hope of you and so many attorneys throughout this country, that we can do something to at least make this less attractive to the people who are making 32 billion dollars a year.

What role do business play in trafficking? Hotels, airlines, restaurants, how are they involved? Where do you see this type of thing?

Dan Soloway: Well, the hotels obviously they are the premises on which the sex trafficking occurs. Hotels and motels, we need to sue them. Airlines transport the victims, from the third world perhaps, or European countries, over to the United States. So foreign nationals are engaged in the practice here in the United States. Restaurants, obviously they have slave labor there, but a great deal of the planning goes on there.

These are places that are subject to federal and state law. You can go after the predator, but you can also go after anyone that is benefiting financially from the sex trade, from the human trafficking. So that makes everybody involved in, for instance, the premises subject to lawsuits under state and federal law.

Websites, we have to go after these websites.

Mike Papantonio: Not only that … Dan, one second. Dan, one thing I find really interesting is that you not only go after the people who own that building, you go after the building. In other words, if they transport from Albania to New York, they’re held in a skyscraper in New York, somebody knows what’s happening going on in that skyscraper. All of a sudden, that skyscraper becomes a piece of property that you can attach, you can actually say, “We’re going to sell it. This was used for the course of this, and we want the victims to be paid from the money that comes from that sale.”

This is a system that these folks don’t understand, simply saying, “Well, Joe got caught, but there’s 25 behind Joe that’ll take his place.” The people at the top understand when they forfeit their property. The Rico statute on this actually carves out special handling for this type of trafficking.

you mentioned online. One part that comes into this a lot is you see some of these online services that are being sued because they really are the vehicle for people to make all of this happen. Explain that if you would.

Dan Soloway: Well, obviously, we have certain online predators. They use social media, Facebook, Instagram, Twitter. They hide in plain sight, almost. They use what I call verbal kidnapping. They offer young girls who, perhaps, are on Facebook jobs or money to send home to their family, or opportunities in school. So verbally they are promising those things that people want, even lost love or found love. Pursuing these type of ads on social media sites brings these young people in.

As you mentioned, it’s a bait and switch. They go after perhaps a modeling career, when in truth they are, in effect, made into sex slaves, and they’re kidnapped. They’re used for nefarious purposes, not just in the United States, but all over the world. They’re hiding in plain sight. We need to go after them.

Mike Papantonio: Yeah, tell us about some of the lawsuits that are developing against these industries, either they’re working with or maybe even turning a blind eye to the human trafficking. It’s not acceptable to say, “We didn’t know.” The question is, “Should you have known?” The question is, “Did you have enough constructive information that should’ve told you that this building that you own was being used?” You can’t simply say, “Well, I don’t know, I didn’t have any way of knowing.” The law really doesn’t allow for that. Intent can be read into, your actions of even ignoring the obvious.

So what do we see happening with some of these lawsuits, Dan?

Dan Soloway: Well, we’ve got federal anti-trafficking lawsuits that are available. They’ve relaxed the statute of limitations so that minors can bring claims as late as age 23. We’ve got state law claims, where as you mentioned, you might sue the perpetrator for such things as battery or assault, but you can sue the hotels, the people that put these people up, because they were negligent or careless in allowing this type of sex trafficking to occur.

We have a civil RICO, we’ve criminal RICO. We’ve got companies like Backpage that was put out of business by the federal government, and criminal RICO lawsuits brought against the CEO, who’s now doing time in prison for conspiracy and laundering drug money. They’re finding some of these websites are actually engaged in helping these predators. They say, “Take out words like ‘teen’, or ‘Lolita’.” They call it scrubbing, where they verbiage a little less likely to cause law enforcement to grab onto them as the predator.

But these are the type of lawsuits that are being brought. State and federal remedies going after companies, whether they have insurance or not. Like you say, the building itself is valuable enough that you can attach it to pay for the damages that a jury might award in a lawsuit against these places.

Mike Papantonio: Dan, you’re kind of a specialist when it comes to federal RICO kind of actions. Lawyers representing some of the victims, for example of Harvey Weinstein, have filed RICO cases against the production houses, movie studios, and even law firms that help cover up this predatory behavior. We should start seeing that same type of development with RICO actions in these human trafficking cases, don’t you think?

Dan Soloway: You know, I think we should. If you look at the hotels, for instance, what they’re doing is they’re already establishing a defense for juries. They are training their staff to look out for these sexual predators. For instance, they say, “Watch out if they pay for cash. Watch out if the door is an exit door inside a hotel room.” But what they’re doing is using this as plan, so that they can tell jurors that we had planned for this, we did the best we could, when in fact we’re finding actual hotel people and motel people are engaged in getting money from, they’re benefiting from these sexual predators.

So we have to bring claims against it when it is organized, but also when we see anybody, even on an individual basis, benefit financially from what the sexual predators are doing, especially to these child victims. Civil RICO, as well as other state and federal remedies all need to be brought. This is a way to put them out of business, and lawyers are going to have to do it.

Mike Papantonio: Dan Soloway, thank you for joining me. You happen to live on one of the corridors that comes right … I-10 corridor through the Southern United States is one of the biggest areas for human trafficking, so I can’t imagine that you’re going to have any shortages of opportunities to do the right thing, and bring these people into court and make them pay for what’s happened, and maybe slow it down just a little bit if possible. Thanks for joining me.