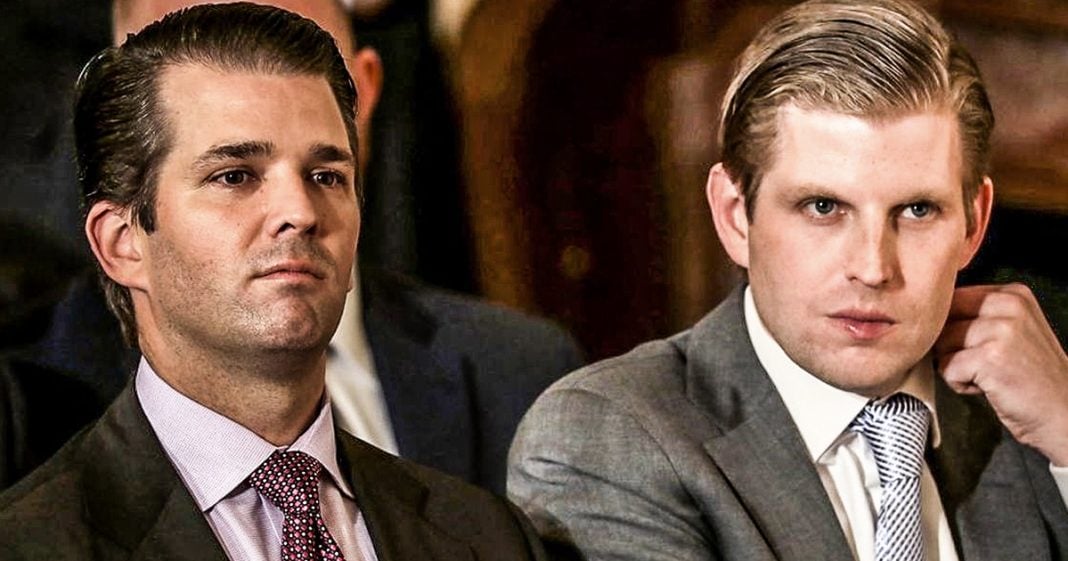 The Trump boys love to travel, and now that their father is President, that means that they get the luxury of traveling with full Secret Service protection. And taxpayers are covering those costs. According to recently-released documents by CREW, Eric and Donald Junior are racking up huge tabs for Secret Service protection, including more than $250,000 in a single month – most of which was spent at Trump properties. Ring of Fire’s Farron Cousins discusses this.

Eric Trump and Donald Trump Jr. sure know how to party, right? I mean, these guys are millionaires, maybe even billionaires. Who knows their actual net worth, because we’ll never really get our hands on any of the Trump family tax returns, but these guys are living the high life, and unfortunately they’re living the high life on taxpayer expense. According to recently released documents by Citizens for Responsibility and Ethics in Washington that they obtained via a Freedom of Information Act request, the Trump boys have been spending hundreds of thousands of dollars on Secret Service protection, money that is coming from the taxpayers, and it’s actually being spent at Trump-owned properties.

This obviously is something that should piss off every American citizen, right? I mean, we shouldn’t have these Trump boys using the US Secret Service to globetrot around the planet, opening up new properties, checking on other properties, making those same Secret Service agents spend tax dollars at Trump properties so that those two morons get that money back at the end of the day. That’s not how the federal government is supposed to work, and if you don’t have a problem with it, then you don’t ever get to bitch about government spending again for the rest of your life. How about that? How about we just make that a deal? If you don’t think it’s wrong that the Trump boys can spend $250,000 worth of taxpayer money in one single month at their own properties so that they get the money back, then you don’t get to complain about any government spending forever.

Because this, though not the biggest waste of government money that we’ve seen, is still a massive waste of government money, especially considering the fact that the administration announced this week they can’t expand veterans’ healthcare, so they’re probably going to have to cut it instead. So we’re going to cut healthcare for veterans, which Donald Trump tells us veterans are being treated better than ever under his administration, but we’re not going to say a word about his two little idiot sons traveling around the world, spending our tax dollars, just so they can check on their investments. There needs to be more investigations into the Trump Administration, and I know that’s … There’s already plenty going on, but clearly not enough, because this should not and by all accounts is not legal, but most of the things that Trump has done haven’t been legal. Most of the things that Kushner has done, and Ivanka, and Eric, and Donald Jr., they haven’t exactly been legal, and we have enough lawsuits and investigations to show that. Unfortunately, we still need a few more to really root out all of the corruption in this family.