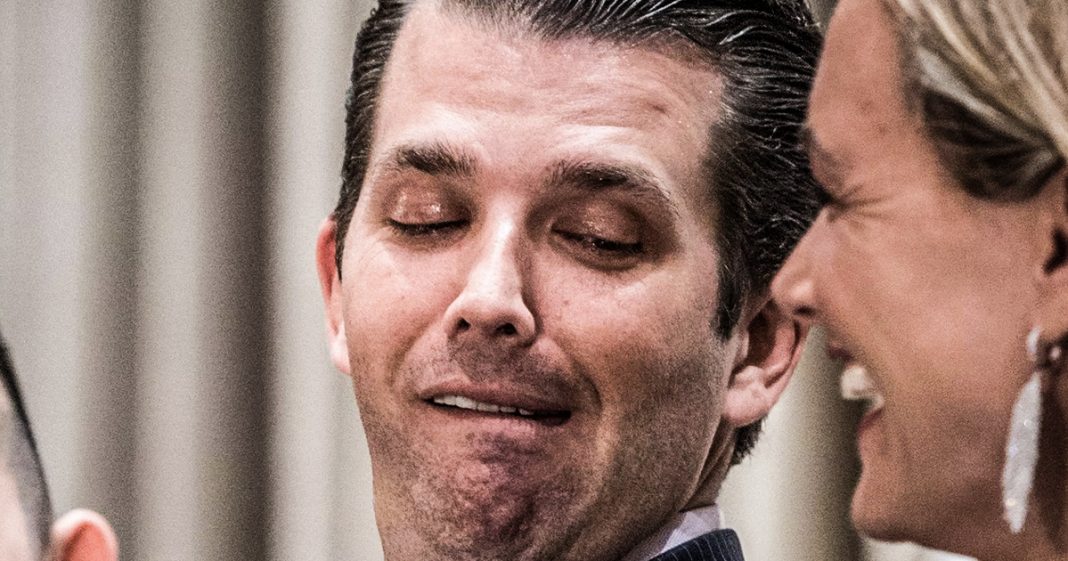 Donald Trump, Jr. should be very concerned – those are the words that Spanish investigators who have been monitoring and wiretapping Russian asset Alexander Torshin used to describe Trump’s meeting with Torshin during his father’s campaign. The Spanish intelligence agency has not yet confirmed that Trump is on one of their wiretaps of Torshin, but they have made it clear that things are looking bad for the little Trump. Ring of Fire’s Farron Cousins discusses this.

Donald Trump, Jr. Is in big, big trouble. And here’s why, and before we get into here’s why, just understand that those aren’t my words, no. That’s actually what Spanish intelligence officers are telling us, specifically a man by the name of Jose [Grinda 00:00:19]. He was actually in charge of an investigation into the Russian asset Alexander Torshin. And if you’re not familiar with Torshin, he is with the Russian Central Bank. He used to be with the Russian government, very close ties, good personal friend of Vladimir Putin, and he’s been operating in the United States as well as other countries to basically interfere as best he could on behalf of the Kremlin.

So Spanish investigators, their head investigative body, decided to put a wire tap on him. They wanted to know what the hell he was doing and what was going on. So Jose Grinda, in an interview this week, when asked if people should be concerned, or if that he, himself was concerned. He said this, “Mr. Trump’s son should be concerned.” Referring to the wire taps that they have gone through, and that, by the way, they have also turned over to US investigative bodies.

Now, while they didn’t say which investigative bodies they’ve given those wire taps to, most believe that obviously, these were handed over to the special prosecutors office, or, which is probably more likely, they went to the FBI for further investigation. Now, he also admits that the US, if they want to use these in any kind of trial or prosecution, or for specific charges against an individual, they will have to file new paperwork and make it official that they’re going to be using this Spanish information. But again, here’s the thing, we know that Donald Trump, Jr., the man who should be very concerned right now, met with both Alexander Torshin and Maria Butina, the woman who offered sex in exchange for positions at high ranking, high profile Republican and political organizations. He met with them during the time that Spanish authorities say that they did have a wire tap on Torshin.

Now, they did not specifically say whether or not that meeting was wire tapped, but the ominous warning that Trump, Jr. should be very concerned, is basically a tacit admission that they know something that one, Trump, Jr. doesn’t want them to know. And two, that could be potentially damning for Donald Trump, Jr’s. career, wherever he may want to go.

Again, very bad news for Trump, Jr., especially with all of the news coming out about Torshin himself, about Maria Butina, who the news about her, just honestly keeps getting worse by the day. People are going to start going down soon. We already have Republican Dana Rohrabacher, who’s been called Vladimir Putin’s favorite Republican member of Congress. He’s roped into this through his contacts with Butina. We know that she was offering sex to anybody willing to let her move up in an organization. We’re going to find out pretty soon, I imagine, if anybody took her up on that offer. We know she had close ties to the NRA. We’ve seen the photographs of her standing with people like Wayne La Pierre, Rick Santorum, Bobby [Jindal 00:03:42], Scott Walker from Wisconsin.

This woman managed to get at least close to many, many high profile, high powered Republicans in the United States. We also know that she met with Donald Trump, Jr. Now we find out that there might actually be tapes of those conversations. And that US investigators now have their hands on those. Donald Trump, Jr. Should be very concerned, and hopefully the American public, at the end of all this, will be able to breathe a sigh of relief if we’re able to get this awful family, the Trump family, out of the White House.