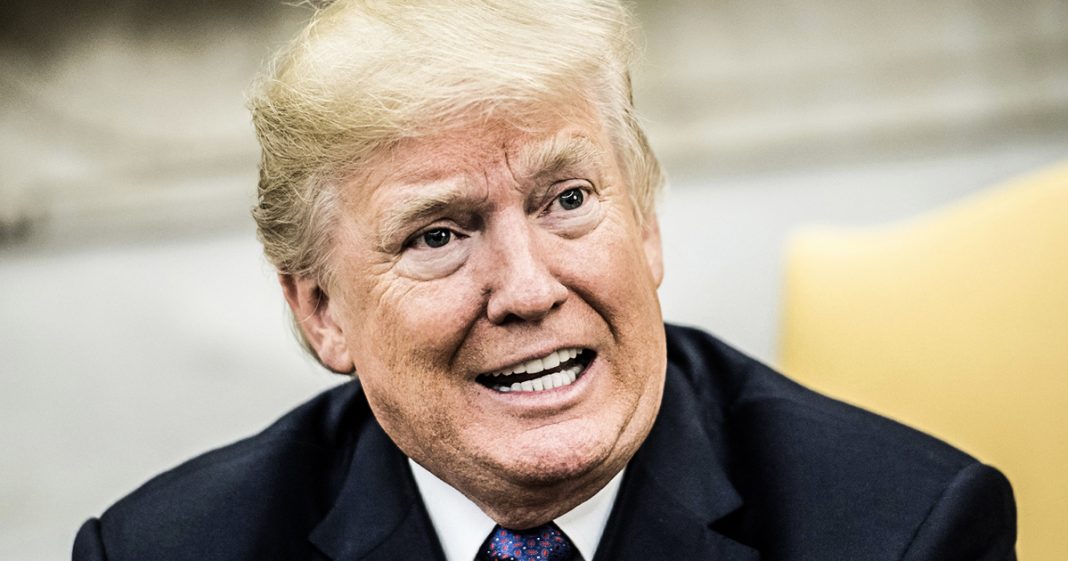 At this point, no one even knows if Trump is going to be able to run for President again in 2020, but that didn’t stop him from setting up a 2020 re-election fund and actively traveling the country to raise money. But before you send in your donation, you may want to be aware of the fact that this campaign fund is being used as a personal piggy bank for Trump to pay his mounting legal bills. So far this year, he’s taken more than $1 million from the re-election fund to pay his lawyers. Ring of Fire’s Farron Cousins discusses this.

At this point, it’s unclear whether or not Donald Trump will even be able to run for president again in the year 2020, you know, due to the fact that there’s all these investigations going on, they’re getting a lot closer to him, and also the fact that he committed some light treason earlier in this week. But nonetheless, Donald Trump has set up a 2020 reelection campaign fund to which many people have been giving money over the last 18 months really, because this guy started running for 2020 as soon as he was sworn in as president, so people are giving money. He’s going out there hosting fundraisers for people to give money to this 2020 election fund, and as it turns out, most of that money’s really not being used to run for president again.

Instead, some of it is being used to pay the Trump Corporation for consulting, allegedly, while most of the rest of it is actually going to pay Donald Trump’s legal bills. So far this year alone, more than $1 million has gone from Donald Trump’s reelection fund to pay his legal bills. I think there’s eight total law firms that they are having to pay. Some of these law firms are involved in his defense against the Robert Mueller investigation, while others are working on the Stormy Daniels defense. As Daily Kos pointed out, all you family values voters who are out there saying you support Donald Trump because you’re a good Christian person, just know that some of the money you’ve given to him is going to help pay off his defense from cheating on his wife with a porn star. That’s where the money is going.

What’s even more concerning about this though, is that portion of the money, which is only a few hundred thousand dollars, that’s going back to the Trump Corporation for consulting purposes. Can anybody tell me how that’s not a massive campaign violation? Donald Trump does not have any consultants in the Trump Corporation, at least no political consultants, at least none that would be worthwhile to pay, so why in God’s name is he going out there, doing a fundraiser, having people put money in a pot, and then taking money out of the pot to pay his own corporation for alleged consulting? He is pocketing this money.

This just becomes yet another thing that he needs to be investigated for. We already know for a fact that this family, the Trump family, can’t even be trusted with the money that goes into their own charity, because they used that as their own personal piggy bank, so we have no reason at all to believe that he’s not using his campaign funds as his own personal piggy bank, which is just as illegal as doing it with your charitable funds. There needs to be an investigation into this. There is no reason that the money that these morons who still support the president give to him for reelection should be used to pay his legal bills, and they sure as hell shouldn’t be going back to the Trump Corporation for bogus items like political consulting.