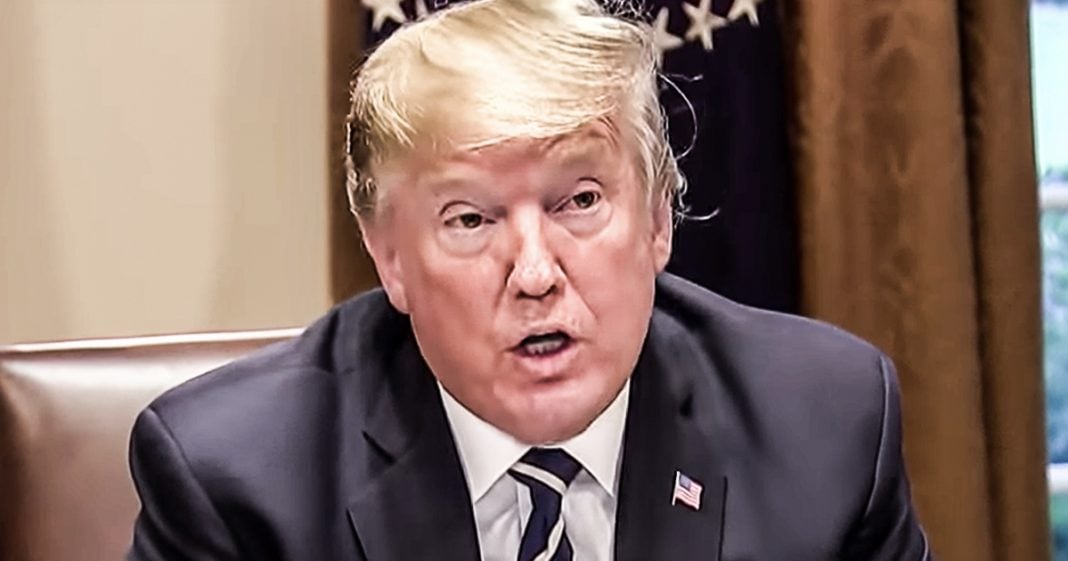 Donald Trump doesn’t believe that he’s the treasonous coward that the public thinks he is, and he wants all of us to know that he simply “misspoke” during his meeting with Putin in Helsinki when he said that he sides with Putin over our own intelligence agencies. But in order to believe that Trump is sincere, you have to ignore the photographic evidence that shows that he was lying to us once again. Ring of Fire’s Farron Cousins discusses this.

Donald Trump has apparently back-peddled on his statement from Helsinki on Monday, where he said that he takes the word of Vladimir Putin over the word of all of our intelligence agencies and all of the other investigations that it showed that Russia meddled in the 2016 election.

So on Tuesday, during the pool spray, where reporters were allowed to ask him questions, Donald Trump decided to read from a prepared statement where he said, “I accidentally said would when I meant wouldn’t,” and that was supposed to be the excuse that everybody bought as to why Donald Trump went on international television and sided with a foreign power over the United States.

While some Republicans in Congress actually said, “Well, Trump says it now, so I’ll take his word for it,” most of the public was not convinced, mainly because we can see with our own eyes what actually happened.

You see, as I mentioned, Donald Trump was reading from a prepared statement and luckily the New York Times was able to snap this photo that shows that not only did Donald Trump write in big letters there was no collusion, but if you’ll notice he also crossed out a line, and they found out that that line actually said, “And those involved in meddling should be brought to justice.” He crossed that out. He did not want to say that the people who meddled in 2016 should be brought to justice.

So it’s bad enough that we have few morons sitting in the House of Representatives and the Senate who actually believe that Donald Trump misspoke, what’s even worse is that he doesn’t want to come out and say that the people who screwed with our electoral system should be prosecuted. This man at this point … I mean we really are talking about traitorous activities, okay? This is treasonous behavior on behalf of the President of the United States.

All of the evidence points to the fact that a hostile super-power interfered with our elections, and he doesn’t even have the guts to say that whoever did it should be prosecuted or be brought to justice or, hell, even face a day in court. This man is not fit to be the President of the United States for so very many reasons, but his behavior in the last three days alone shows that he does not have the best interests of this country at heart. It’s all about him. It’s all about what he can get out of it, what he can make from it, and the alliances that he can create while President that are going to personally financially benefit him once he leaves office. That is what is happening right now.

This man doesn’t care about running this country. He cares about setting himself up financially for his last few years before he goes to that big great beyond. Because let’s not forget, Donald Trump is in his early 70s, and according to actuarial tables and when he was born, he doesn’t have a lot of time left on this planet, especially considering his diet, so he’s got to make a much money as fast as possible before his time finally comes, and that’s what he’s using the office of the presidency for.

That’s why he’s sucking up to people like Vladimir Putin and Kim Jong Un. It’s because he knows that he can make great real estate investments in those countries regardless of whether or not those alliances benefit the people of the United States, and his back-peddling on Tuesday did nothing more than secure his place as the worst President in US history.