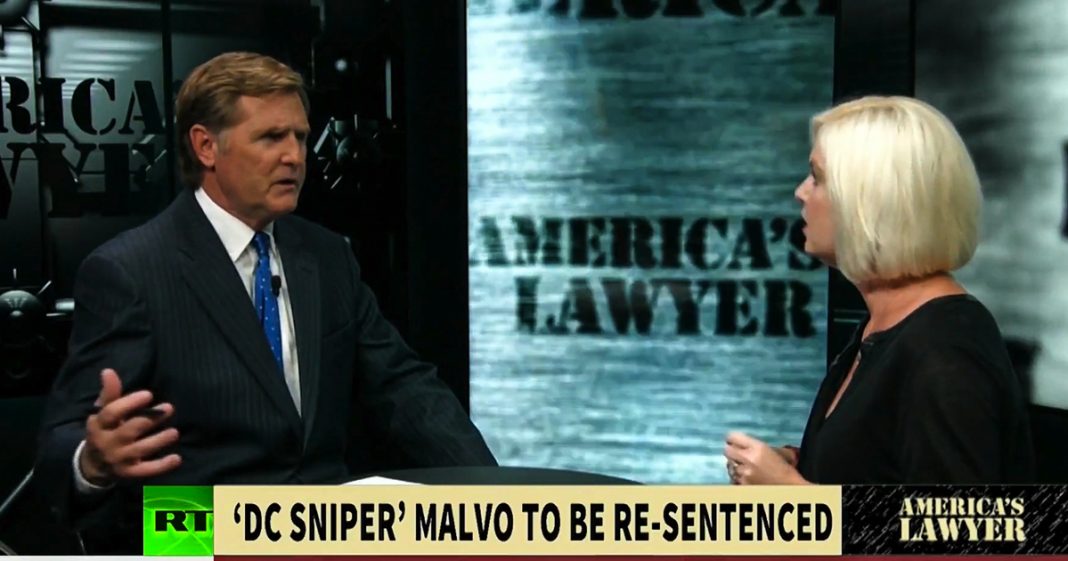 Via America’s Lawyer: Mike Papantonio is joined by Mollye Barrows to talk about Virginia’s Attorney General, waging a ruthless fight to block the possible re-sentencing of the DC sniper.

Mike Papantonio: Virginia’s attorney general is waging a ruthless fight to block the possible resentencing of the DC Sniper. This comes after circuit court decided to reopen the case of the man who helped kill 17 people with a sniper rifle, when he was 17 years old. Joining me to talk about this is Molly Barrows, legal journalist for the Trial Lawyer Magazine. Molly, you covered this story as a journalist-

Mike Papantonio: Years ago. What’s your take on this?

Mollye Barrows: It’s interesting. It’s a legal side effect, if you well, from the 2012 Supreme Court ruling that said juveniles need to be sentenced differently than adults, even if they’re sentenced for murder, even if they’ve been convicted of murder. In 2016, the U.S. Supreme Court made that decision retroactive, and so you’re seeing a lot of defendants, who’ve been sentenced as juveniles, now want to have the sentences vacated and brought back before the court to either be resentenced or, maybe, have their cases reevaluated. John Malvo is one of those.

Mike Papantonio: Yeah, remind us about the facts here.

Mollye Barrows: Yeah, so this is an interesting case. I remember, back in 2002, there was such massive media coverage. October, during those DC Sniper shootings is what they called them, and the attacks. It covered Virginia, and Maryland, and the DC area. It was Muhammad … John Allen Muhammad, 41 at the time, and then 17-year-old Lee Boyd Malvo. That’s a side backstory all the way around. Basically, the kid was manipulated by him, but they’re both still responsible. They carried out these crimes. The shooting spree even began months earlier in other parts of the country, and a tragedy all the way around. They finally were captured after a massive manhunt. Muhammad was put to death for his crimes, in 2009. Malvo is now 33. He continues to serve … I think he was sentenced to a total of 10 life sentences, essentially.

This is where the Supreme Court’s ruling comes in. He has had four of those sentences vacated, in the state of Virginia. In the state of Maryland, he’s facing six life sentences without parole. The judge there said, because the Supreme Court ruling said that it has to be a mandatory, that juveniles, who were sentenced to life in prison without the possibility of parole, due to a mandatory sentence, those are the ones that are basically need to be vacated.

Mike Papantonio: What are attorney generals … It seems like they’d be very concerned about this, because it creates a trend in their state.

Mike Papantonio: What are the attorney generals in these various states doing? Surely, they want to block this.

Mollye Barrows: Well, the attorney general of Virginia is fighting for this. He’s basically supporting the judge in Maryland who said, “I’m not vacating his six life sentences without parole, because our court had a choice at the time.” Well, Malvo’s attorneys argued, “Well, you didn’t really have a choice. The only choice was life in prison without parole or the death penalty, and we don’t feel like that’s a good enough choice,” whereas the federal appellate court in the Maryland circuit, basically, agreed that, yes, they should be vacated, because we’re going to uphold the Supreme Court’s decision. This Virginia attorney general wants to take it all the way to the U.S. Supreme Court and have them assess whether or not these other sentences should be vacated in Virginia, because they weren’t necessarily mandatory. Although, so far the federal appellate court doesn’t agree with that.

Mike Papantonio: Yeah, we make predictions on this show a lot. They lose at the Supreme Court level. For some precedent, it already has existed up there for some time. Thank you. We’re going to follow this story. It’s an interesting story as it develops.