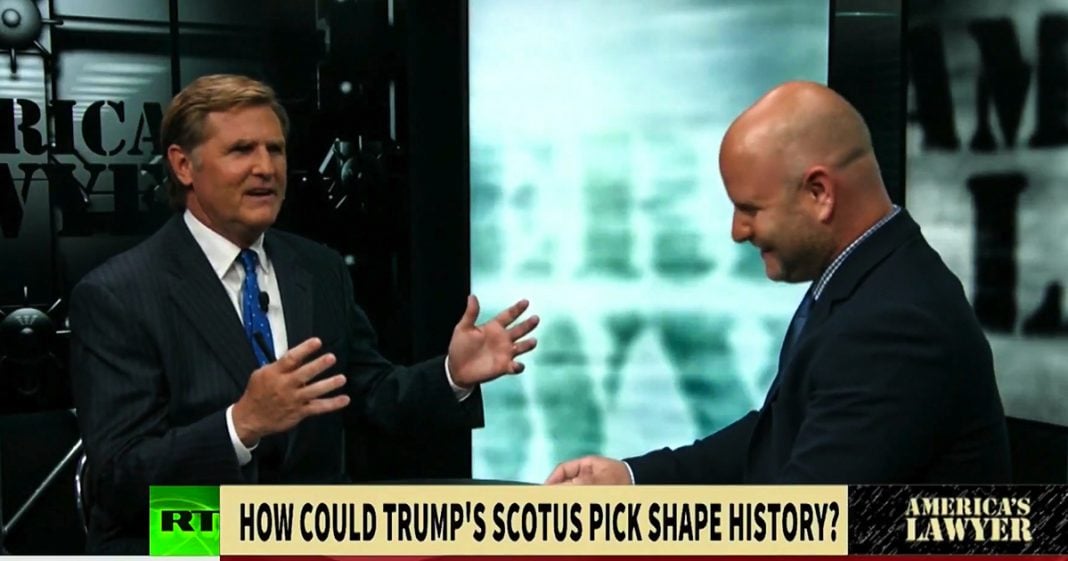 Via America’s Lawyer: Mike Papantonio and Farron Cousins discuss how Trump’s Supreme Court pick, Brett Kavanaugh, will shape history, and why aren’t Democrats talking about other important issues like workers, voting rights and the environment?

Mike Papantonio: When Donald Trump was sworn in, he inherited a vacant Supreme Court seat that Mitch McConnell held up for nearly a year to prevent Obama from appointing a replacement for Antonin Scalia. That vacancy was filled by religious fundamentalist and loyal corporate stooge, Neil Gorsuch. Recently, Justice Anthony Kennedy announced his retirement, which opened the door for a second Trump SCOTUS appointment, and after much suspense, President Trump nominated Judge Brett Kavanaugh, a politically connected member of Washington’s conservative legal establishment.

But if you’ve been listening to how Democrats are framing the problem, the only thing they’re talking about is what this means for Roe v. Wade, but they aren’t talking about other important issues like workers and voting rights and the environment. The only talking point they can muster involves the Roe decision, and yes, that decision and precedent is important, but there are countless other issues with the Supreme Court that are equally as important.

We also have to remember that the Supreme Court is not the only court in this country that matters. Trump inherited 108 federal judicial appointments from Obama that Democrats and corporate media outlets have been almost silent about. Those counts and those courts matter just as much as the Supreme Court, but we aren’t hearing Democrats sound the alarm bells about corporate hacks that Republicans are filling our courts with.

Joining me now to talk about this topic is Farron Cousins, Executive Editor of the National Trial Lawyer Magazine.

Farron Cousins: I mean, look, two of the biggest court decisions that have come out of the Supreme Court in recent years. You got D.C. v. Heller and you have Citizens United. Kennedy actually wrote the opinion, the majority opinion, for Citizens United, which essentially destroyed, well, definitely the Democrat Party, but a lot of the political system. D.C. v. Heller was a huge gift to the gun industry. Gerrymandering, he’s all for it, destruction of unions, which we just got a couple of weeks ago. Then, look at this, 57% of the time the guy voted conservative, on ideological issues 71% conservative here, and then Thomas, who is the most conservative justice on the court, that was only 66% versus 57 for all time for Kennedy. So he wasn’t that far off from the top, but listen to this. Civil rights 88% of the time, Kennedy’s against it; due process 77% against it; privacy 83% against it. The guy was awful.

Mike Papantonio: Okay. So, we have all the liberals saying, “Oh, my God. Whoa is me. We’re getting a conservative.” Yeah, we’re getting another conservative, that it was almost as if Kennedy, this thing with Kennedy was to make Kennedy feel like he was different, but we knew he wasn’t different.

What can we expect from this new Trump appointee? I’ve looked through the numbers. It’s terrifying and all we’re hearing about, “Oh, my God. He’s terrible about Roe v. Wade.” Really? What about workers? What about the environment? This guy’s awful on issues that really matter to us.

Farron Cousins: He is. He had wrote an opinion one time to try to undo part of the Clean Air Act. While everybody’s talking about Roe v. Wade, this guy’s trying to make sure we breathe dirtier air. He has consistently ruled against workers in favor of corporations. We’re going to see a lot more of that. Well, to be honest, I can’t even say a lot more of it because Kennedy was that way too. I’m not thinking there’s going to be much of a big difference. It’s going to be awful, but it’s not going to be any different than the awfulness we already see.

The message coming from the Democrats is predictably weak. It’s way off. We both know how important Roe v. Wade is, no question about that, but there are other things that the Democrats need to focus on to have a broader message for the public to say this guy is dangerous for a lot of reasons and it’s not just Roe v. Wade. What’s your take?

Farron Cousins: Yesterday, finally, Elizabeth Warren was the first Democrat I saw … not saying she was the first, first one I saw that actually mentioned things without mentioning Roe v. Wade. She talked about the environment, how bad he’ll be. She talked about workers’ rights. She talked about consumers. Bernie Sanders an hour or two later was saying the same thing, but the rest of the Democratic Party is out there with these scare tactics saying Roe v. Wade and, yeah again, very important. If you get rid of that, women will die. We know that. But if you dirty up the air, the environment, the water we drink, if you take away workplace protections from OSHA, and then you have worker’s dying. You have people dying from respiratory diseases and cancers from the chemicals we drink. Those affect everybody, rich, poor, Republican, Democrat, everybody.

Mike Papantonio: Yeah. It’s almost as if the Democrats have sought out the worst advisors they can get.

Mike Papantonio: It’s almost as if, “Let’s go find the worst advisors we can get to gel our message.” Now, Roe v. Wade is not a bad argument. That’s an important argument, but it’s not a, it doesn’t … It’s not big enough to say, to say, “Maybe you need to do something about this.” Understand, this guy was already permitted, he already passed mustard for the appellate court in D.C. He already got past the vote one time. Now, that was kind of a protracted process, wasn’t it?

Farron Cousins: It was. There were some issues there, and it was, I think overall maybe close to a three-year confirmation thing they had there. They didn’t want to let him out of committee at first because he had some skeletons in his past, but they worked through those. They got past it. This guy will get past the Senate vote. We’re going to see Democrats like Manchin, predictably. He’s going to come over. He’ll slide through no problem, but-

Mike Papantonio: No. I think you got Heidi Heitkamp out West. You’re going to have Manchin. You might even have-

Mike Papantonio: Exactly. You might even have Doug Jones on this. You conceivably could have McCaskill because she’s in trouble.

Farron Cousins: But, see, when you look at the Roe v. Wade argument too, that is something that if the Democrats want to make that the talking point, you won’t get moderates out there to support-

Mike Papantonio: No. No.

Farron Cousins: This at all, but if you talk about air, water, workers’ rights, you can get them.

Mike Papantonio: Okay. So, here’s the million dollar question. We know the answer because we’ve seen it so much. Who’s pulling the strings? All right. We look back in history. We see these horrible appointments, I mean, awful appointments that have been made. We see the Chamber of Commerce, the Federalist Society, associated industries, and all of corporate America is really telling Trump who to appoint. Is this any different?

Farron Cousins: No. Absolutely not. The Federalist Society has been behind most of all the judicial appointments that Trump has made because Trump is not a guy who ever really knew much about the courts. He doesn’t know how this stuff works.

Mike Papantonio: Well, he spent a lot of time in bankruptcy.

Farron Cousins: True, but he’s going to rely on people to tell him who to pick, and he’s got The Federalist Society in Mitch McConnell’s ear. McConnell’s then telling Trump who to pick, and the funding for The Federalist Society is all over the place. You’ve got the Koch brothers and all these other right wing foundations that get money from corporations, Exxon, all the usual suspects. So, those are the companies basically that are picking these judges because nobody else wants to take the time to do it.

Mike Papantonio: Farron, thanks. This is one we’re all gonna be following for quite a while.