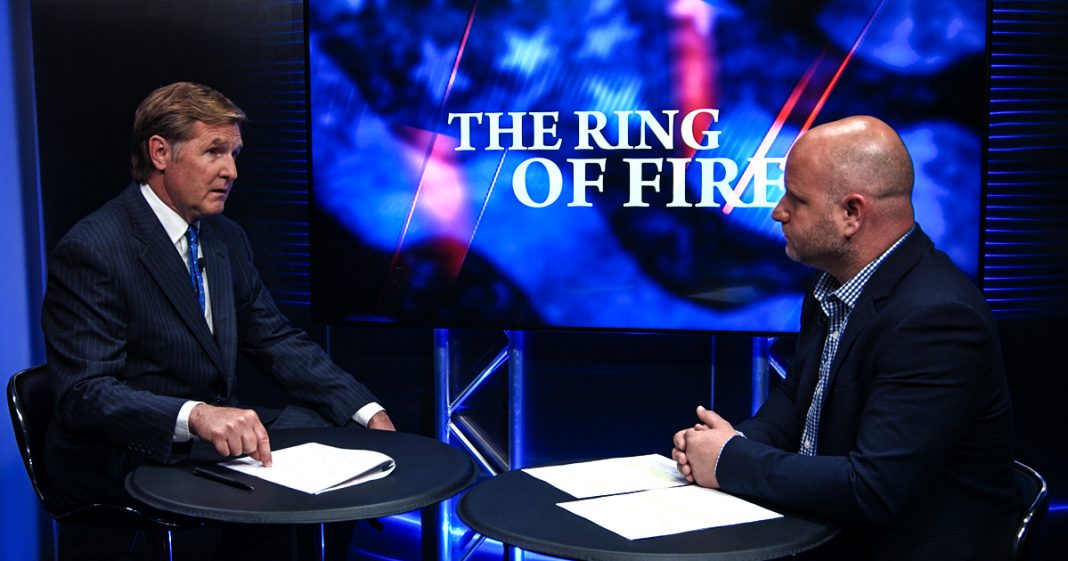 When Donald Trump was sworn in, he inherited a vacant Supreme Court seat that Mitch McConnell held up for nearly an entire year to prevent Obama from appointing a replacement for Antonin Scalia. That vacancy was filled by religious fundamentalist and totally corporate stooge Neil Gorsuch.

Mike Papantonio: When Donald Trump was sworn in, he inherited a vacant Supreme Court seat that Mitch McConnell held up for nearly an entire year to prevent Obama from appointing a replacement for Antonin Scalia. That vacancy was filled by religious fundamentalist and totally corporate stooge Neil Gorsuch.

But if you’ve been listening to how Democrats are framing the problem, the only thing they’re talking about is what does this mean for Roe v. Wade? But they aren’t talking about other important issues like workers, and voting rights, and the environment. The only talking point they can muster involves Roe v. Wade. Yes, that decision and precedent is important. But there are countless other issues at the Supreme Court that are equally important, that we have to consider here.

Also, we have to remember that the Supreme Court is not the only court in this country that matters. Trump inherited 108 federal judicial appointments from Obama the Democrats and corporate media outlets have been almost completely silent about from day one.

Farron, I look at this story … I mean, I think Elizabeth Warren, maybe, is figuring out that the talking point is bigger than Roe v. Wade. But it’s almost as if the Democrats have nobody in charge … It’s like Home Alone! It’s like freaking Home Alone for the Democrats. Nobody has said, “Yeah, this is a guy who’s terrible on the environment. He is terrible on worker’s rights. He’s terrible where it comes to consumers versus corporations.” What’s your take on what’s going on here? This is nuts!

Farron Cousins: I think the messaging from the Democrats might actually be as bad as their 2016 campaign messaging here. Because, yeah, Roe v. Wade, absolute one of the top three most important decisions we’ve had from the Supreme Court. There’s no question about that, but you can’t use that as a talking point, because the only people who are going to get energized by that are the people who already support you, and don’t want this appointment.

Farron Cousins: So you’re preaching to the choir, and it does nothing. It’s falling on deaf ears. However, when you take the fact that Brett Kavanaugh wanted to do away with the Clean Air Act, well last I checked, I’m pretty sure every human being in the United States is breathing air.

That’s an issue every one of us can get behind, saying, “Yeah, you know what? I don’t want all these … arsenic, and mercury, and toxins in the air, and the water, and the soil. Maybe this is a bad pick.” But instead, they have to go to that.

You’re not going to attract any kind of moderate opposition by citing Roe v. Wade. You can’t do it.

Mike Papantonio: Okay, okay. Look. People out there understand something’s wrong with this guy. All they’re hearing, all that’s wrong with him is Roe v. Wade. No! What about his relationship with corporate America? There has never been a corporation that this guy has not found in favor of versus consumers.

As a matter of fact, this is one of the issues that held him up when he was actually appointed to the appellate court. It was one of the issues that people actually focused on. It wasn’t Roe v. Wade. It wasn’t just guns. It was the fact that, listen, what matters big time in this country is the way that a judge allows a corporate entity to trample on the rights of workers, and consumers, and the environment.

I mean, these things really matter, but again, you’ve got a party that is … When I say “Home Alone,” I swear to God, they are home alone, and they don’t seem to be able to find themselves out of the forest.

Farron Cousins: Well, Kavanaugh was part of the Ken Starr team investigating Bill Clinton. His appointment to the appellate court … or the other federal court, from George W. Bush, he was actually held up for almost three years, and it was because during his time with Ken Starr, he was illegally leaking things to the press-

Farron Cousins: Right. This guy engaged in unethical behavior. He leaves the Ken Starr investigation, works in the government, then he leaves there for a bit, and he goes to Kirkland & Ellis, who is-

Farron Cousins: … just as bad as Covington Burling. Kirkland & Ellis are the ones sitting there trying to argue that BP has no liability for destroying the entire Gulf of Mexico. That’s who Kavanaugh is.

Mike Papantonio: Yeah, okay. Here’s part of the bigger problem, too. It’s not just Kavanaugh. It is that … there’s 108 appointments that Trump gets to make at the appellate level and the trial level. Well, all these numbnuts fought … The only thing that’s important to them is SCOTUS! That’s not where law is made.

You may have federal courts, appellate courts, that make decisions that affect 100 times the numbers of cases that the Supreme Court even looks at. Most of them never even make it up to the Supreme Court. But consumers get trampled on in the lower courts.

Again, it’s so Democrat. It is just so typical of the New … not … It’s been like this for 20 years. My God! It’s this Democratic Party. It is that the special interests that are now kind of just mulling around out there. There’s no organization to them. There’s nobody in charge that says, “Hey, Roe v. Wade is very important, and gender rights are important, and these other social issues are important, but we’ve got to get together and talk to the American public.”

Now, what the interview was about is, you’ve got special interests groups that matter. I’m not saying any one of them is less important than the other. They all matter. This is what used to be the Democratic Party. We have open arms, and we want to include everybody.

Farron Cousins: Well, it’s remarkable when you consider the fact that all they want to do is talk about Roe v. Wade. Again, I don’t want anybody saying that we think it’s not important. It’s hugely …

Mike Papantonio: The e-mails are going to come in, “I can’t believe you guys don’t think … ” I mean, I’m so tired of it! Because that is what I’m talking about. It is these branches … these little sub-parts of the Democratic Party that are destroying the Democratic Party. Because if somebody would take control, and say, “Hey, hold off just a second on Roe v. Wade, let’s talk about the fact that this is a guy that wanted to do away with the Clean Air Act in America.” That’s something that people can understand.