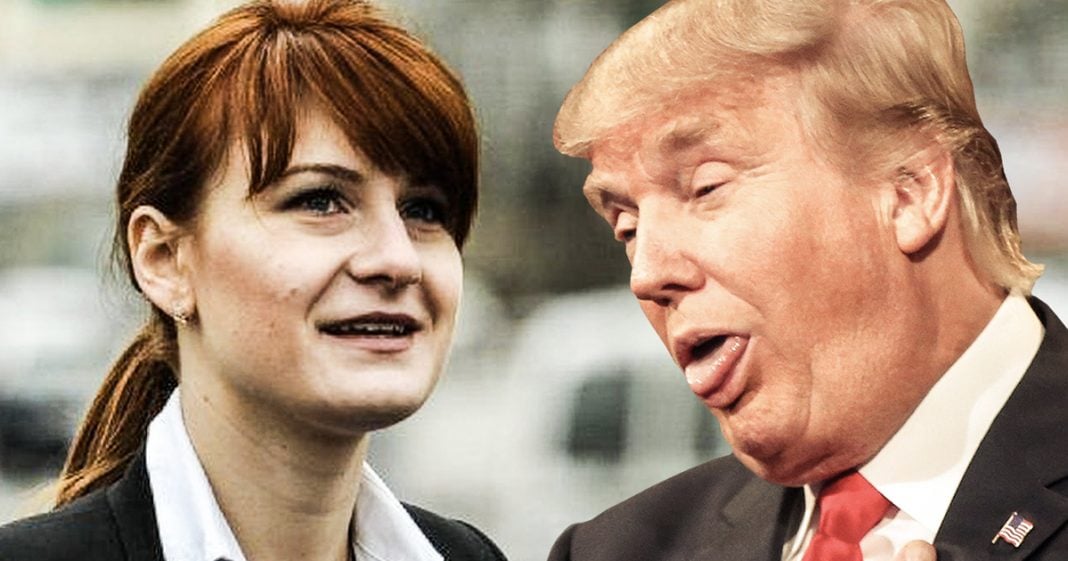 Maria Butina, the Russian national who was arrested for infiltrating the NRA and attempting to use her power to sway US politics, has very clear ties to the Trump family and once offered to set up a communication line between Trump and Putin. Mother Jones also uncovered footage from a 2015 Trump rally where Butina posed as a simple audience member and got Trump to say he’d lift sanctions on Russia. While this doesn’t prove collusion, it certainly isn’t a “nothing burger”, as Ring of Fire’s Farron Cousins explains.

On Sunday, the United States arrested a woman by the name of Maria Butina. Maria Butina happens to be a Russian national with high ranking contacts inside the Kremlin. And she was arrested, according to the release by the US Department of Justice, for conspiracy to infiltrate groups inside the USA in order to influence them to be friendlier and give favorable policies to Russia. Basically, she was hired by the Kremlin, sent over here to the United States, to infiltrate powerful groups, make powerful connections, and basically change US politics in favor of Russia.

Now I don’t know about you, but to me, that sounds very important. Almost as important, if not more so, than Donald Trump bowing down to Vladimir Putin on Monday. I think this is actually a bigger story.

And here it is. Here is what happened. Butina came over here. She became a member of the NRA kind of worked her way through that organization, meeting people. She attended White House prayer breakfasts and all kind of events in Washington DC where she met and interacted with very high profile people within the NRA and the Republican party.

Her contact over in Russia was a man by the name of Alexander Torshin, senior official at the Russian Central Bank, who’s also a long-time associate of the NRA. He was placed under sanction earlier this year by the United States. He was her contact. He had close ties, was getting his orders from the Kremlin directly, telling Butina what to do, who to meet with, how to do things. And at one point, both Torshin and Butina had a private, little meeting with Donald Trump Jr. That is probably the most important take away from this entire story.

Republicans and even some Democrats have been crying for months and months, if not over a year, that there’s no hard evidence of collusion, there’s none. It’s not there. It doesn’t exist. Really? Cause the DOJ just arrested a woman who was sent here by Russia to influence US politics and we can easily place her in a meeting with Donald Trump Jr.

But that’s not the extent of her connections with the Donald Trump family. Take a look at this clip of Butina posing as just an average Russian person in an audience asking Trump straight up, in 2015, at an event in Las Vegas, if he would end the sanctions on Russia.

Maria Butina: I’m visiting from Russia. So my question-

Maria Butina: My question will be about foreign politics. If you would be elected as a president, what would be your foreign politics especially in your relationships with my country? And do you want to continue the politics of sanctions that dimension of both economy or you have any other ideas?

Donald Trump: Okay. Obama gets along with nobody. The whole world hates us. You know, it’s an amazing thing. You look at Mexico, they hate us. They hate our leadership. And yet, they’re making a fortune. China hates us. China’s building ports in the south China sea. We could never do a thing like that because we’d have to get environmental impact statements, so we don’t. I jokingly said to a friend, “Do you think they got an environmental impact statement when they did that?” So China hates us, and yet they’re making … Everybody hates us, and yet they make money with us. With me, we’re gonna make money on them, and they’re gonna like us. I know Putin, and I’ll tell you what, we get along with Putin. Putin has no respect for President Obama. Big problem. Big problem.

And Russia has been driven … You know, I’ve always heard, for years I’ve heard, one of the worst things that can happen to our country is if Russia ever gets driven to China. We have driven them together with the big oil deals that are being made. We’ve driven them together. That’s a horrible thing for this country. We have made them friends because of incompetent leadership.

Now, don’t get me wrong, that clip does not prove that Donald Trump colluded with her in any way at all. However, given the fact that we know she was a Kremlin asset, and we know that she didn’t act on her own and was being given orders on what to do and how to do it, do you think she just happened to show up there and maybe just as a Russian citizen wanted to know if he’d lift the sanctions? Or was she sent there to find out if she was there to find out if he would lift the sanctions so that they would know who to support, who to help, who to reach out to during the campaign? I’m gonna go with the latter.

So, yeah, that little clip doesn’t say, “Donald Trump colluded with her.” He didn’t even know who she was, yet. She became a very integral figure in this entire Russian collusion story. And the fact that the DOJ itself, which is packed with Donald Trump’s appointees and many, many, many, many Republicans felt the need to arrest her, none of that bodes well for Donald Trump or his family.