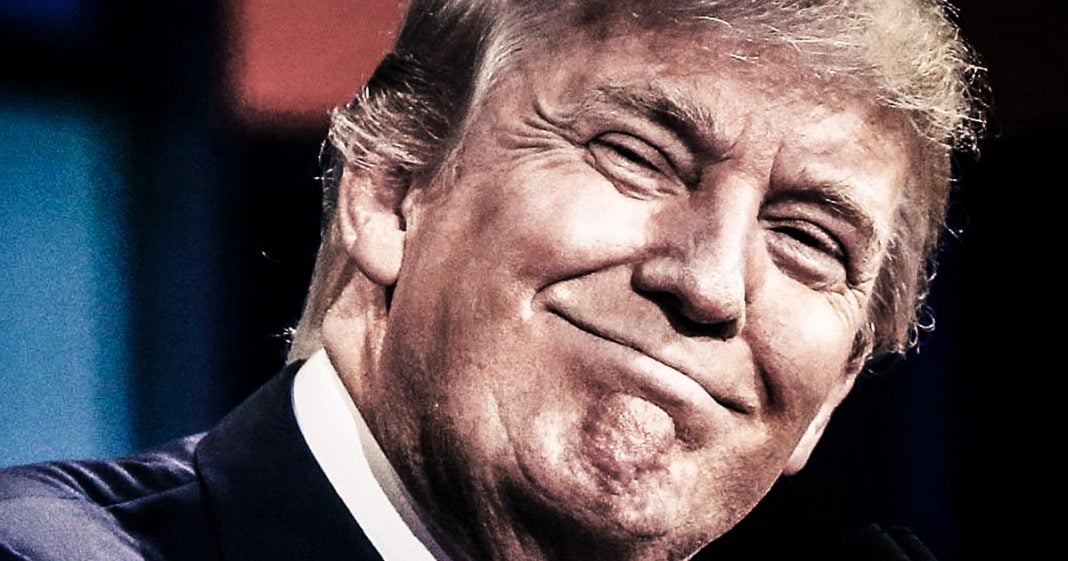 During his visit to the UK, Trump refused to take a question from a CNN reporter, and then proceeded to snub the news network for the remainder of his trip – a snub that he openly bragged about. But during his bragging, he also admitted that he was watching CNN to see how they were covering his snub. This man has mental problems, as Ring of Fire’s Farron Cousins explains.

Starting last Friday, Donald Trump did his little tour around Europe. He met with NATO and offended them, and then he went over to the United Kingdom where he was doing a joint press conference with Prime Minister Theresa May, and during that press conference, CNN’s Jim Acosta asked Donald Trump a question, and Donald Trump refused to take the question from Acosta. He called CNN fake news, and then he immediately said he wanted to take a question from Fox News, because they were real news.

So Donald Trump snubs CNN, then later on he got on Twitter to not only brag about the snub, but to also reveal that he’s actually watching CNN. Here’s a tweet. “So funny. I just checked out fake news CNN for the first time in a long time, they’re dying in the ratings, to see if they covered my take down yesterday of Jim Acosta, actually a nice guy. They didn’t. But they did say I already lost in my meeting with Putin. Fake news.”

Um, so, you snub CNN just so you could go back to your hotel room and watch CNN to see if they talked about the snub, and then when they didn’t, you got mad. What the hell is wrong with you? You are supposed to be the President of the United States, not some little grade schooler who picks on a girl that he has a crush on and then asks his friends like, “Oh, did she say anything about me later after I did that?”

That’s not how global politics work, you idiot. Yet, that is what you are doing. You must really have a crush on CNN in order for you to behave this way. I mean, I can’t think of anything else that makes sense here, other than the fact that something happened to you when you were a child, some kind of traumatic head injury that left you permanently with the mindset of an adolescent, because that is exactly what you’re acting like right now, it’s exactly what you’ve been acting like since the day you announced your presidency, and it’s pretty much how you’ve acted your entire life. CNN is not fake news. Fox News is fake news. Yet, you seem to constantly confuse those two, possibly because your son is sleeping with one of the Fox News hosts.

I don’t know exactly what it is, but I do know that it’s bad for this country. What’s also bad for this country is when you later on get on Twitter and admit that you only snubbed them so that you could go back home and tune in to CNN to see how they talked about the snub, which, to their credit, they didn’t bother doing, which only pissed you off more. You are a sad, sick, pathetic little human being, and the longer you stay President of the United States, the more damage you do, not just to our country, but to our country’s global reputation, because that’s something that’s gonna take a hell of a lot of time to fix, and yet you, mostly through your ignorant little Twitter feed, seem to be doing a phenomenal job of destroying that.