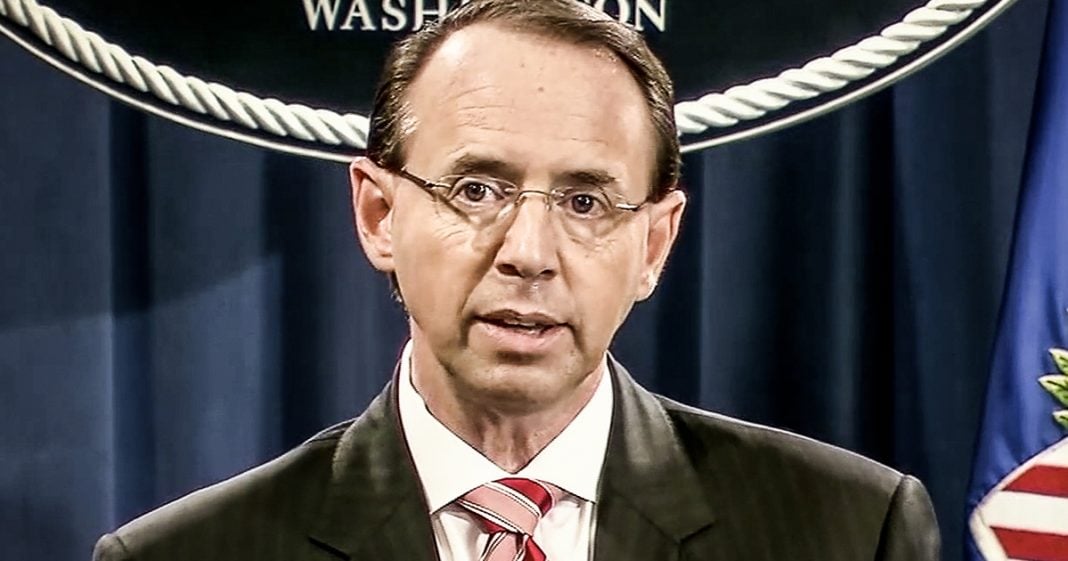 For reasons that they haven’t been able to make clear, Republicans in the House of Representatives are working on a plan to impeach Deputy Attorney General Rod Rosenstein. The effort, being led by embattled lawmaker Jim Jordan, is certain to fail, but that might actually be the goal of these conservatives, as Ring of Fire’s Farron Cousins explains.

Now, technically, according to this Politico report, the impeachment was not because of the indictment of the 12 Russians, and spelling out how they hacked the DNC and then use that to coordinate with Wikileaks to coordinate with Russia to determine the best timing to release it that would have the biggest negative impact on Hillary Clinton. No, that’s not what they’re mad about, they’re mad that Rosenstein has allegedly not been giving them all of the information that they want with regards to the ongoing Mueller probe.

So, led by Jim Jordan, the guy that did absolutely nothing about the fact that the wrestlers that he was coaching were being molested by their doctor, Jim Jordan’s leading the charge here along with Mark Meadows, Republican from North Carolina, and they firmly believe that they’re going to be able to impeach Rod Rosenstein. Well, here’s the problem even Republicans like Trey ‘Benghazi’ Gowdy announced on Sunday talk shows that yeah, I’m not going to support that. That’s actually a really stupid idea, and there’s no basis whatsoever for impeaching Rod Rosenstein.

But here’s the reason that people like Jim Jordan are trying to do this. Jordan specifically needs a little bit of good publicity right now. And obviously, impeaching Rosenstein most of us would think that that’s not good publicity. But for Jordan’s idiotic base, it absolutely is. The people in this country who support Jim Jordan are the same people who support Donald Trump, who also happen to be the same people who think that the Robert Mueller probe is a complete witch hunt.

So, if Jim Jordan who’s already facing a very tough reelection battle given all these sexual molestation charges that he ignored, he needs a win. And coming out and saying, “Look, I tried to impeach Rosenstein the guy overseeing this investigation. But none of my Republican brethren my back. So, it didn’t pass. But damn it, I tried to do it, and I tried to do it for you. So that we as a country can move on from this, and let Donald Trump just let America be great again.” That’s what Jim Jordan’s trying to do here, and I guarantee you any other Republican that signs on to this probably trying to do it to gain a few extra points as the midterms are rapidly approaching.

Republicans are in trouble. They don’t know what to do. They’ve never faced a campaign like this in their lives where they’re stuck between voters wanting something done about Donald Trump and Donald Trump attacking them on Twitter. So, they’re all siding with Donald Trump instead of the voters back home. That never works out very well for politicians. Just ask the Democratic Party after their losses in 2010, 2012, 2014, 2016. They pretty much did exactly the same thing. The voter said, “Hey, we want this stuff.” And Democrats said, “Yeah, but we’re really not going to do that. We’re not going to fight back against the Republicans. We’re just going to do what we do, and go talk to some corporations and get more campaign money even though we know you hate it.”

Jordan is in the same situation, a lot of Republicans are in the same situation. Their voters want something done about Donald Trump, yet they’re too unwilling to do anything to stand up to this man. Instead, they attack the law enforcement agencies, they attack Rod Rosenstein because they think that maybe, just maybe that might be enough to save their asses for another two years.