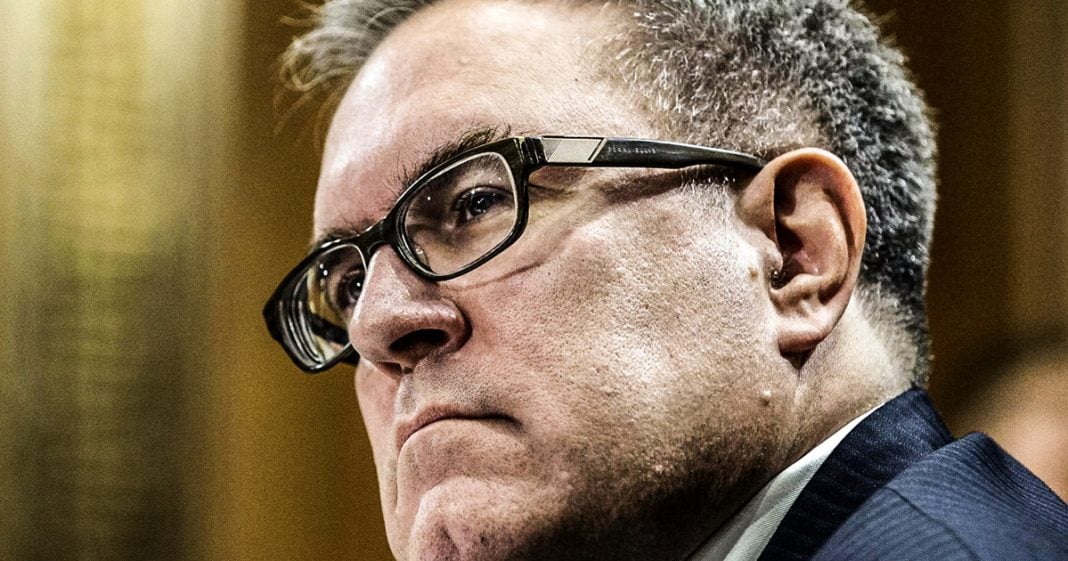 Andrew Wheeler, the man who has at least temporarily taken over as the head of the EPA after Scott Pruitt’s resignation, has already been meeting with lobbyists and influencers from the fossil fuel and chemical industries. Make no mistake – environmental policies will not change AT ALL under Wheeler’s leadership, and the horrid policies are Scott Pruitt were the only reason he was allowed to stick around as long as he did. The only question is whether the media will continue paying attention. Ring of Fire’s Farron Cousins discusses this.

So Scott Pruitt has only been gone from the EPA for a few days longer than one full week and already his acting replacement, Andrew Wheeler has been meeting with industry officials and former members of industry itself, fossil fuel companies, chemical companies, automobile manufacturers, who are actively influencing his policy after only being on the job for one week.

We know right now that so far they have actually appointed two people. One, a former lawyer from Dow DuPont, two companies that have poisoned countless people all around the globe, and two, one of the other advisors is the former environmental guy from Ford Motor Company. You know, after they spent so much time trying to lobby for the government to not enact stricter fuel standards. Those are the two people right now who are currently advising Andrew Wheeler and he’s also been in several other meetings with members from the fossil fuel industry and other representatives from the chemical industries.

And I had said this for months, that Scott Pruitt, one, he would never get fired from the EPA. They would never force him out and though there have been some reports saying Donald Trump was ready for him to go, Pruitt himself made the decision to resign. But it wasn’t because of his environmental policies. Republicans allowed Scott Pruitt to stay in office 12 months after the first scandal involving him broke that would have taken any other government official off the job that day. They let him stay there because they agreed with what he was doing. They liked the fact that he was destroying the environment and giving their corporate donors everything they’ve ever wanted. And back then, I said if Scott Pruitt ever did leave, whoever replaced him, ’cause at the time didn’t know if it would be Wheeler, whoever replaced him would be just as bad on policy. And guess what? We’re only one week in and we’ve already confirmed that.

Here’s the bigger problem. The media loves a good scandal, right? That’s why they actually talked about Scott Pruitt. They didn’t spend too much time talking about how he wants to repeal the Clean Air Act and Clean Water Act, and the Clean Air Rule that Obama put in place. No, no, no. They didn’t talk about that stuff. They talked about the scandals. The tactical pants that he spent thousands of dollars on. The used Trump Hotel mattress. All of that. My concern here is that if Andrew Wheeler doesn’t get involved in any scandals and doesn’t do anything stupid, they will not cover the environmental destruction that is going to come out of this office. And we actually know that for a fact. Why? Because they didn’t do it during Obama, even though yes, it did happen. They didn’t do it under Bush. The corporate media doesn’t talk about climate change and environmental protection. They just don’t. Media Matters has actually done a phenomenal job of keeping track each year of how much time networks spend talking about climate change and the environment. And it is as close to zero as you can get.

Wheeler is going to have free reign to destroy the environment on behalf of corporations which he’s already meeting with and the media’s not going to say a word because they don’t think that environmental stories, you know … stories about the water we drink, the air we breathe … they’re not sexy enough to sell the advertisers. So, the same thing that’s been happening for more than a decade is going to continue to happen. We’re going to have EPA administrator destroying the environment. Republicans out there lying to us about climate change, helping their donors pollute this country a little bit more and the media is going to remain completely silent.