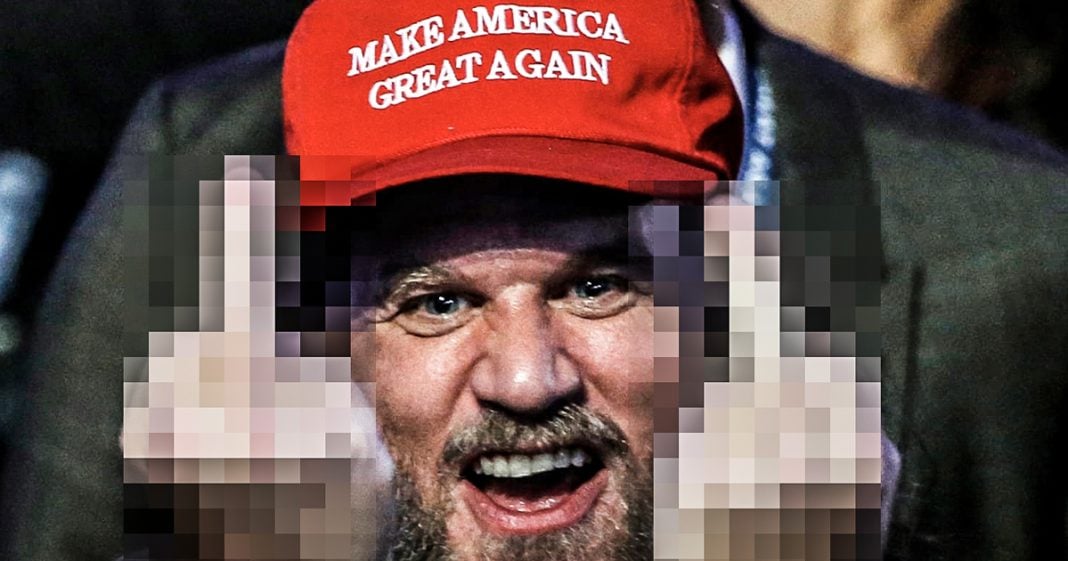 The tariffs that Donald Trump has put in place are not only having the opposite effect that he had predicted, but they are also disproportionately affecting the people who put him in office. So far 65% of the job losses and expected job losses from the tariffs have happened in counties that voted for Trump, meaning his voters are getting screwed the most from his policies. Should we be sympathetic, or is it time that people learn the consequences of their voting habits? Ring of Fire’s Farron Cousins discusses this.

You know, I oftentimes find myself wanting to have a ton of sympathy for the people who voted for Donald Trump yet find themselves continuously screwed over by this administration, but to be honest with you, the more we see these stories of these MAGA hat-wearing people out there harassing minorities, acting like the race police basically, and all of the other horrible things that we see them post online, I’ve got to say, I’m out of sympathy. And this story here is another example of just why it’s getting harder and harder to care.

See, as we all know, Donald Trump has engaged the United States in a massive trade war with countries all over the planet. And right now, the United States actually appears to be losing those trade wars because, much like Bush with Iraq and Afghanistan, Donald Trump entered these trade wars with absolutely no exit strategy. He knows nothing of global economic policy, and therefore he’s decided to just screw us all over.

But, according to a new report, he’s actually screwing over the people who voted for him more than anyone else in this country. 65% of the retaliatory tariffs that other countries have placed on the United States are directly affecting counties that voted for Trump. 65%, so we’re talking two-thirds of the tariffs that have been put in place by other countries on our country are directly affecting the people who voted for Donald Trump. Only 35% are affecting counties that voted for Hillary Clinton in the 2016 election.

But here’s the kicker. Some of these counties where the tariffs are hitting the hardest, and we’re talking about potentially 1,046,686 jobs that could be lost in red counties alone in the United States, upwards of two million total from the trade wars. But over one million red county jobs are at stake, and part of it is because countries like China are actually pretty smart with what they’re doing.

They’re not just trying to harm the United States. What they’re trying to do is harm Donald Trump himself with his voters, because they tailored their tariffs to directly affect those counties, to directly affect the reddest areas of the United States. They knew what they were doing. And it is sad when anybody loses their job. Hell, if we lose these one million or two million jobs that are currently being projected within the next year, that is going to absolutely decimate the U.S. economy, and we do not need that to happen.

We need a remedy for Donald Trump’s trade wars before he destroys this economy that Barack Obama took eight years to try to correct and still couldn’t even finish it. This is not something that can be turned around in four years or eight years. And we’re on the cusp of the hardest part of an economic recovery when we’re at the most vulnerable to outside forces. These trade wars will, according to economists, send us into another recession, possibly within the next 12 months. And if we lose another one million, two million jobs in this country, we could be right back in the same situation we were in in 2007.

But Trump doesn’t care about that. He doesn’t care that the people who put him in office are suffering, that they’re on the verge of losing their job, and that thousands upon thousands already have lost their jobs because of his trade wars. It’s 100% because of that. And again, I’m finding it hard to find sympathy for these people. They did this to themselves. They knew what they were getting into. Trump was very clear about what he wanted to do as President of the United States.

But I will end with this important message. Remember that when you go to the polls this November. When you’re struggling to feed your family, when you’re struggling because you don’t know if you’re going to walk into work tomorrow and be handed your walking papers, remember how this happened to you, because it happened 100% because of the backwards policies of Donald Trump. And don’t ever forget that.