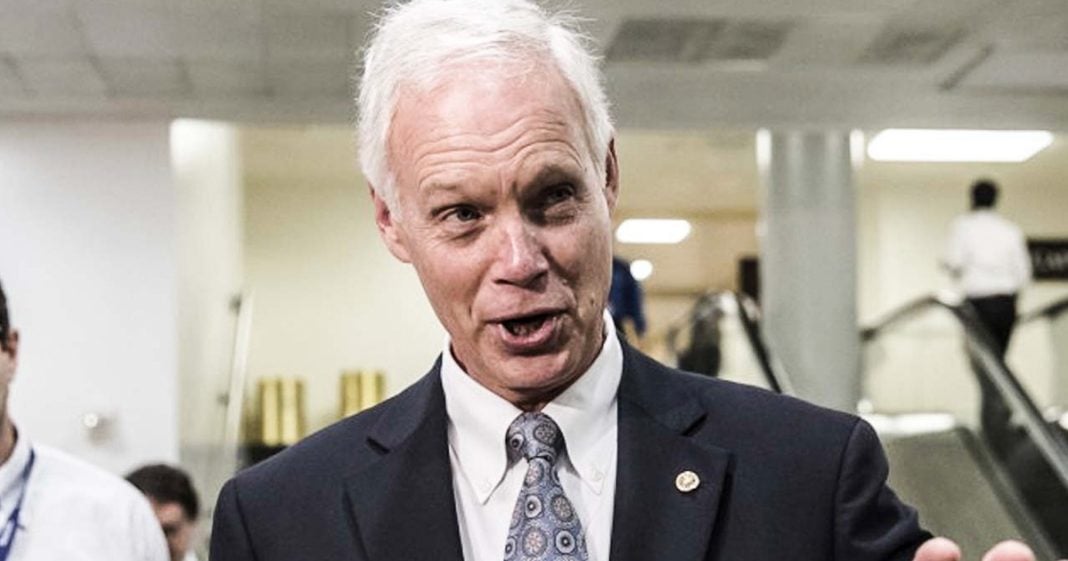 The group of Republican Senators who spent the 4th of July in Russia meeting with officials can’t seem to agree on what actually happened during their time in Moscow. One Republican, Ron Johnson, claims that the meetings were great but that our sanctions against Russia should be eliminated and that their election interference over here isn’t that big of a deal. His traveling companions disagree with him, creating a weird mix of stories about what actually happened. Ring of Fire’s Farron Cousins discusses this.

Last week on America’s Independence Day, the Fourth of July, multiple Republican senators decided to spend that America holiday in Moscow meeting with Russian officials. Now, technically there’s nothing wrong with that. I am all for open dialogues and meeting with other countries, even if they’re hostile to us. We need to be speaking to them. Unfortunately for the Republicans who attended that Fourth of July meeting in Russia, their stories aren’t exactly matching up. As it turns out, the accounts given by different Republicans who were there are contradicting the accounts given by the other Republicans who were there. Basically, no body could seem to keep their story straight about what actually happened behind closed doors in Moscow. And that should terrify you.

What should also terrify you is the fact that one of the leaders of this little delegation, Republican Senator Ron Johnson, left the meeting saying that we need to get rid of the sanctions that we have in place on Russia. They’re killing them. And Russian election interference isn’t that big of a deal, I don’t think we should worry about it. In fact, here’s his exact quote. “You’d be hard-pressed to say that sanctions against Russia are really working all that well.” He went on to say about the election interference, “It’s not the greatest threat to our democracy. We’ve blown it way out of proportion.” So, again, and I feel the need to repeat this, because there’s too many on the right. And unfortunately still too many on the left willing to say that Russia didn’t interfere with the 2016 election. We know they did. Every single intelligence organization in this country has agreed to that. The Republicans in the Senate just agreed that it happened. The evidence, the IP trails point exclusively to Russia getting into our systems. That is indisputable. That is evidence and you cannot try to argue against it, because the evidence speaks for itself.

And Ron Johnson has the audacity to come back from Russia and tell us, “It’s not a big deal.” I know we’re coming up on mid-terms where we already know they’re going to try to do stuff, but don’t worry about it. It’s just the American democratic process that’s at stake here, and how cares about that? Right? Who cares if vote totals get changed, or if election machines malfunction because somebody has hacked into it? That’s not a big deal at all. Donald Trump seems to echo those sentiments. But, luckily the other Republicans who were present at that meeting said that, that’s not really what happened at all. They said that they went into the meetings, talked extensively about Russian election interference, warned them about doing it again. And while they agreed that the sanctions don’t appear to be that affective, they also agree that it’s not starving the Russian economy in any way. Average citizens are not getting hurt as Senator Ron Johnson told us they were.

One of the people who went out there and contradicted Ron Johnson’s claims, because he was there, was Richard Shelby from Alabama. If you have an Alabama Republican who is not even willing to support your mindless pro-Trump pablum, then you’ve got a very real problem, Ron Johnson. Further more, these same senators including Shelby, said that Ron Johnson when he was talking about the sanctions hurting them, he only said that after meeting with business leaders in Russia, who are feeling a bit of a pinch. Pinch was the word they used, because of the sanctions. They’re not making as much money as they want to be making. But, is it hurting the citizens? No. Is it crushing the government? No. It’s just hurting businesses and Ron Johnson, like a good loyal little Republican, he loves those corporations, regardless of what country they have to be in. That’s where his loyalty lies. Whether you’re a Russian company, a North Korean company, English, American, Mexican, he doesn’t care. He loves all corporations equal, there’s no discrimination against corporations for a guy like Ron Johnson. He doesn’t even care if it means selling out the democratic process here in the United States by saying that election interference is no big deal, and we’ve probably overblown it a little bit.

My advice to anyone who is in Ron Johnson’s state of Wisconsin and has the opportunity to vote for him again next time he’s up for re-election, is to not do it. And then when he complains about losing say, “Well, maybe you should have taken that election interference thing a little bit more seriously, because why would we vote for a guy who doesn’t seem to even care about our right to vote?”