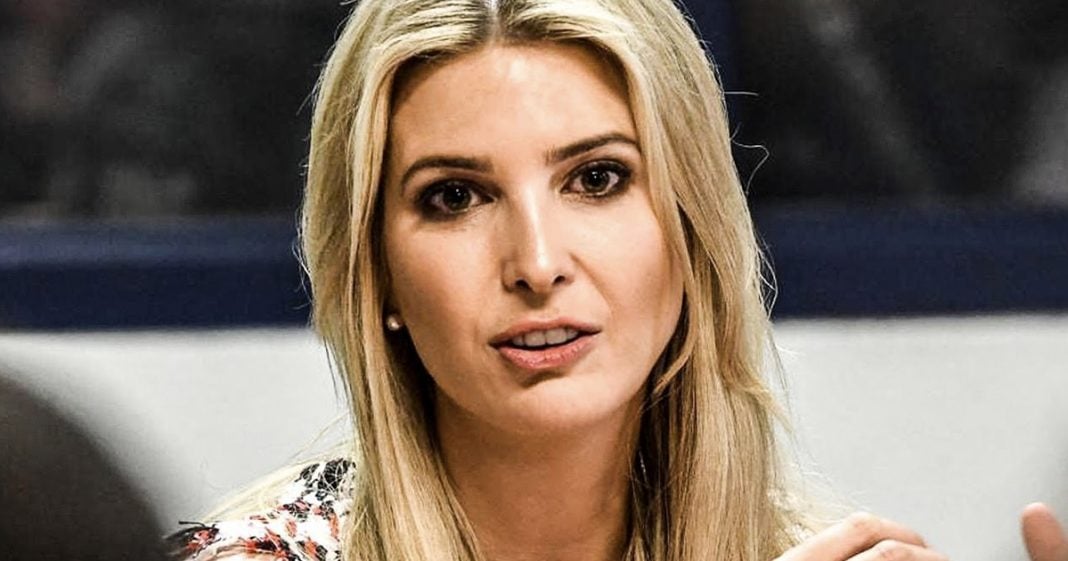 Thousands of American jobs have already been lost due to Donald Trump’s trade wars, and more than one million could be on the chopping block in the next 12 months if he doesn’t stop his destructive ways. But one person who isn’t feeling the sting of the trade wars is Ivanka Trump, since her clothing lines have been “miraculously” spared from the tariffs. Ring of Fire’s Farron Cousins discusses this.

Just days after Donald Trump announced an additional $34 billion worth of tariffs on goods coming to the United States from china, China retaliated against the United States by putting tariffs on more of our goods. And then Donald Trump tweeted out, “Well, hey, maybe I’ve got an additional $50 billion, maybe even $200 billion worth of tariffs to slap on Chinese made goods.” The trade war is escalating at an unprecedented pace. And the people who are suffering the most are Donald Trump’s voters. As we reported earlier this week, 65% of the tariffs that China has imposed on the US, directly affect red counties here in the US that voted for Donald Trump over Hillary Clinton in 2016. They are deliberately targeting Donald Trump’s voters.

But do you know who nobody is targeting right now, someone who has been spared from all of these horrible tariffs that are causing thousands of people to lose their jobs? Ivanka Trump. Right now, 100% of Ivanka Trump’s goods that she sells with her name on them, 100% of them are made outside of the United States. Yeah, I know Donald Trump likes to say we should make things here and buy things here. But that doesn’t apply to him or his daughter, because all of her goods, and most of his goods, are made overseas. And most of Ivanka’s goods are actually made in China. But so far, clothing, which is what everything that she slapped her name on falls under the category of, has been spared from any tariffs put in place by the Trump administration. I wonder why that is, especially when you consider the fact that clothing goods are one of the main things that China ships over here to the United States. It would seem, if you were trying to prove a point on how unfair trade is, that would be the first thing you’d slap a tariff on.

But no. Why? Because of his daughter. He knows that if he puts tariffs on her goods, or all clothing goods coming into the United States from China, his daughter’s gonna lose a ton of money. And if that happens, then what’s the point of even being president? Because as we all know, those of us who aren’t living in an alternative reality, the only reason Trump wanted to be President was so that he and his family could make more money. And Ivanka Trump has been doing a beautiful job of using her position in the White House to make more money for herself and her businesses. And these tariffs that have miraculously spared her goods? That’s not a coincidence. It’s by design. Trump would never, ever do anything that would hurt the financial prosperity of his name.

Meanwhile, the rest of the Trump voters in this country, or at least 65% of them, you’re gonna lose your job. Your industry is gonna tank. Your wages could be slashed as a result of this. All the goods you go out and purchase on a daily basis could see their prices rise exponentially. And Trump doesn’t care, as long as his little baby girl keeps making her millions and he keeps making his millions, because his goods made overseas also aren’t taxed coming back into the US. Then what’s the point? You guys sit there, these Trump voters, because I saw on the tweet the other day, when Trump was talking about putting more tariffs on Chinese goods, they’re applauding him. They’re praising him. At the same time, they don’t even realize they are the ones being most affected by it. This is cult mentality. And they need to wake up and understand that Trump is using every bit of his power as President to make himself and his family more money at the expense of your livelihood.