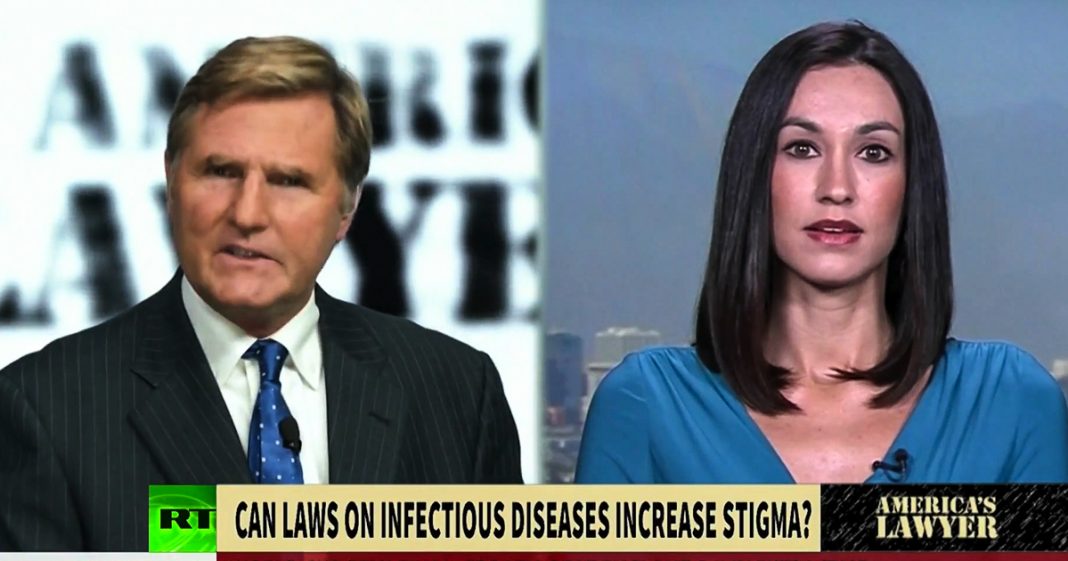 Via America’s Lawyer: In many states it’s a felony for people who know they have HIV and viral hepatitis to intentionally expose another person and officials say these laws exist to protect the non-infected community, but advocates think otherwise. Brigida Santos joins Mike Papantonio to give the details.

Mike Papantonio: In many states, it’s a felony for people who know they have HIV and viral hepatitis to intentionally expose another person. Officials say these laws exist to protect the noninfected community. Advocates, however, disagree and say these laws criminalize the sick and further increase their stigma in society. Joining me to talk about this is RT correspondent Brigida Santos. Brigida, could you first of all explain what these laws are. Lay it out for us just a little bit.

Brigida Santos: Well, Mike, these are laws that make it illegal for somebody to knowingly, intentionally or recklessly infect another person with a sexually transmitted disease like HIV or hepatitis C. Now the keyword is knowingly, meaning they are aware that they have these diseases. If they’re not aware, then they cannot face criminal charges. If they are aware of the fact that they have an infection, most of these laws require them to disclose that information to a partner before engaging in any sort of sexual activity.

Mike Papantonio: Well, here’s the problem I see right off the bat as I look at this, states have a right to protect … They’re called police powers. They can protect health, safety and welfare. That means that they’re given broad reach where it comes to that. This clearly falls into the health issue. It’s going to be very difficult to argue that that doesn’t fall squarely within a state’s police power. If you’re taking this up the court system through appellate court all the way up to SCOTUS, you’re always going to have to overcome the argument that the state doesn’t have the right to do that. It’s a clearcut case of arguing that police powers do kick in here.

It looks like these laws differ from state to start, Brigida. Do you know why it’s not been taken up at the federal level or if that’s even a good idea? I would suggest that it’s not going to go far in the federal level. What’s your take?

Brigida Santos: It hasn’t gone far enough to the federal level because it hasn’t become such a big problem that the public is calling for things to change. However, there have been two bills introduced in the past to actually repeal laws that criminalize transmission of HIV. Now those were first introduced in 2011 and then reintroduced again in 2013, but both of them ultimately died. They did gain support however, but really we’re not seeing them go to the federal level because again it hasn’t become a big enough issue for people to really care about and galvanize them.

Mike Papantonio: Well, you’re going to have differences state to state. Okay? You can have one state saying it’s a felony and another state may say it’s misdemeanor. You’re going to have issues that an appellate court could look at and say, “Yeah. This is something that needs to be decided at a federal level.” I guess if I’m a prognosticator, I’m saying it doesn’t go very far in the federal system as far as telling a state that they can’t do this. I think it’s a very, very difficult burden. Have there been circumstances where an infected person was jailed under these laws that we’re talking about?

Brigida Santos: Yes, absolutely. In fact, somebody in Ohio, a man was recently jailed for 18 months after spitting at police and medical workers in Cleveland and he had hepatitis C. Now you cannot spread hepatitis C through saliva, but in Ohio it is illegal for an infected person to threaten other people with their bodily fluids. A woman in Florida was also recently charged for giving a partner HIV. She was aware of her status since 1996 and failed to tell her partner whom she had met on the dating app Tinder and he did get infected. The list goes on here. As you said, the laws do vary from state to state.

Some states it is reasonable to say if you’re aware of it, you can’t go spreading it around, but there are also other laws that are completely ridiculous in my opinion saying that if you have a disease and your partner is aware of it and they consent to it and even if you use a condom, it is still illegal.

Mike Papantonio: I guess when we analyze this, the end of the analysis is where does this go, right? It’s going to be state court by state court that’s going to decide have we gone too far? Is a felony too much? Is the sentencing for this particular felony too much? I don’t ever see, at this point, I really don’t see the feds getting involved in saying, “Gee whiz. This state doesn’t have the right to do that.” I think that’s a very farfetched push. Who are the advocates against the laws? Why do they feel like a person shouldn’t be criminalized if it’s a predatory type step where they knowingly spread a disease not by mistake, but by design? Where are the advocates coming from on this?

Brigida Santos: The advocates in this case are not coming from the intentional standpoint. They’re actually looking at it from a data standpoint. These would be health education advocates and even the National Institutes of Health and the Centers for Disease Control and Prevention, which are against these because they have done extensive studies that actually show that these laws do not prevent transmission of diseases like HIV.

Instead what they do is they stigmatize the disease further and encourage people not to get tested because if they don’t get tested, they can’t be aware of the fact that they have a disease and therefore they cannot face criminal penalties. That data is available for people to look at.

Mike Papantonio: Isn’t this the same analysis that we always use in what we can consider a criminal event, a criminal transaction? Isn’t it based victim against the perpetrator? Don’t we also look at the victim? I mean let’s say that there are situations, there certainty are going to be situations where there’s some stigma related to this. What about the victim? You see cases where … There was a man in … Another case in Florida where them man intentionally set out to infect as many women as he could. I mean what do you do with that?

Do you say, “Well, gee whiz, the victim has no right here. It’s the predator that we have to protect.” I mean that’s where the argument really gets interesting to me where it comes to deciding who’s right and who’s wrong and what’s the middle ground. What is your take when you’ve looked at this? I mean it is a predator versus victim kind of situation often, isn’t it?

Brigida Santos: Absolutely. I don’t think anybody is arguing against that fact. Anybody who is intentionally targeted and given essentially a death sentence through one of these diseases should absolutely have the law on their side to prosecute somebody for what could account to murder in the long run or manslaughter, however they want to legally define that. Of course people are going to want laws to protect people in those cases, but again I think intention is everything. Again if certain states are having laws that just scientifically do not make sense and they’re not coming from a standpoint of somebody intentionally doing it, then those could potentially be harmful.

Again it’s up to the court to decide what will happen to somebody in those cases.

Mike Papantonio: Yeah, and that’ll be state by state. Brigida, thank you for joining me.