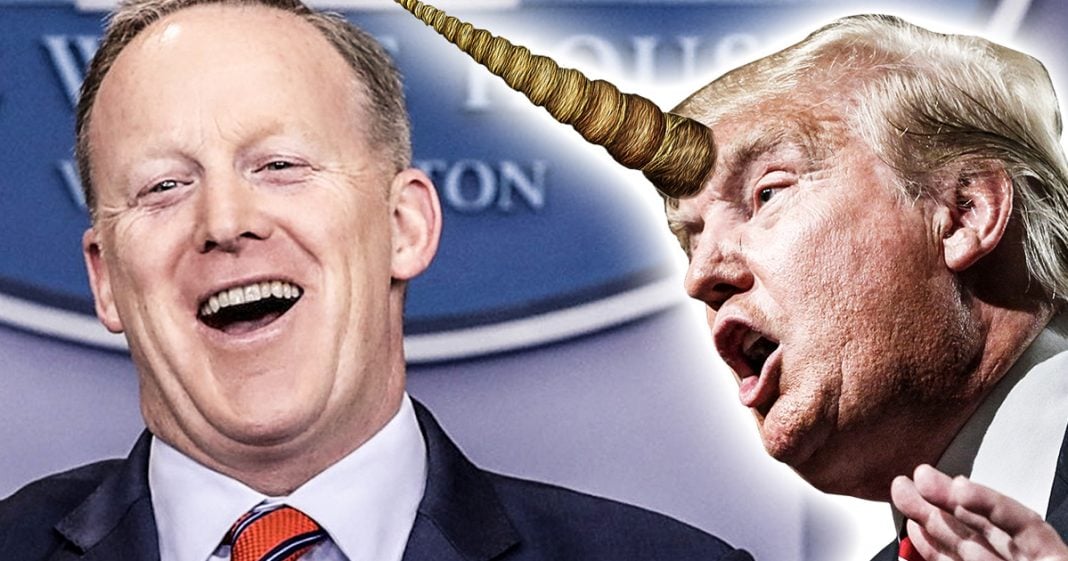 Former White House Press Secretary has a new book coming out soon, and in an excerpt published by The Guardian, Spicer says that Trump has an innate ability to withstand scandals like no one else, and that this makes him a “unicorn riding a unicorn over a rainbow.” Twitter was quick to mock Spicer’s delusional description of Trump, and rightfully so, as Ring of Fire’s Farron Cousins explains.

In case you weren’t aware, former White House Press Secretary, Sean Spicer, has a new book coming out, and I’m sure we’re all just desperate to get our hands on what’s soon to be a bestseller. Well, The Guardian actually published an excerpt of the book this week where they talked about, or they posted a part where Sean Spicer discusses Donald Trump’s innate ability to escape scandal. Scandals that would have, according to Spicer himself in this excerpt, taken out any other politician, would’ve ended their career like that, but Trump, not him. He can survive anything, and that is why Sean Spicer said the following about Donald Trump. “He is a unicorn riding a unicorn over a rainbow.” A unicorn on top of another unicorn riding a rainbow. That’s how unique and rare Donald Trump really is.

You know, it would’ve been perfectly fine to say a unicorn, something that doesn’t exist, but no, Sean Spicer took it to 11 and went with a unicorn on top of another unicorn riding over a rainbow. That is some grade A ass kissing right there, and it makes me wonder why Sean Spicer is even bothering with it. You left your job at the White House. We already know that nobody else wants to hire you. You’ve got a TV show in production that’s probably not ever going to really see the light of day because all the guests you’ve invited on have already said, “No thank you,” so why are you still kissing Donald Trump’s ass? Does he have dirt on you? Are you worried about him flipping on you for something? I mean, this is utter insanity. Not to mention the fact, to address the real actual issue here other than the unicorn on unicorn action, is the fact that the reason Trump has survived all of these scandals so far is because he’s had people like you to go out there and lie about them to the press every single day.

You must be the unicorn that Donald Trump’s unicorn is riding on top of. Because if not for people like you, he wouldn’t have survived them all, but I guess you got tired of being Trump’s unicorn, so you retired. You let Sarah Huckabee Sanders come in and be the new unicorn, and man, she’s flying him even higher over that rainbow. You must be super proud of that, Sean Spicer.

The other reason Trump has managed to survive all of these scandals is because his base, they’re pretty much painfully stupid. They don’t believe any of it happened because they only watch Fox News, and Fox News is known for never telling the truth. So, yeah, it’s not that Donald Trump is just a stronger human being than everybody else. It’s that he managed to court the dumbest voters in America to support him, and that’s why his base doesn’t believe that any of these scandals are real.

That coupled with the fact that we have nothing but a bunch of spineless, mindless conservatives in the House and Senate, and it makes the perfect storm for Donald Trump. But again, that’s all possible because of you and your lying, Sean Spicer, and now that you’re gone, Sarah Huckabee Sanders, again, has cranked it up even higher. You helped create this unicorn flying over the rainbow, and I hope you’re proud of the destruction that it’s caused.