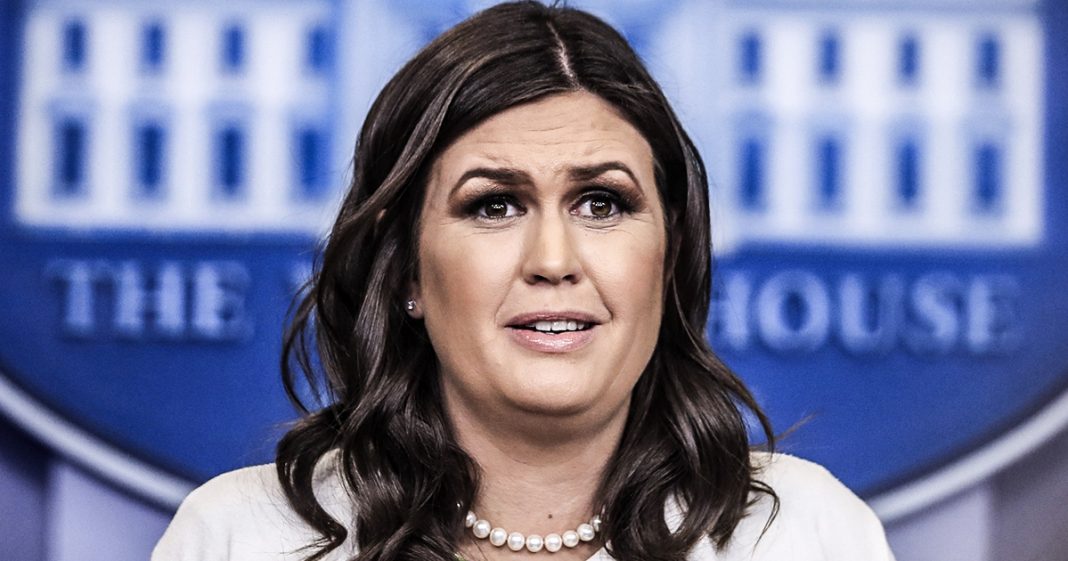 Trump’s Chief of Staff John Kelly grew visibly agitated during Trump’s tirade about Germany being controlled by Russia, and at one point it looked as if he was going to get up and leave the room. But Sarah Huckabee Sanders says that it had nothing to do with Trump making baseless claims to our allies, John Kelly was just upset about the breakfast food that was being served. Ring of Fire’s Farron Cousins explains why Huckabee Sanders lied about this and how she was given the perfect opportunity to just be honest for once and absolutely failed.

By now, I’m sure everybody knows that Donald Trump went to Berlin, and said that Germany is controlled by Russia. Well, what some people may not know, is that when Donald Trump was saying those very stupid things, John Kelly was as few seats down from him at the same table, and he grew visibly agitated to the point where it looked like he was going to leave. Here’s a clip of John Kelly reacting to what Trump is saying.

Donald Trump:
So you tell me, is that appropriate? I mean, we’ve kept complaining about this from the time I got in here. Should have never been allowed to have happened, but Germany is totally controlled by Russia because they were getting from 60 to 70% of their energy from Russia in a new pipeline. And you tell me if that’s appropriate because I think it’s not. And I think it’s a very bad thing for NATO, and I don’t think it should have happened, and I think we have to talk to Germany about it.

So it’s pretty obvious to anybody watching that, John Kelly’s not happy with the stupid things Donald Trump just said, right? Well Sarah Huckabee Sanders, who is also traveling with the President, gave an interview to The Washington Post later in the day, where they asked her about John Kelly’s reaction there. And in true Sarah Huckabee Sanders’ fashion, she could not tell the truth. In fact, here is exactly what she said, “Kelly was displeased because he was expecting a full breakfast, and there were only pastries and cheese.”

So John Kelly wasn’t mad about what Donald Trump was saying, how he was offending our allies. No. He was mad because he wanted, I guess, eggs and bacon, and they only had pastries and cheese. Now again, if you go back and look at that clip, there’s no food there at all, right? All the plates were empty. There didn’t appear to be any kind of settings out there, of food. So first of all, we can verify that what Sarah Huckabee Sanders is saying, isn’t true because there wasn’t even food out there yet.

Second of all, John Kelly, General John Kelly, is a military man. What is the military known for? Discipline, right? So I don’t think that this grown man, who spent his life in the military, would be throwing a huffy-puffy, temper tantrum because he’s being served pastries instead of a full breakfast. Sarah Huckabee Sanders’ claims fall apart immediately under scrutiny, but here’s the thing. We know this woman lies, we know that she lies constantly, but she was given the perfect opportunity here. To say, “I have not spoken with John Kelly. He seemed perturbed. Maybe he disagreed with the President, but he didn’t want to say anything at the moment.”

That is how you handle that diplomatically. It’s not a lie. It doesn’t implicate you into saying, “Yeah, Kelly was pissed, and Trump said something bad.” No. You play the middle, you don’t tell a lie, and you tell The Washington Post that if they want to get an answer, they need to go speak to John Kelly about it. There you go. But instead, you took the deceitful way out of it Miss Huckabee Sanders, by lying about why John Kelly was angry, when anyone who watches that very short 10 second clip, can see exactly why John Kelly got mad at Donald Trump. Had nothing to do with breakfast, and it had everything to do with Donald Trump’s stupidity.