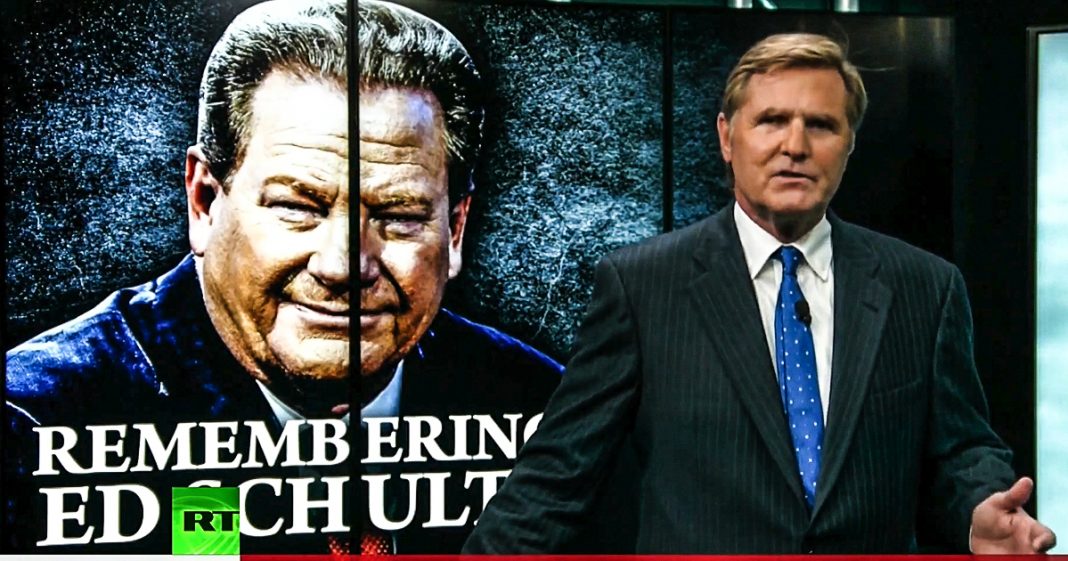 There’s an empty room at RT America and a gaping hole in the world of journalism with the loss of Ed Schultz. It’s a loss that couldn’t have come at a worse time, a time when reporters and anchors and producers and contributors are willing to bastardize the truth.

There’s an empty room at RT America in a gaping hole in the world of journalism with the loss of one of my closest friends, Ed Schultz. With his loss, there comes a loss of courage in reporting. The loss of a willingness to call balls and strikes. It’s a loss that couldn’t have come at a worse time, a time when reporters and anchors and producers and contributors at places like MSNBC and CNN and Fox and ABC are so terrified of losing their jobs that they’re willing to bastardize the truth. They’re willing to massage the facts and land where their corporate masters tell them to land. Not because they land on the truth, but because the money is just real good for them.

Ed Schultz was willing to give up the most lucrative job he ever had in his career, a job as the most talented news reporter MSNBC has ever had sitting in an anchor chair. A job that he quit because corporate number crunchers had political agendas that prevented him from reporting the news rather than delivering corporate and political pablum that was fashioned not by a news department, but by NBAs and CEOs and COOs who cared more about being delivery boys. Delivery boys for DNC political agendas and advertisers, and even the establishment government. They cared more about all that than they did actually delivering news programs that had a place for real reporters like Ed Schultz.

Everyone here at RT America’s going to suffer the loss of Ed Schultz for a very long time, and the business of journalism and responsible reporting, well, they’re going to suffer right along with us whether the industry has the honesty and the good sense to understand that or not.