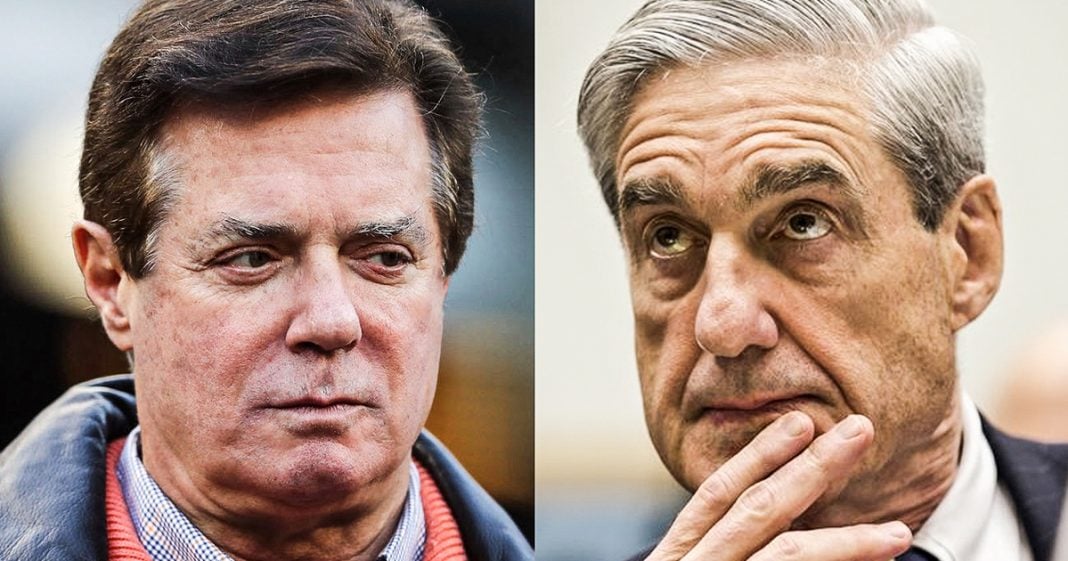 Paul Manafort is being kicked out of his VIP jail suite after lying to Robert Mueller about not being able to review evidence or meet with his lawyers. Recorded phone conversations show that Manafort was lying to prosecutors when he told them that he wasn’t allowed to meet with his attorneys, when in reality he claimed on the phone that he had met with his lawyers almost every day and had been through all of the discovery evidence for his upcoming trial. Ring of Fire’s Farron Cousins discusses this.

Things just keep getting worse for former Donald Trump campaign manager, Paul Manafort. Not only is he currently sitting in jail for trying to tamper with witnesses in his upcoming trial, but now he’s going to lose his very cushy VIP jail cell because he has continuously lied in court and lied to prosecutors.

Here’s the story of what has happened to Paul Manafort. First and foremost, we all know the guy’s in jail right now. And about a week or two ago, his lawyers said, oh, the poor guy is in solitary confinement, 23 hours a day. Well, that seems harsh. We know solitary confinement can really screw with people’s mental faculties.

But don’t feel bad for Paul Manafort because as it turns out, we found out this week, it’s not really solitary confinement because the man has his own private cell. He has his own personal telephone that he can make as many calls as he wants. He found a workaround to the prison system’s ban on email, so he was able to email. He had his own private bathroom, his own private shower, his own private work area. So, yeah, this guy was basically staying in a hotel room for a few weeks.

But now, he’s lost it all. Why? Because he told the court recently, this past week, Tuesday actually it was, at a hearing when he was trying to get one of his two trials delayed, ’cause he said, “Look, I haven’t had time to talk with my lawyers. I haven’t had time to go through the discovery evidence against me. I don’t know what’s going on because I’m stuck in this poor, pitiful jail cell.”

So then Robert Mueller steps up and he says, “Well, hold up, buddy. We actually recorded the phone calls that you made from prison, because that’s allowed. Here we have conversations with you telling people first and foremost you’ve been through all of the evidence. We have records showing that you’ve been talking to your attorneys every single day. And you’ve been acting like in you’re in this VIP cell. You told your friends you were getting the VIP treatment here in prison and that you had all your materials “like you would have at home.””

So, obviously, the judge doesn’t take too kindly to Paul Manafort lying in court, lying to prosecutors while being given the VIP treatment. So now, Paul Manafort has lost his cushy little hotel room and will be placed in the general population in the prison, just like everyone else who breaks the law. And this is what needs to happen.

You know, we all know all of the things that Paul Manafort has been accused of. Wire fraud, bank fraud, failing to register as a foreign agent acting on behalf of the Ukraine and Russia, the list goes on and on and that’s why he’s facing the two trials. But here, what this judge is doing, what the prosecutors are doing, sending him down to general population, taking him out of this VIP jail cell, is what needs to happen to CEOs and other white collar criminals who get popped for wrongdoing.

Don’t give them this Club Fed treatment. Make them go sit down there with the rest of the criminals like them, because that’s what they are. That’s what Paul Manafort is and I can promise you that when these two cases go to trial, one right after the other, Paul Manafort is not going to be happy with the outcomes. Because leading up these trials, we now have him lying to prosecutors, lying to a judge and trying to tamper with witnesses. On those three pieces of evidence alone, I think it’s pretty obvious and it’s going to be pretty obvious to everyone on those juries that Paul Manafort is an absolute liar and a criminal.