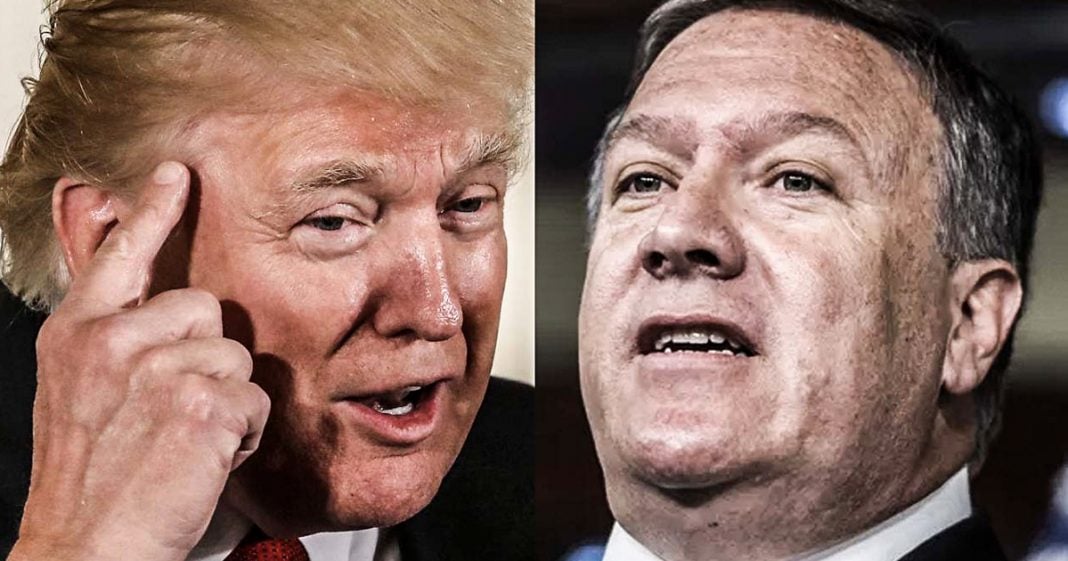 Mike Pompeo, Donald Trump’s freshly minted Secretary of State, took a trip to North Korea recently to hammer out some of the details from Trump’s recent trip and alleged agreement. According to Pompeo himself, the trip went “as badly as it could have gone,” and now we’re back at square one with North Korea. Trump failed, Pompeo failed, and we have no reason to believe that this trend will reverse itself, as Ring of Fire’s Farron Cousins explains.

Donald Trump’s Secretary of State, Mike Pompeo, recently traveled back over to North Korea to try to hammer out and iron out a few of the details that Trump and Kim Jong Un worked out in last month’s summit, and according to Pompeo the trip went just as bad as it could have gone. Pompeo actually went over to North Korea and somehow managed to make things worse. You see, here’s what happened. Let’s back up to Donald Trump’s little summit with Kim Jong Un, or his photo op as I should say because there is no real summit that happened.

We know that Trump talked about wanting to purchase real estate in North Korea, and we know that Kim Jong Un agreed to practically nothing. Nothing in writing, nothing in paper, nothing that was really binding by any means. Trump, the other day was talking about no, “Kim Jong Un’s going to honor it because we shook hands,” as if this is some kind of playground agreement instead of a real nuclear disarmament agreement.

Nonetheless, now Pompeo goes over there, realizing that nothing got accomplished from the summit, so he’s been tasked with making things finalized. Cementing them, getting a commitment from North Korea, and they basically said, “No.” They were so angry at the fact that the United States seems to be, “Unilaterally telling us to denuclearize! That is absurd.” It’s almost as if they had never heard that language before, so it makes you wonder what Trump and Kim Jong Un actually talked about in their meeting, because when Pompeo went over there and discussed this they appeared to blindsided by this information.

I do not believe that Donald Trump talked about denuclearization, there is no way. There is no way that he actually got them to agree to anything, because according to Pompeo and his super horrible, very bad trip they had no idea what he was talking about. They acted like the United States was being some kind of crazy person asking them to denuclearize suddenly, “Why would we do that?”

Pompeo did admit that he came back, and said, “Look, the process of denuclearization of North Korea is going to take decades, so really it’s going to be 20, 30 years that they’re still considered a nuclear threat around the globe.” So yeah, Pompeo goes over there to try to fix Donald Trump’s mess, only to find out that Donald Trump did absolutely nothing, and therefore, Pompeo somehow managed to make things worse.

Now, I don’t want to say that literally, everyone told you so, but I have to say that literally, everyone told you so. I mean, we have more than a dozen instances over the last 25 years when North Korea agreed to denuclearize, and not one of those times did they ever follow through. And if you thought for some reason Mr. Trump and Mr. Pompeo, that you guys were going to go over there and finally make it happen, because everybody else ignored it, first of all, that completely ignores the history of them working out these agreements, and second of all, it completely ignores the fact that North Korea has no intention whatsoever of ever denuclearizing voluntarily.

If the United States were to denuclearize maybe we could show the rest of the world that, “Hey, if we can do this you can do it too!” If we want to be a leader on denuclearization we got to start with ourselves and lead by example, because as long as we have these weapons here in the United States other countries are going to feel like they need them to protect themselves from us.

Our military industrial complex, our need to have the biggest, and baddest, and boldest, and most explosive weapons out there is what makes other countries do the same. This is on us, this is our fault, and Pompeo and Trump, and all of the other idiots in this administration are only going to make this situation worse because they have absolutely no idea what they’re doing.