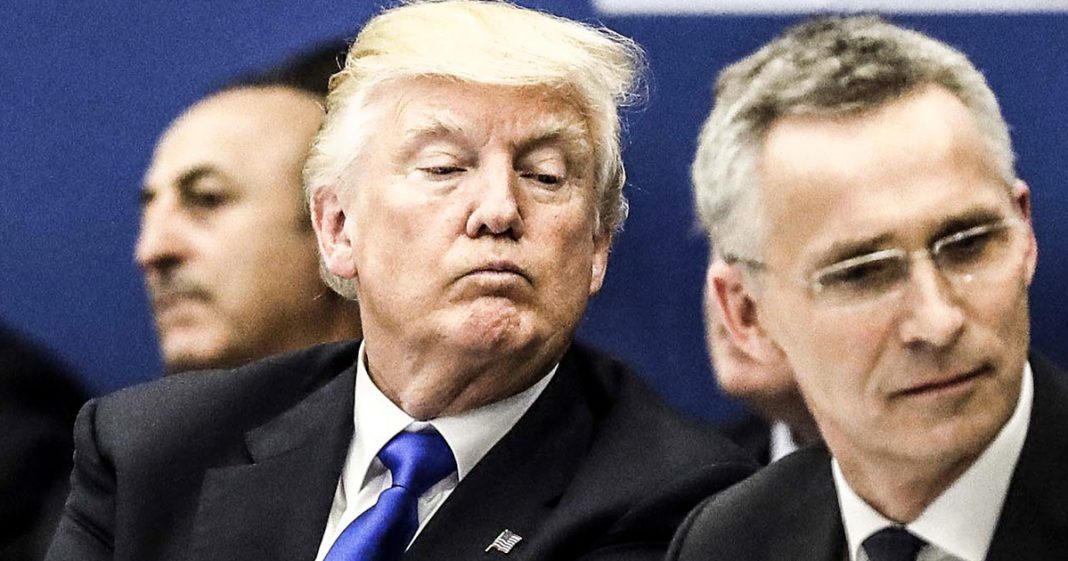 As predicted, Donald Trump completely embarrassed himself and the entire United States of America during his opening session at the NATO summit he’s currently attending. Trump decided to take yet another swipe at Germany and said that the country was being completely controlled by Russia. Ring of Fire’s Farron Cousins discusses the absurdity of Trump’s remarks.

President Trump is in Brussels right now for two days of NATO meetings. And as everyone absolutely predicted, he immediately, upon starting these meetings, made a complete ass of both himself and all of us here in the United States. He did that by telling German Chancellor, Angela Merkel, that Germany was completely absolutely controlled by Russia. Now, Trump made the comment because he says that Germany is being controlled by Russia because Germany is buying fuel from Russia. So apparently, just buying goods from another country, even when it is perfectly legal, means that you’re 100% beholden to them and controlled by them.

Angela Merkel fired back at Donald Trump and told him the story of how she had once lived in a Germany that was controlled by the Soviet Union, East Germany, while she was growing up. So she’s happy to say that today a united Germany is completely free from outside influence, and they make their own decisions. Now, that was not just her fighting back against Trump, that was her referring to the apparent control that people like Vladimir Putin have over Donald Trump. Because after all, if we’re going to talk about a country being controlled by Russia, we can’t ignore the fact that every single intelligence agency in the United States has admitted that Russia tried to interfere with our 2016 Presidential elections and that they’re gearing up to do it again in the 2018 mid-terms.

Russia is interfering. The evidence shows that. This isn’t trying to start a new Red Scare, these aren’t DNC establishment talking points, this is verifiable information. Nonetheless, Donald Trump decided to go over to NATO, make these absurd comments to Angela Merkel who he for some reason continues to antagonize more than any other world leader and embarrasses himself and the United States. And here’s the thing, we know, reports from yesterday actually, that 18 months ago, shortly after Donald Trump was inaugurated, during his first meeting with Angela Merkel, he straight up told her when they first sat down together that she owed him a trillion dollars.

We know that from the recent G7 Summit in Canada, he was very antagonistic towards Merkel more so than any of the other leaders there. So why? Could it be because Donald Trump is threatened by powerful women? Because I think 100% that is absolutely what it is. That’s why he chooses her to constantly pick on. Luckily, unlike Donald Trump, Merkel is a strong leader, and she’s not going to sit back and take it as Donald Trump makes up lies about her country knowing full well how much influence Russia currently has here in the United States because of Donald Trump. If he wants to point fingers at anyone who’s being controlled by Russia, I suggest he goes and practices that in a mirror because that’s about the only time that that statement is going to be true when it comes out of his mouth.