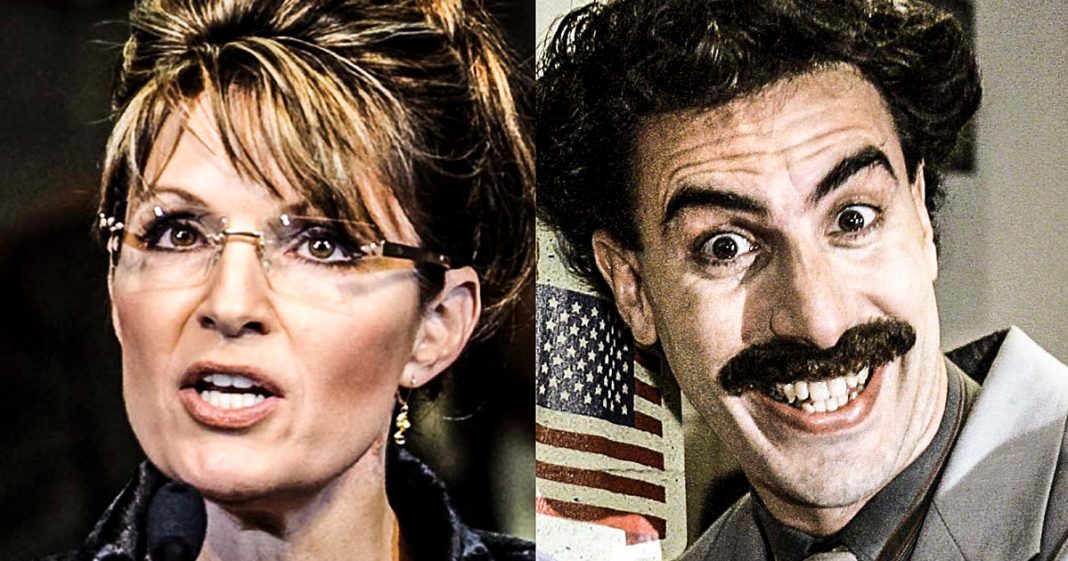 Sarah Palin has never been the brightest penny in the fountain, but her recent claims about being tricked by Sacha Baron Cohen into doing an interview with him make her look even duller. Palin claims that her speaker’s bureau set up the interview and that Cohen was wearing a disguise so she couldn’t recognize him. After a very long time, she finally decided to walk out of the interview. Ring of Fire’s Farron Cousins discusses how Sarah’s desperate need for relevance leads her to make such careless decisions.

Former half-term governor of Alaska/failed reality show host/former failed vice presidential candidate Sarah Palin was tricked recently by Sacha Baron Cohen. Sacha Baron Cohen is filming a new show for Showtime called “Who is America?” It’s a satirical show and he actually managed to get Sarah Palin to fly out to Washington, DC, to sit for an interview with him for the show. This is what made Sarah Palin so angry. They lured her to DC under the guise that she was gonna participate in a documentary about US veterans. Sacha Baron Cohen disguised himself basically as a disabled US veteran.

Palin says that she sat for the interview. There was all kinds of Hollywood-isms and sarcasm coming from Baron Cohen, who she did not recognize because of the disguise, and then eventually after sitting there for, she said, a long time, she got pissed off, ripped off her microphone, and walked out of the interview. Now, she says that she’s super upset not that she was tricked, but that Baron Cohen has the audacity to disguise himself as a disabled veteran. She’s even got people like Stephen Miller from the White House out there saying that Sacha Baron Cohen should “catch shit” for this, is what Stephen Miller actually said on Twitter in response to this story.

But here’s the thing. Whether or not you agree or disagree with Baron Cohen dressing up like this is beside the point. If you wanna talk about disrespecting veterans, then we have to look at the Republican party itself and you, Sarah Palin, because right now we have a President of the United States who has repeatedly, both on Twitter and in person, attacked a war veteran who happened to be a prisoner of war for five years and the president responded by saying, “I like people that weren’t captured.” How is that not considered an attack on a US veteran? That veteran, by the way, is John McCain and regardless of what you think about him, I personally hate his policies, that still happened to him.

Sarah Palin was his running mate and now she supports Donald Trump and has been dead silent about Donald Trump making fun of John McCain, the guy that put Sarah Palin on the map. Had it not been for McCain, nobody would give a crap who Sarah Palin is. Yeah, how about you go talk about that disrespect to a US veteran? How about you talk about the fact that George W. Bush started a war based on lies, sent our sons, daughters, mothers, fathers, cousins, brothers, whatever, over to Iraq and Afghanistan without proper equipment, getting thousands upon thousands of our soldiers killed. The ones came home with PTSD, we’re not taking care of them.

If you ask me, that’s a little bit more disrespectful to US soldiers and veterans than Sacha Baron Cohen tricking you into sitting down for an interview that you didn’t do because you wanna help veterans. You did it because you love the allure of cameras and lights and fame and attention because that’s what you are, Sarah Palin. It’s all about you. You’re like a miniature, far less successful Donald Trump at this point. You will do anything to get your face back on TV, even if you know deep down that you’re being tricked to do it.

Now look at you. You got double publicity from this ’cause Showtime’s still gonna air that clip and now everybody gets to talk about how mad you are because you go duped while ignoring the actual, real problems that US veterans are facing.