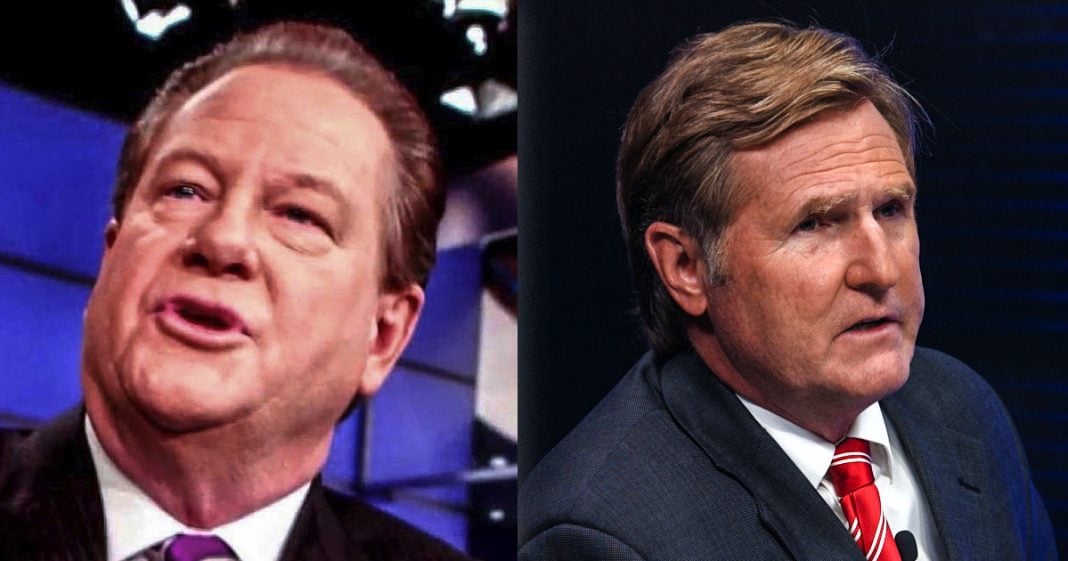 With the loss of Ed Schultz comes a loss of courage in reporting – the loss of a willingness to call balls and strikes. It’s a loss that could not have come at a worse time. A time when reporters, anchors, producers, and contributors at places like MSNBC, CNN, Fox, and ABC are so terrified of losing their jobs that they are willing to bastardize the truth, massage the facts, and land where their corporate masters tell them to land. Not because they land on the truth, but because the money is good.

Mike Papantonio: The media world was sent into a state of shock this past week when the news broke of Ed Schultz’s passing. There’s an empty room at RT America and a gaping hole in the world of responsible journalism with the loss of one of my very closest friends Ed Schultz. With his loss, there comes a loss of courage in reporting, the loss of a willingness to call balls and strikes. It’s a loss that could not have come at a worst time, a time when reporters and anchors and producers and contributors at places like MSNBC and CNN and Fox and ABC are so terrified of losing their jobs that they’re willing to bastardize the truth, massage the facts, and land where their corporate masters tell them to land.

Not because they land on the truth, but because the money is good. Ed Schultz was willing to give up the most lucrative job he ever had in his career, a job as the most talented news reporter that MSNBC ever had, ever had, sitting in an anchor chair. A job that he quit because corporate numbered crunchers had political agendas that prevented him from reporting the news rather than delivering corporate and political pablum that was fashioned not by a news department, but was fashioned by NBAs and CEOs and COOs who cared more about being delivery boys for the DNC political agendas and advertisers and even the establishment government.

They cared more about all of that than they did actually delivering news programs that had a place for real reporters. Real reporters like Ed Schultz. Everyone here at RT America will suffer the loss of Ed Schultz for a very long time. The business of journalism and responsible reporting will suffer right along with us, whether the industry has the honesty and the good sense to understand that or not. Ed Schultz, we’re going to miss you.

Farron Cousins: You know, I think one of the greatest stories I’ve heard of Ed Schultz and we heard it at the time … It actually came from John Nichols. He and John Nichols were also very close. He went to Wisconsin constantly during the Scott Walker recall election. John Nichols told the story after news passed of Ed about how Ed would go there, talk to the people in the streets, but not just for the camera. Ed would talk to these people throughout the night. No cameras. No reporters. No nothing. This wasn’t for optics. Ed wanted to talk to the people whose lives were being affected and get their stories. Not to go out there and tell the story and get ratings, but because he actually cared.

He wanted to know what was happening. He wanted to know how it affected the guy down the street and the guy on the other street. It was such a moving story that really captured what Ed was. It was never about ratings. It was never about trying to get the viewers in there. It was about what’s your story? What’s going on? What’s happening in the world? How does this affect the average people? You don’t see that. You do not see that anywhere else. There’s nobody that has replaced that and there won’t be. I don’t think there ever will be.

Mike Papantonio: Well, you know, truthfully we’ve seen this … You and I have seen it firsthand. You were a dear friend of Ed’s too. The words that he had for you were remarkable, Farron. He called you one of the most talented young reporters coming up in the business. Coming from Ed Schultz, that was a huge-

Mike Papantonio: … a huge compliment. What we saw happened with Ed, MSNBC … It’s impossible to talk about the Ed Schultz story without understanding what has happened with media in general. Ed used to be very critical. I remember when the BP oil spill took place. Okay? We were involved in it. I really hadn’t been up close personal friends with Ed really before that, but Ed invited me on MSNBC to talk about it. He allowed me to say the things that corporate media ordinarily would not let you say. In other ways, I wasn’t on there to apologize for BP. BP are a bunch of thugs. They destroyed an entire ecosystem. They killed 17 people.

I was able to go on and tell that story in a way that allowed me to really tell the story. I compared that to appearances that I made in other media where it’s, “Oh, well now, you’re going to have to tone that down. We can’t really say that.” Well, they couldn’t say it because BP was advertising. BP was spending tons of money. In effect, after those first few shows and I actually was able to go after BP and tell the story, management at MSNBC, “Well, maybe we’re being a little harsh.” Those statements came right along with “maybe BP is paying us a lot of advertising dollars right now.” There was no place except for Ed Schultz to where you could tell those stories.

As a matter of fact, he came back and followed up on BP. Tell that story. It’s a remarkable story. Came back and did a great series down here on the coast about how the catastrophe had affected lives.

Farron Cousins: Yeah. About five years, I guess it was after the spill, Ed was the only national reporter that came back down here. Everybody covered it while it was happening, but once they plugged the well and the oil starts washing up on the shore, everybody had left. Ed was still covering it, but then five years later did what nobody else did. Came down here, talked to you, talked to business owners-

Farron Cousins: … yeah, who’d had their businesses destroyed from this, their lives forever changed. He got their stories. He helped tell their stories and helped remind the public that hey, this catastrophe that happened on the BP, it wasn’t a five month catastrophe. It’s not even a five year catastrophe. This is a generation of destruction that BP caused.

Mike Papantonio: But the media had already moved on to shiny things.

Mike Papantonio: Other shine things. To me, the best analysis of the BP story when I compare it to other things … Finally, I got to tell you firsthand. This idea where Ed was fired. No. Ed could have stayed on. All he had to do was play Phil Griffin’s game. He had to play the Lac guy that owns NBC. I mean that runs NBC.

Mike Papantonio: You know, Lac and Phil Griffin were telling him, “You have to do this. You can’t tell …” He was there prepared. Very interesting story here. He was one of the very few reporters that … A lot of coverage, but a reporter that was there to really cover so we could understand what Bernie Sanders was all about. Okay? He’s at their house. He’s in front of them. He’s in their backyard ready to film. Kids are running around. Everything’s taking place. It’s a wonderful scene that he set up to let us know who Bernie Sanders is. Phil Griffin calls and says, “Well, you can’t do that. You got to go cover a story in Texas because it’s raining in Texas.”

Some nonsense like that. Well, all it was was the DNC owns MSNBC. The DNC was counting on the fact that Phil Griffin and that Lac character would do whatever they demanded, and so they shut Ed down.