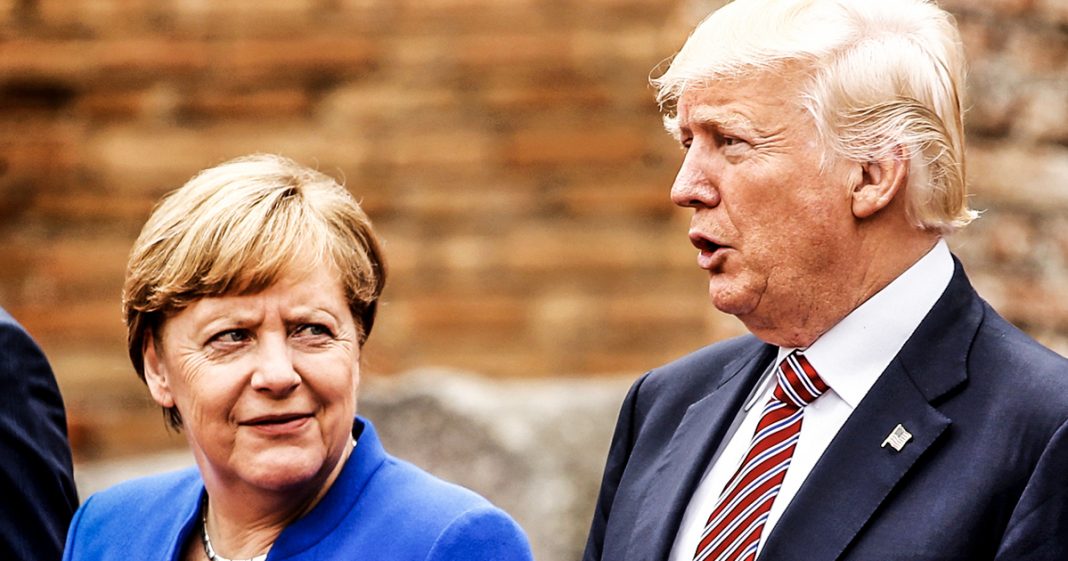 During Donald Trump’s first conversation with German Chancellor Angela Merkel he allegedly told her that she (her country) owed him one trillion dollars because the US has been paying too much for NATO. Not only is that figure inaccurate, but it shows that Trump has no idea how the NATO payments and protections work – let alone how disastrous his behavior is for the future of our foreign policy. Ring of Fire’s Farron Cousins discusses this.

Donald Trump right now is headed off to a NATO meeting where pretty much everybody expects him to make a complete ass of himself. See, Donald Trump, for quite some time now, even before actually running for political office, has been talking about how bad NATO is. He thinks it’s a bad deal. He thinks the United States pays too much and other countries don’t pay enough. And that’s why a story that came out late Monday afternoon kind of makes a lot of sense in the world of Donald Trump.

According to reports, the very first time that Donald Trump met with German Chancellor Angela Merkel, he immediately told her upon meeting her that she owed him $1 trillion. Specifically though, it was the United States that was owed $1 trillion. So the first time that Donald Trump meets with Angela Merkel, which was shortly after his inauguration, he suddenly turns into Dr. Evil, demanding $1 trillion from Germany because they allegedly weren’t paying enough for NATO.

Now, this story proves several different things. First and foremost, that Donald Trump knows nothing about how to treat our allies. If they do something wrong, if they’re not paying their fair share, you can be slightly harsh, but you don’t welcome them into the White House with a greeting of, “You owe me $1 trillion.” You still have to be civil. You have to be a human being, and you have to understand that we actually need their help in certain areas. So you cannot alienate them by being a jackass. The second thing it shows is that Donald Trump really has no idea how NATO works, does he?

Yeah, the United States pays a lot more. Yeah, the United States has a lot more money, therefore, we have a lot more at stake, so it would make sense for us to pay more for NATO because we have more money and we need their protections more than anyone else. Not to mention the fact that if we should get in some kind of trouble, if we need to call on our allies, NATO pretty much guarantees us that these people who we’re kind of footing the bill for will come and help us whether they want to or not. That’s the point of it.

Yeah, the United States might be getting ripped off to a certain degree here, but it’s only because we have so much to lose. We’re such a bigger country, both population wise and area wise. So yeah, we’re bigger. We pay more. That’s how it works, Mr. Trump. Why don’t you try looking at that instead of wondering why a tiny little country with a population of 1 million people isn’t paying their fair share? Whereas we, with 330 million people, are paying more than everyone else. It’s because we have more than everyone else. That’s how these international organizations work.

I suggest you take the time, you do a little bit of homework, and you find out how the world works. But more importantly, why organizations like NATO are unfortunately necessary right now. We can’t trust one another. We can’t even trust our own country to stay out of wars. But NATO, to a degree … Now, they’re not perfect and they’re not even great most of the time, but to a degree, they help to deescalate situations like that. We need that right now, and these other countries need it as well. Because if we didn’t have some kind of international body looking over our shoulders all the time, there’s no telling what kind of atrocities the United States and many other countries would start to commit all over the planet.