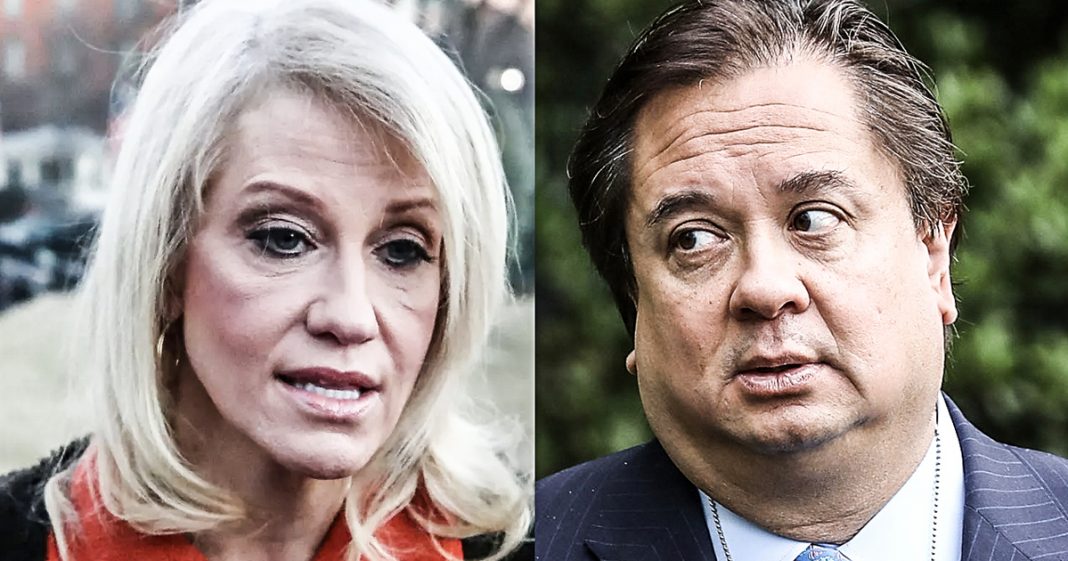 Trump administration officials are having a tough time living their lives right now, and the heckling that they are receiving is fully justified. But perhaps no one is having a harder time with the heckling than Kellyanne Conway, because according to her own husband, he’s giving her more grief about her job than protestors ever could imagine. Ring of Fire’s Farron Cousins discusses this.

It’s not easy being a staffer for Donald Trump or a member of his cabinet. On Monday we learned that Stephen Miller recently threw away $80 worth of sushi because a bartender walked outside, followed him and gave him the middle finger. I guess Stephen Miller thought that throwing away $80 worth of sushi was a great way to show that bartender who is boss. We’ve also had Scott Pruitt confronted at restaurants, Kirstjen Nielsen with Homeland Security. All these Trump administration officials just having a really hard time.

But according to George Conway, the husband of Kellyanne Conway, nobody is having a tougher time than Kellyanne herself. Why? Because, according to George, he is giving her more crap for working for Donald Trump than any of these protestors or activists could ever dish out to anyone else. Not only is Kellyanne Conway getting heckled out and about while she’s doing Trump’s bidding, but she is apparently getting it at home as well from her husband who again admitted that he gives her a ton of grief over the fact that she is an apologist for Donald Trump.

This is one of those very rare opportunities where I get the chance to say I told you so because several weeks ago when we started talking about the fact that George Conway was tweeting out all these horrible things about the president, trolling him on Twitter, basically accusing him of being guilty of everything that he’s been accused of, I said, “Wow, I can’t imagine how horrible things are in the Conway household.” George Conway comes out this week and confirms everything that we had predicted and this is good to be honest with you. George Conway needs to be giving her crap for what she does, not because she’s a bad wife, but because she is a bad person. She has made the choice to go out there everyday, much like Sarah Huckabee Sanders, and lie on behalf of this administration, lie to everyone’s face with impunity and act like it doesn’t matter. She has tried to demonize Democrats, Liberals, Progressives, everything that is not a Donald Trump Republican.

I have no sympathy whatsoever for any members of the Trump administration that are having trouble going out and getting a bite to eat or maybe even just sitting in their living room having their husband yap in their ear about how horrible their boss is. These people made the decision to not only work for a horrible person, but to be a horrible person themselves, and they deserve every bit of it.