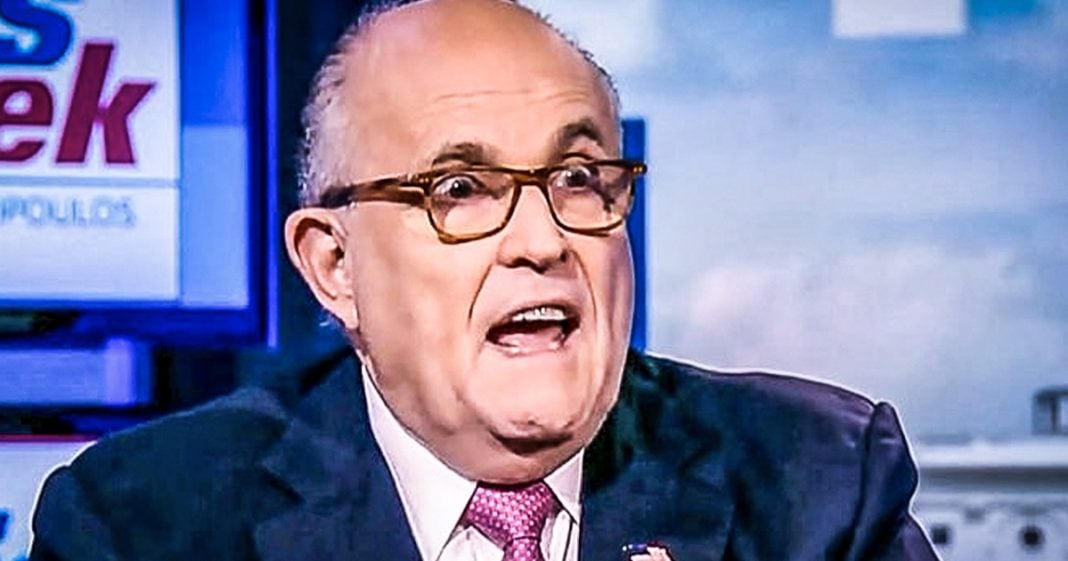 During an appearance on ABC’s This Week, Trump lawyer Rudy Giuliani slipped up and admitted that Trump likely told Comey to “go easy” on Michael Flynn, a move that most legal experts agree would 100% be considered obstruction of justice. Giuliani should have continued his break from TV because he keeps making things worse for his boss. Ring of Fire’s Farron Cousins discusses this.

Rudy Giuliani has been missing from television for quite some time now. A lot of us thought maybe it had to do with the fact that every time he went on TV he seemed to make things so much worse for his client, Donald Trump. Well, part of the reason has to do with the fact that he was out of the country. He was out doing some kind of goodwill mission on behalf of the administration, even though that’s not his job to do it, but now that he’s back in the country, he’s back on TV and he’s back to making things so much worse for his boss. This past weekend on ABC’s This Week with George Stephanopoulos, Rudy Giuliani accidentally admitted that Donald Trump obstructed justice. Take a look.

Rudy Giuliani: James Comey had never found any evidence of collusion. And rules out obstruction by saying the president had a right to fire me. So all the rest of it is just politics. I mean, the reality is Comey, in some ways, ends up being a good witness for us.

Unless you assume they’re trying to get him into a perjury trap by he tells his version, somebody else has a different version.

George S.: How is he a good witness for the president if he’s saying that the president was asking him, directing him, in his words, to let the Michael Flynn investigation go?

Rudy Giuliani: He didn’t direct him to do that. What he said to him was can you, can you-

George S.: Comey says he took it as direction.

Rudy Giuliani: Well that’s okay. I mean, taking it that way. I mean by that time, he had been fired. He said a lot of other things, some of which have turned out to be untrue. The reality is, as a prosecutor, I was told that many times. Can you give the man a break. Either by his lawyers, by his relatives, by friends. You take that into consideration, but that doesn’t determine not going forward with it.

See, here’s the thing Giuliani. If a prosecutor is asking for a little bit of leniency, go easy on this client, don’t sentence them to as much time, totally legal. Absolutely 100% happens all the time throughout this country. That’s what prosecutors do. That’s what defense lawyers do. Hell, even judges sometimes will say, “I’m going to take it easy on you.” But that’s only after a conviction happens.

If you walk up to the actual investigator before charges have even been filed and you say, “Hey, he probably did some of these things, but why don’t you just take it easy on him.” And you’re in a position of power over the investigator. That is 100% very easily provable obstruction of justice. According to you, that is what Donald Trump did. He went up to Comey and said, “As the investigator, and I’m your boss, how about you go a little easy on Michael Flynn there?” That’s obstruction. That’s illegal. You can’t do that, and here you are going on ABC telling people that that is what the president did.

I’m sure Robert Mueller is going to have a ton of fun with that interview. Hell, he may even play that clip before the grand jury, because at this point you said it publicly. That could be considered evidence.

Look, I absolutely 100% want Trump to be charged with obstruction of justice. I fully believe he obstructed justice. I fully believe he did everything that they’re investigating him for, but at this point, Rudy Giuliani is making it too easy. He’s making it way too easy for Robert Mueller and everybody else. So if Trump wants to keep up the façade that he did nothing wrong, he desperately needs to fire Rudy Giuliani, or at the very least, prevent this man from ever giving another interview as long as he is representing you.