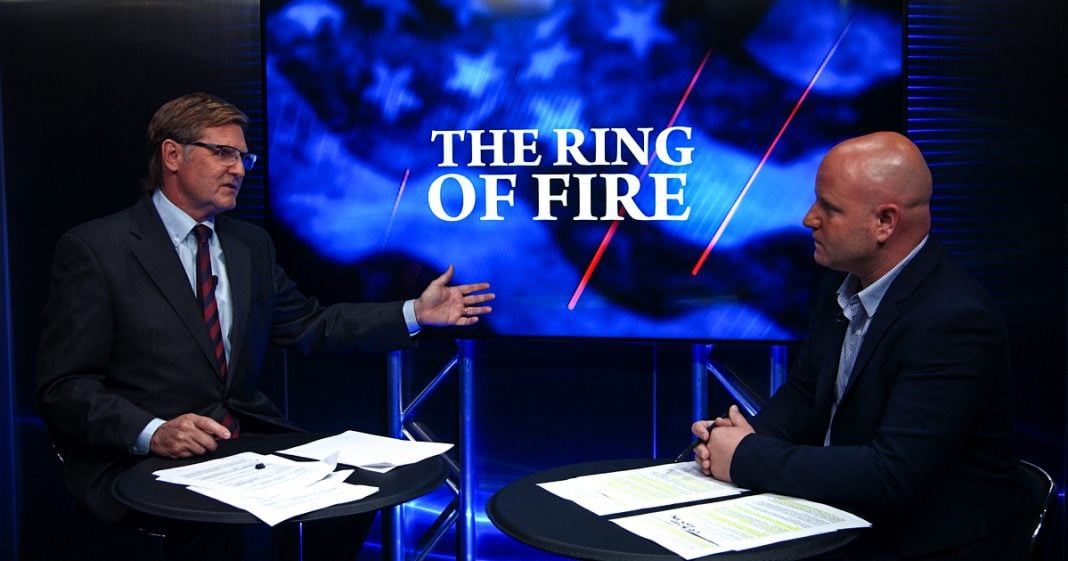 The new tax law that Republicans have been praising is actually rewarding companies for hiding money overseas. Ring of Fire’s Mike Papantonio and Farron Cousins discuss this.

Mike Papantonio: The new tax law the Republicans have been praising is actually rewarding companies for hiding their money overseas. I mean, I don’t have … That’s exactly what it is. We’re gonna give you a break. We want you to take the money. All that money that you made because of the tax breaks that you said you were going to share with employees. You said you were going to spread the wealth. Well, no, they didn’t spread the wealth.

What they want to do is hide it overseas now.I can’t make this up. They’re following this and here’s what. Here’s what they’re finding. They’re finding, first of all that the companies that are that were arguing, “Give us a tax break and it’s going to trickle down.” The first thing you’re doing is they’re buying back their own stock. Okay? That’s number one.

Number two is they’re giving their CEOs more money. They’re giving management more money. This is exactly … And number three, then they hide what they have left offshore, overseas. Then this is how it goes. They come back to the government and they say, they negotiate. Look, you know, was it … $40 billion dollars as we speak, about $40 billion window is overseas.

Farron Cousins: Worth of tax revenue.

Mike Papantonio: Yeah, that’s all we know of this point. $40 billion. Okay, so $40 billion’s overseas being hidden in Ireland or the Bahamas. Somewhere. Somewhere out in Hide Your Money Land.

Okay, so in Hide your Money Land. They then say to the government, “We’ll bring it back in if you let us bring it in by paying two percent taxes on it.”

And just basically holding the US government hostage.

Farron Cousins: Right? And we’ve seen it too many times in recent years during the Bush and Obama though, they’ll these tax holiday where you can bring it back right now, you’re not going to pay any money on it. Just bring it back to the United States.

So one of the big selling points that they used to sell this tax break was we’ve got companies hiding so much money off shore, which is true, but if we lower taxes, they’re going to bring it all back.

So they have actually given more incentive for these companies like Abbvie, that was just exposed in this Reuters report. What they do is, their headquarters is here in the United States.

Mike Papantonio: They’re the ones, by the way, that make testosterone, that’s killing men all over the country.

Farron Cousins: Right, so they’re based out of Chicago. They do all their work out of Chicago, but they actually claim their headquarter is down in the Bahamas. So that’s where all the profits go, all the money goes to the Bahamas. So none of it is technically US income, even though all the business is here.

So now when they bring it back, instead of paying 22%, they’ll get to pay nine percent. And because of the way the crazy business laws work, they can show we didn’t make a profit in the United States. We made-

Mike Papantonio: It actually shows as a loss and they get to take a tax break on top, on top of the hell, only having to pay nine percent.

They get another tax break by gaming it to where it looks like a loss.

Farron Cousins: And that is exactly what they wrote into the law, under the tax law.

Mike Papantonio: So let me clear something up. Well, not clear it up, but let me add to that. The same people who wrote these kinds of tax laws. Remember the last time we’re going to … we’re going to cut the taxes for people at the top and we’re going to cut it for corporations and they’re then going to spend all that money on employees and making their lives for employees better. That’s what they said. Same people who said that, that’s what they said. And now we see everything is just the opposite of that. Not a bit of truth to it.

The Supreme Court this week decided not to rule on two gerrymandering cases, which means that this year’s midterm elections could be decided before for the voting even begins.

Really, if you take a look at it, everything is set up in gerrymandering. We almost know we can predict very closely what’s going to happen just by understanding what the gerrymandering setup was.

Everybody was hopeful that we would get a fix to this before 2020, right? 2020 I think is when we, when we start reevaluating gerrymandering. But that’s you know, that’s after the election.

So this idea, first of all, the blue wave that we keep talking about, some of the blue wave was built into the idea that we’re going to change gerrymandering.

Mike Papantonio: And so when you hear the blue wave is getting ready to take place, it’s not all that everybody hates Trump. It is that they thought the gerrymandering was going to help the blue wave come back. What is your take on this story?

Farron Cousins: It’s disappointing. First of all, and these were two unanimous decisions by the Supreme Court to remand these back down to the lower courts, which means they’re going to be caught up for months and months. So we’re not going to get any answers in 2018, basically. But the two cases that they heard about, were both very interesting.

One of them, Wisconsin. Wisconsin Democrats were able to really prove that Republicans gerrymandered the state districts.

Mike Papantonio: Oh, there’s no question. Did you see pictures of it?

Mike Papantonio: The picture is like this is, you know, it’ll be one little thin stripe across part of the state and then it makes an L.

Farron Cousins: Yeah, and Democrats won 50% of the vote in Wisconsin, but Republicans won 60 out of the 99 seats.

Farron Cousins: Yeah. And so, but then in Maryland, the other case, it was the opposite. The Democrats took control from Republicans. Gerrymandered those districts to where Republicans couldn’t win. Same scenario. Republicans get more votes, but Democrats get more seats.

So the argument here in the past, it had typically been gerrymandering was done based on race.

Farron Cousins: This is political bias. Do you have a First Amendment grounds to file this case? So that’s where it’s very interesting.

Mike Papantonio: Let me explain that just a second. Race is what we call a suspect classification where it comes to the Supreme Court, looking at something, it rises to what we call to review. The importance of review becomes more important. So they said, look back when you were talking about race. Yeah, we would agree with you that our scrutiny of this law had to be higher, but now they’re way out.